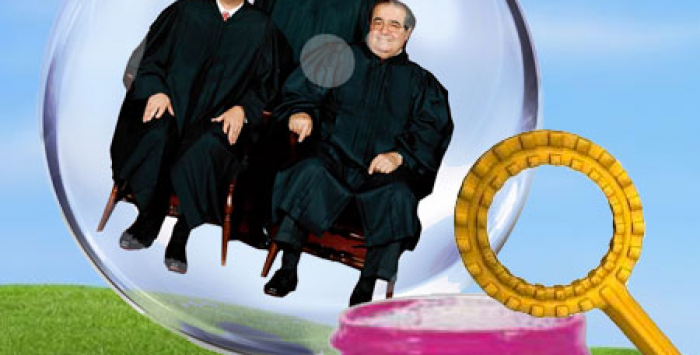 It’s been a tough week for supporters of health reform. Things haven’t gone so well at the Supreme Court. The government’s chief lawyer, Donald Verrilli, is being blamed for a lackluster performance. He wasn’t great, flubbing a basic question on whether the government could make us all buy broccoli, for example.

On the other hand, Verrilli wasn’t nearly as bad as many people thought, either. He made some perfectly good arguments that seemed unconvincing for the simple reason that conservative justices simply rejected the reasonable arguments he was making.

The oral argument was especially frustrating because the Supreme Court Justices were so economically misinformed. Watching the proceedings, the New Republic‘s Jonathan Cohn concluded, “The Justices Need Economics 101.” The distinguished economist Henry Aaron found Justice Alito “painfully detached” from basic understanding of how insurance markets work or what the new law is designed to accomplish. Writing in the Journal of the American Medical Association, Harvard’s David Cutler concluded: “I can say without hesitation that the Supreme Court failed its oral exam.”

The justices had little business debating the policy merits of the health reform bill in the first place. Over decades, Congress debated how to reform our dysfunctional, $2.8 trillion health care system. In 2010, Congress finally enacted a series of fragile political and administrative compromises to cover 30 million people and address other problems. In doing so, Congress drew upon many medical and public health studies exploring whether, when, and how the individual mandate helps to stabilize our national market for health coverage.

A more restrained, indeed conservative Supreme Court might have respected Congress’s judgments here. Years ago, conservative economist Thomas Sowell praised the restrained vision of the great Justice Oliver Wendell Holmes, who sought to ensure that “the game is played according to the rules whether I like them or not.” “The Constitution,” Holmes said, “is not intended to embody a particular economic theory.”

Justices’ offhand comments were especially jarring. Justice Scalia earned cheap laughs by asking government lawyers: “You really want us to go through these 2,700 pages?” Yes I do. The final bill devotes about one page for every $1 billion America spends on our health care system. And that’s with large fonts and wide margins. If the new law were formatted as a normal book, it wouldn’t be much longer than Sarah Palin’s memoirs. Justice Scalia might at least check his own script. He made fun of a notorious provision called the “cornhusker kickback” which isn’t even part of health reform.

President Obama and Congressional leaders devoted much of his first term to crafting and passing a complex health reform. Health reform was a centerpiece issue of the 2008 campaign. Several justices seemed rather contemptuous of this social insurance project.

Consider the following comments by Justices Alito and Roberts:

(Roberts) “It seems to me that you cannot say that everybody is going to need substance use treatment or pediatric services, and yet that is part of what you require them to purchase.”

(Alito) “[A] young, healthy individual targeted by the mandate on average consumes about $854 in health services each year. So the mandate is forcing these people to provide a huge subsidy … It is requiring them to subsidize services that will be received by somebody else.”

The Chief Justice is certainly correct that most people don’t need substance abuse treatment – though hundreds of thousands of people who do need these services face serious financial barriers. Fewer people require the intensive treatment my brother-in-law requires because he was born with a serious genetic defect. Justice Alito is right that policies such as the individual mandate lead the young and healthy to subsidize others, at least at certain moments in life’s trajectory. There is nothing wrong, nothing unconstitutional about requiring those of us who’ve done well in life’s lottery to sometimes subsidize our less-fortunate fellow citizens.

Is the Court deliberating in a bubble?

Dahlia Lithwick recently chronicled the Supreme Court’s evolving stance regarding gay rights. The court has moved in a more liberal direction. Its path to these decisions remained troubling.

[W]e come to the Court, play by its rules, and tell the Justices stories they like to hear about people who remind them of themselves. The Justices don’t get out much. All of the current nine attended two law schools; their clerks mainly come from seven law schools; cases are argued by a shrinking number of highly skilled oral advocates … We may well wonder, then, where they get their information about the world outside their chambers, and how they learn … how much they don’t know about that world.

I certainly wonder. The Court might damage or destroy the centerpiece of the Obama presidency. This would be an abuse of judicial power. It would also hurt millions of people whose pleas for help seem quite abstract to men in robes who might snatch that help away.

Harold Pollack is Helen Ross Professor of Social Service Administration, and Faculty Chair of the Center for Health Administration Studies at the University of Chicago. He has written about health policy for the Washington Post, New York Times, New Republic,  The Huffington Post and many other publications. Previously, he wrote Happy birthday, health reform for the Health Insurance Resource Center. His essay, “Lessons from an Emergency Room Nightmare,” was selected for The Best American Medical Writing, 2009.