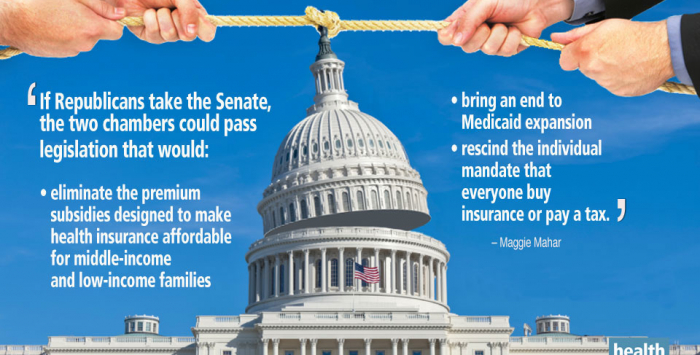 While all eyes focus on the presidential race, the ultimate fate of the Affordable Care Act (ACA) could depend on the Senate contests in the states.

Even if Mitt Romney were elected, he alone could not overturn major provisions of healthcare reform. Only Congress can pass the legislation needed to change the ACA.

Republicans are expected to maintain control of the House, but if Democrats hold the Senate, they will be able to block House bills aimed at eviscerating “Obamacare.”

What is at stake

If Republicans take the Senate, the two chambers could pass legislation that would:

Under “budget reconciliation,” Republicans would need only a simple majority to pass such legislation. In the Senate, 51 votes would do it. Today, Republicans hold 47 seats.

Razor-sharp margins in many states make it impossible to predict outcomes. Polls only give us a blurry snapshot of one moment in time – and in states like Arizona, candidates have been trading leads from week to week.

Much will depend on the demographics of who turns out to vote.

What could happen: Three scenarios

If Obama is re-elected, Republicans would have to hold onto their 47 seats, and pick up four in order to take over the Senate. Even then, the president could be expected to veto most attempts to gut health care reform.

If Romney wins the White House, Republicans would need to net just three seats; in a tie, Vice President Paul Ryan would cast the 51st vote.

There is a third possibility: Democrats have a shot at winning Senate races four states where Romney should beat Obama (Montana, Missouri, Arizona and Indiana.) Conceivably, we could wind up with a Republican White House and a Democratic Senate. For reform’s opponents, this would be extraordinarily frustrating. It’s not likely that Senate Democrats would compromise on key ACA provisions that enjoy widespread support, such as premium subsidies.

States where Republicans could lose seats

MASSACHUSETTS: In a race that could be captioned “Wall Street vs. Women,” Democrat Elizabeth Warren, a spunky consumer advocate who has taken on the big banks and spearheaded the creation of the Consumer Financial Protection Bureau, faces incumbent Republican Scott Brown. Bloomberg reports Brown has received $2.7 million from Wall Street, compared with $273,378 for Warren. Warren appeals to a different base.  As of mid-August, 43 percent of the Harvard Professor’s donations had come in amounts of $200 or less – compared with 15 percent of Brown’s .

Meanwhile, Brown’s voting record on equal pay and access to contraception has contributed to an enormous gender gap. As of Oct. 11, Warren enjoyed a 26-point lead among likely women voters while Brown held an 18-point lead among men.

But recently, Warren’s overall popularity has been slipping. The highly-respected non-partisan Rothenberg Report now lists the race as “toss-up/tilt Democratic.”  Six days before the election, a Boston Globe poll showed the candidates locked in a dead heat, with 47 percent each.

In Arizona, U.S. Rep. Jeff Flake is running against Republican-turned-Democrat Richard Carmona. A Puerto Rican raised in Harlem, Carmona fought in Vietnam, and then earned degrees in nursing, biology, medicine, and public policy. Under George W. Bush, he became Surgeon General. In 2006, Carmona left the post, accusing the administration of political interference.

Where Republicans hope to pick up seats

MONTANA, NEBRASKA and NORTH DAKOTA: Montana Incumbent Democrat Jon Tester won in 2006 by only 3,562 votes out of 400,000, and Tester acknowledges that Romney will take the state. Republicans also are counting on Nebraska and North Dakota, where Democratic senators are retiring – though in North Dakota, high-energy former Attorney General Heidi Heitkamp has surprised Republican Rick Berg. Rothenberg calls all three “toss-ups.”

Where Democrats may lose seats

WISCONSIN: With Democratic Senator Herb Kohl retiring, Wisconsin was seen as a safe race for Democratic Rep. Tammy Baldwin. But former Republican Gov. Tommy Thompson has turned it into an ugly contest – another “pure toss-up.”

“Whoever wins the Senate, I would be surprised if anybody had more than a 51-seat majority, says Cook’s Jennifer Duffy.