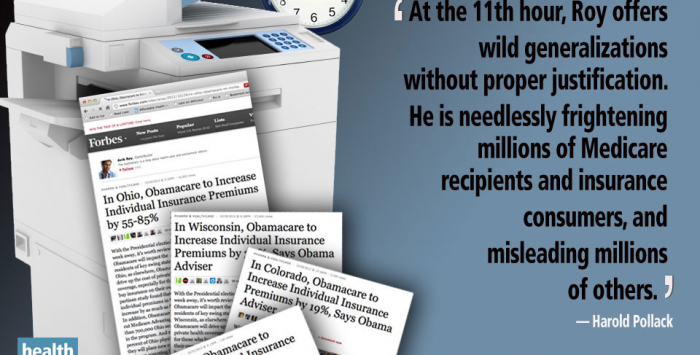 It’s genuinely hard for those of us who are partisan advocates and issue experts to properly balance these two roles. It’s especially hard because one must discuss complicated issues with people who can’t always evaluate the fine print.

On both sides, we face the temptation to shade things. Avik Roy‘s pieces in Forbes this week illustrate the resulting dangers. Roy is an outside advisor and surrogate for the Romney campaign. These postings purport to demonstrate the harmful impact of Obamacare on many battleground states. I – along with many other health policy experts – believe that these pieces are misleading.

Consider this one: “In Wisconsin, Obamacare to Increase Individual Insurance Premiums by 30%, Says Obama Adviser.” I’ve written on some of the technical issues before. But Forbes‘ own Rick Ungar says it best: “Like so much of what comes from the Romney campaign, a kernel of truth rarely tells anything close to the entire story.”

… here is what the Gruber report actually predicted – and note that I have included the parts Mr. Roy found inconvenient and have highlighted the same:

“Overall, we find that 41% of the market will pay less as compared to pre-reform premiums. Their average premium reduction is 56%. The 59% that pay more experience an average increase of 31% …

Ungar notes various other concerns, then gets down to “what I find truly disturbing:”

In Roy’s article, he includes a chart from the Gruber study that purports to reveal that only 5.5 percent of Wisconsinites purchasing individual coverage will see their premium costs go down.

What Avik somehow fails to reference is the fact that the included chart represents the premium changes without the tax subsidies provide by the Affordable Care Act.

There’s more. Check out Ungar’s emphatic dissection, and draw your own conclusions.

Roy posts a separate batch of columns arguing that Obamacare will cause doctors to refuse new Medicare patients. (We fought about this on Twitter. Roy added a supporting link, but hasn’t addressed the underlying problems.)

Consider this one: “In New Hampshire, Obamacare to Cause 20% of Doctors to Stop Accepting Medicare Patients.” This piece is based on a new physicians’ survey by the Physicians’ Foundation, which Roy describes as

… one of the largest physician surveys ever conducted in the United States, with 13,575 respondents. They asked physicians a broad range of questions, including several about their views on Obamacare. 41 percent of New Hampshire physicians said that the Affordable Care Act made them “less positive about the direction and future of healthcare in America.” Only 24 percent said it made them feel more positive.

I chased down the survey. It’s an email blast sent out to about 630,000 doctors across the country. The resulting response rate was 2%. That’s not a typo – 2%.

Roy responded over Twitter hat political polls have low response rates, too. That methodology is useful for some purposes – for example, if one wants instant voter responses regarding who won some debate. It’s wholly inadequate to explore physicians’ responses to complex policies. By way of comparison, my Incidental Economist colleague Aaron Carroll completed two physician attitudinal surveys with response rates over 50 percent. My colleagues and I just conducted a national survey of dentists’ attitudes towards HIV screening. Our response rate: 70 percent.

Roy begins with the broadside:

A new survey of physicians has found that 25 percent of doctors in New Hampshire intend to place new or additional limits on accepting Medicare patients, with 20 percent altogether refusing to accept new Medicare patients, because of Obamacare’s impact on the fees that Medicare pays to providers of health-care services [italics added.]

I see nothing in this survey to justify this statement.

Question 39 does read: “AS A RESULT OF THE ONGOING PROBLEMS WITH MEDICARE FEE SCHEDULE UPDATES, WHAT ACTION HAVE YOU TAKEN OR ARE YOU PLANNING TO TAKE?” Some physicians would “place new or additional limits on Medicare acceptance,” or “accept no new Medicare patients.”

Here’s the thing. That isn’t a question about health reform, which does not cut physician fees. This question concerns broader Medicare policy, including the periodic “doctor fix” problem that predates the Obama presidency.

There’s also Question 40: “IF MEDICARE FEES DECREASE BY 10 PERCENT OR MORE, WHAT ACTIONS WILL YOU TAKE?” Again, this has nothing to do with health reform. Roy confidently asserts that the Affordable Care Act “will require” such cuts. It doesn’t. ACA includes some provisions to raise primary care physician reimbursement.

When I asked Roy where he finds this requirement, he added this link regarding the embryonic Independent Payment Advisory Board (IPAB), and tweeted: “IPAB now governs Medicare spending growth. IPAB can only reduce reimbursement rates; not cost sharing, eligibility, benefits.”

Roy offers sheer speculation here. For one thing, “reimbursement rates” covers a multitude of activities from hospital payments, durable medical equipment purchases, and more. There’s no reason to think that IPAB would enact foolish, politically self-immolating measures that would lead 20 percent of physicians to leave Medicare. Moreover, Roy’s speculations about physician behavior are based on a rudimentary survey which 49 out of 50 physicians chose not to answer, and (within that survey) two rudimentary questions that aren’t really about health reform anyway.

At the 11th hour, the Romney campaign is struggling to keep pace. So it is flooding the airwaves with dicey commercials about the auto industry rescue, a fact-checker-debunked and ethically-dubious welfare ad, and (not least) scare appeals to seniors over Medicare.

In keeping with this desperate rush, Roy offers wild generalizations without proper justification. He needlessly frightens millions of Medicare recipients and insurance consumers, and needlessly misleads millions of others. This is a cautionary example.