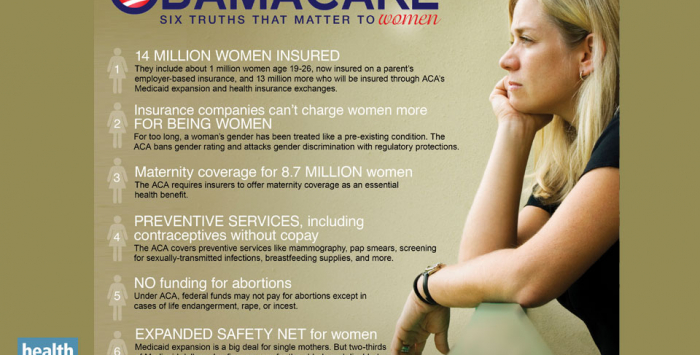 Extreme statements of a few Senate candidates have brought the abortion issue center-stage in this electoral campaign. Abortion certainly deserves attention. (I wrote about it in The Nation here.) Yet it should not overshadow other women’s health issues, which were a major focus of health reform. These parts of the Affordable Care Act (ACA) get less attention than they should.

1. Most obviously, ACA will insure more than 14 million women, who would otherwise go uninsured. About one million of these women are young adults, age 19-26, insured on a parent’s employer-based insurance. The remaining 13 million women will be insured through ACA’s Medicaid expansion or the new health insurance exchanges.

2. ACA bans discrimination against women within the individual and small-group insurance market. Women have historically paid higher premiums – not because insurers are evil, but because women have higher expected costs. In effect, women have been treated as if possession of two X chromosomes were a pre-existing condition. Researchers at the National Women’s Law Center examined policies in states that permitted gender-rated individual and small-group policies. They found: “Even with maternity coverage excluded, nearly a third of plans examined charge 25- and 40-year-old women at least 30% more than men for the same coverage.”

The differences can be striking. For example, women nonsmokers are sometimes charged higher premiums than male smokers of the same age. ACA bans gender rating. Its combination of an individual mandate, regulatory protections, and subsidies alters the fundamental conditions of insurance markets that made such gender discrimination the likely outcome.

3. ACA will provide maternity coverage to 8.7 million women who otherwise go without these benefits. For obvious economic reasons, women’s insurance policies within the individual market often exclude maternity coverage. ACA requires insurers to offer maternity coverage as an essential health benefit. This will be a major relief for millions of women who do not work for large employers, and who now would face significant financial and logistical challenges in the event they become pregnant.

4. ACA requires coverage of preventive services, including contraceptive and other reproductive health services without copayment.  ACA covers evidence-based clinical preventive services for women without patient copayments or deductibles. These include many key services and diagnostic screening such as mammography, pap smears, screening for sexually-transmitted infections, breastfeeding supplies, and smoking cessation services for pregnant women.

From a public health perspective, generous contraceptive coverage is one of the most important aspects of health reform. It is likely to reduce both unintended pregnancies and the number of abortions. Surveys indicate that one-third of US women who use reversible contraception would switch to more reliable methods if they did not have to worry about cost. Just this month, a major study reported that provision of no-cost contraceptives, with an emphasis on long-acting methods such as IUDs, was associated with large reductions in abortion rates, repeat abortions, and teen births.

5. ACA does not cover abortions.  Federal funds under ACA do not finance abortion care, through either Medicaid or through the new insurance exchanges. Under long-standing policy known as the Hyde Amendment, federal funds may not pay for abortions except in cases of life endangerment, rape, or incest. (Seventeen states use their own Medicaid funds to pay for abortions.)  ACA effectively extended the Hyde Amendment to millions more women. Health plans cannot be required to cover abortions as part of their essential health benefits package. This aspect of health reform disappoints many liberals and feminists. It disappoints me, too. But this reflects the uneasy historic compromise whereby abortion remains legal, yet the federal government effectively chooses not to pay for it.

6. ACA expands and strengthens Medicaid – and this is a women’s issue, too. You might not think of Medicaid as a women’s issue. It is. Single mothers with children comprise a huge subgroup of Medicaid recipients. Two-thirds of Medicaid dollars finance care for the elderly and the disabled. Women comprise about two-thirds of nursing home residents in America. Care for many of these women is financed through Medicaid. Women are the dominant majority of caregivers for disabled parents, siblings, and children who rely on Medicaid, too.

ACA expands Medicaid eligibility and services – with the federal government paying virtually all of the additional costs. This financing piece is important for many reasons – not least that it preserves the long-term viability of this state-federal program. And here, as Henry Aaron and I have written at this site, the contrast between the two parties is especially stark. Governor Romney and House Republicans have pledged to cut federal contributions to Medicaid by an estimated 38 percent over the next decade. That’s a much deeper cut than anything contemplated in Medicare or other areas of the federal health budget. This may be the most worrisome women’s health issue in the 2012 election.

Federal researchers have summarized a broad array of ACA’s benefits for women’s health:

All and all, ACA is an important accomplishment for women’s health, more than most people realize.