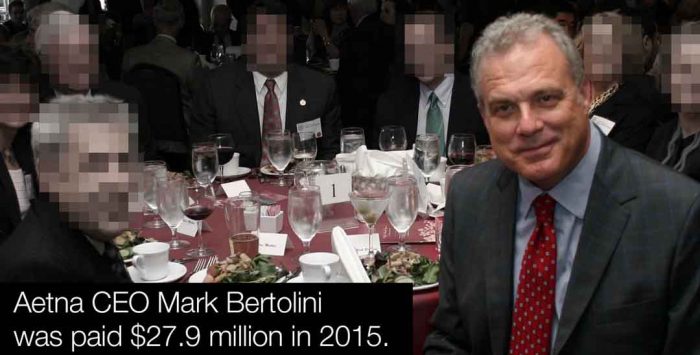 There are plenty of villains to go around.

It’s heartening to hear that thousands of folks are showing up for town hall meetings to let their members of Congress know they’re freaked out about the potential that they’ll lose their coverage if Congress recklessly repeals the Affordable Care Act. Congress people definitely need to get an earful.

But if you think Congress is the only perpetrator at the crime scene of this nation’s truly criminal healthcare system, think again. As an industry insider, I know that for every dastardly tactic employed by politicians to forestall expansion of affordable coverage to Americans, there’s an equally sinister tactic that’s been employed by the health insurance industry.

You might not have heard that as part of an ill-planned strategy of intimidation to persuade regulators and a federal judge to approve the deal, Aetna purged thousands of its customers, forcing them to scramble to find alternative coverage last fall.

OK, that sounds a little too abstract. So, let me put it this way:

To win approval of a $37 billion deal that would reduce competition and make a handful of executives considerably wealthier than they already are, Aetna decided to make life considerably more uncertain for hundreds of thousands of human beings who had been paying good money to Aetna for access to medical care.

We’re not talking about widgets being discarded by a manufacturer. We’re talking about men, women and children, some of whom you might know and, who knows, maybe even care more about than Aetna’s rich executives. People with names, addresses and social security numbers. People who go to church and school and soccer games. People who unfortunately get sick or hurt every now and then and who, in anticipation of that possibility, buy insurance they think will be there when they need it. People who can’t even imagine what it’s like to be paid $27.9 million a year, like Aetna CEO Mark Bertolini was paid in 2015. People, in other words, like you and me.

This is not the first time a big for-profit insurer has cut loose thousands, and in some cases millions of customers for one profit-related reason or another, including customers who’ve never been late a day on a premium payment. The companies I used to work for – Cigna and Humana – have dumped an untold number of people over the years to boost profits. In fact, between 1998 and 2001, the country’s biggest insurers dumped hundreds of thousands of mostly elderly human beings who were enrolled in their Medicare HMOs. Those folks got dumped because the insurers weren’t happy with the payments they were getting from the government back then.

(Side note: Anthem’s bid to reduce competition even further by buying Cigna for $54 billion was also blocked this week by a federal judge.)

But Aetna stands out among the people dumpers. Back in the 1990s, after buying up several smaller companies, Aetna had the dubious distinction of being at once both the biggest and one of the most unprofitable health insurers in the country. Shareholders started running for the exits. The share price dropped like a rock. To turn the company around, Aetna’s CEO at the time ordered a new software program to do one thing of supreme importance to remaining shareholders: identify customers who were likely causing Aetna to bleed red ink. Once identified, those customers were, to use the Wall Street Journal’s term of art at the time, “dumped.” When all was said and done, Aetna had shed eight million of its customers. Eight million of its human being customers.

Fast forward to 2017. Before Aetna’s acquisition of Humana could be consummated, it would have to pass federal antitrust muster. Humana executives, especially CEO Bruce Broussard, were counting on that: Broussard was set to get a $40 million golden parachute payout once the deal closed. To enhance the chances that the deal would indeed close, Aetna engaged in some shenanigans that didn’t sit well with a federal judge.

We learned from documents Aetna had to turn over to a federal court (after the government sued to block the acquisition) that Aetna for no apparent reason other than to increase the odds that regulators would approve the deal, decided last year to drop out of several Obamacare markets – including markets where it was making a profit. Markets like Florida.

One of the documents made public was a transcript of a communication between Aetna employees.

“Really disappointed we are pulling the plug on Florida,” wrote one of them, who followed up with this: “I just can’t make sense out of the Florida decision … Never thought we would pull the plug altogether. Based on the latest run rate data … we are making money from the on-exchange (Obamacare) business.”

Based on that and other documents, U.S. District Judge John Bates said Aetna’s Obamacare market withdrawals were, as Axios reporter Bob Herman wrote, “politically motivated to help Aetna’s case in the lawsuit.”

CNN was even more blunt. “Judge: Aetna lied about quitting Obamacare,” was the CNN headline on a story about Bates’ decision.

Bates ruled, CNN reported, that “Aetna wasn’t being truthful when the health insurer said last summer that its decision to pull out of most Obamacare exchanges was strictly a business decision triggered by mounting losses.”

CNN said Bates concluded that Aetna’s real motivation for dropping Obamacare coverage in several states was “specifically to evade judicial scrutiny” over its merger with Humana.

So, exactly how many human beings did Aetna dump as part of its scheme to “evade judicial scrutiny? Three quarters of a million.

Folks, why do we put up with this? I don’t know of any other country in the world that would allow insurers to treat their human being customers with such little regard. Yet we seem to think this is somehow OK. That it just is and always will be. That’s what the insurance industry wants us to believe, and, take it from me, they spend millions of dollars every year to make us and our politicians believe it.

Whenever I write something like this, some people invariably will say in the comment section that insurance companies, like any other company, have to make a profit to stay in business. That’s just the free market at work.

Well, health insurance companies are not like other companies. If Apple were to stop selling iPods because they were no longer profitable, that decision wouldn’t have much of a bearing on whether I lived or died. But if I were enrolled in a health plan Aetna decided to stop selling as part of a scheme to influence a judge, or just for the hell of it, and I couldn’t find another plan I could afford (which very well could happen to millions of us if the ACA is repealed), well, that absolutely would have a bearing on whether I live or die.

Having to put up with insurance companies is bad enough with Obamacare. But as long as Obamacare is still the law of the land, most of us should be able to find another health plan if our insurer decides to dump us. If Obamacare is repealed (or even “repaired” the way health insurers want), all bets are off.

Get ready for the dump, folks.