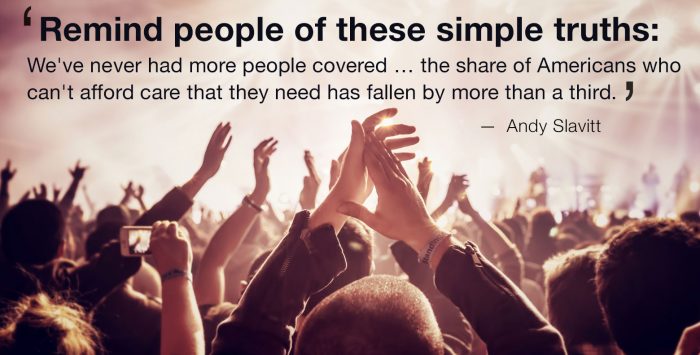 Health Action 2017, Families USA’s annual conference devoted to strategies and techniques for improving Americans’ access to healthcare, convened in Washington D.C. last week under the shadow of Republican vows to repeal and (maybe, eventually) replace the Affordable Care Act. The dominant focus was inevitably on protecting hard-won gains in access to insurance and healthcare, now threatened by Republican control of the presidency and both houses of Congress.

Attendees were people who put in long hours and have devoted years, and in many cases decades, to expanding healthcare access to vulnerable Americans. They included ACA enrollment counselors, staff of social service agencies and federally qualified health centers, political advocates and organizers, and healthcare scholars and researchers. All but universally, these are people who knew on the night of November 8 that progress in expanding access and controlling costs, won with Herculean effort and paid for in political blood, was in mortal peril.

The conference, to my mind, fulfilled the deepest purpose of such events. It was not so much a matter of convincing the troops that the goal of preventing the repeal of the ACA and further evisceration of Medicaid through block-granting is attainable. Some marquee speakers argued forcefully that those goals are achievable, others implied that the odds are long.

Strength lay more in the collective demonstration of expertise and commitment, evident as much in breakout workshops as in plenary sessions: These sessions showcased, for example:

This detail work, with well-informed audience participation, transmitted a sense of institutional and cultural strength. Plenary speakers paid tribute to this strength, and the values underlying it, and the accomplishments that had flowed from it in the form of ACA passage and enactment, resulting in measurable gains in insurance, access to care, financial protection, and medical cost control. While elected officials pretty much stuck to standard talking points, other headline speakers offered wide historical and ethical perspective. 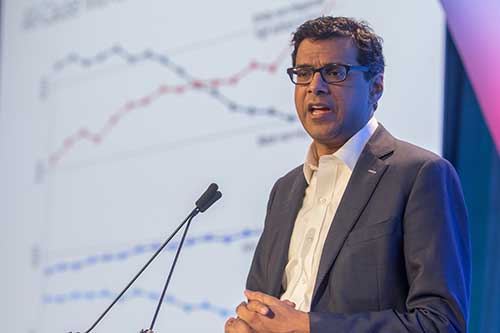 Surgeon-author Atul Gawande spoke directly of the institutional resilience of those in the room, the medical profession, and the American private sector at large. Set against the hatred and fear appealed to by Trump, and a political establishment given over to his control, he suggested, are ethics of inclusion and mutual respect embodied in the contemporary American workplace: “The Trump White House would not make it through HR,”  Gawande said.

Families USA, he told the audience, is one of many institutions working to offer respect and value to those left behind in the current economy. Ditto for the medical profession: “We have a core set of values that all lives have worth. That we’re committed to reducing suffering and enabling the health and well-being of all to reach our potential. Those have never changed with our politics, and they won’t.”

Zooming out further, Gawande asserted that we are in the midst of a momentous century-long shift in medical art, moving from coping with unexpected crisis to anticipating, preventing and managing disease. He emphasized that extending access to this evolving “incremental medicine” into every nook and cranny of the country is an enormous logistical and societal challenge. On the whole, he affirmed, we’re not doing badly.

Andy Slavitt: Drop everything and save ACA 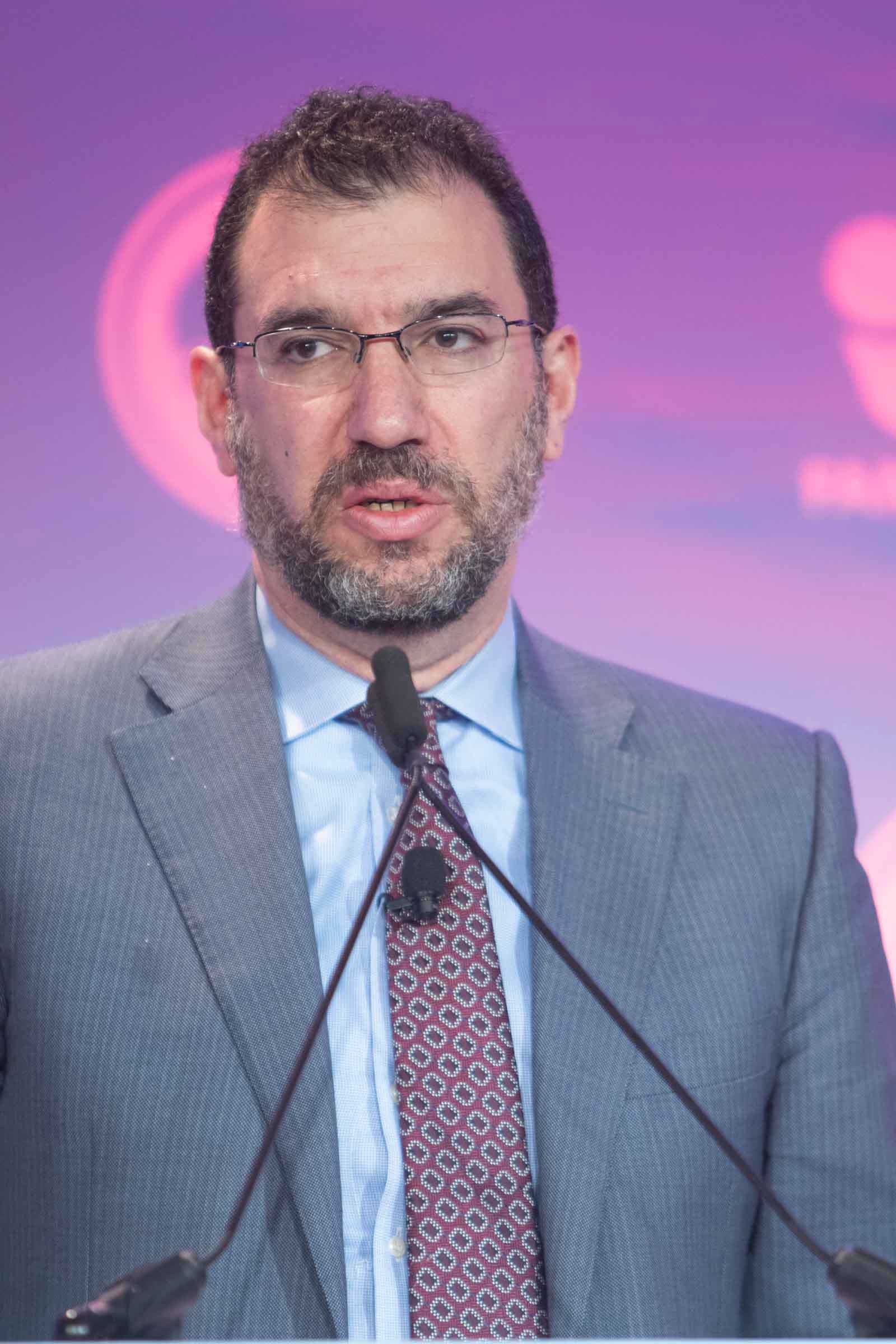 Andy Slavitt, the recently departed acting CMS director initially recruited to lead the rescue of the online federal health insurance marketplace, HealthCare.gov, after its disastrous launch in October 2013, made a forceful case that the ACA had spurred major leaps in access, outcomes and cost control. Slavitt projected confidence that ACA repeal could be prevented, suggesting that Republicans were aiming “to do something that’s never been done: rip away benefits from millions.” He exhorted the audience to respond to

a drop-everything moment, when something so important happens that no matter what you’re doing, you stop and devote all your energy to the thing that needs to be done. And we’re at one of those moments right now for millions of American families. It’s a moment to tell the truth to the American public. Get past the fake facts, the alternative fake facts, the alternative news … and remind people of these simple truths: we’ve never had more people covered. We’ve never had lower sustained cost growth in health care … the share of Americans who can’t afford care that they need has fallen by more than a third. We need to make sure people hear these truths. 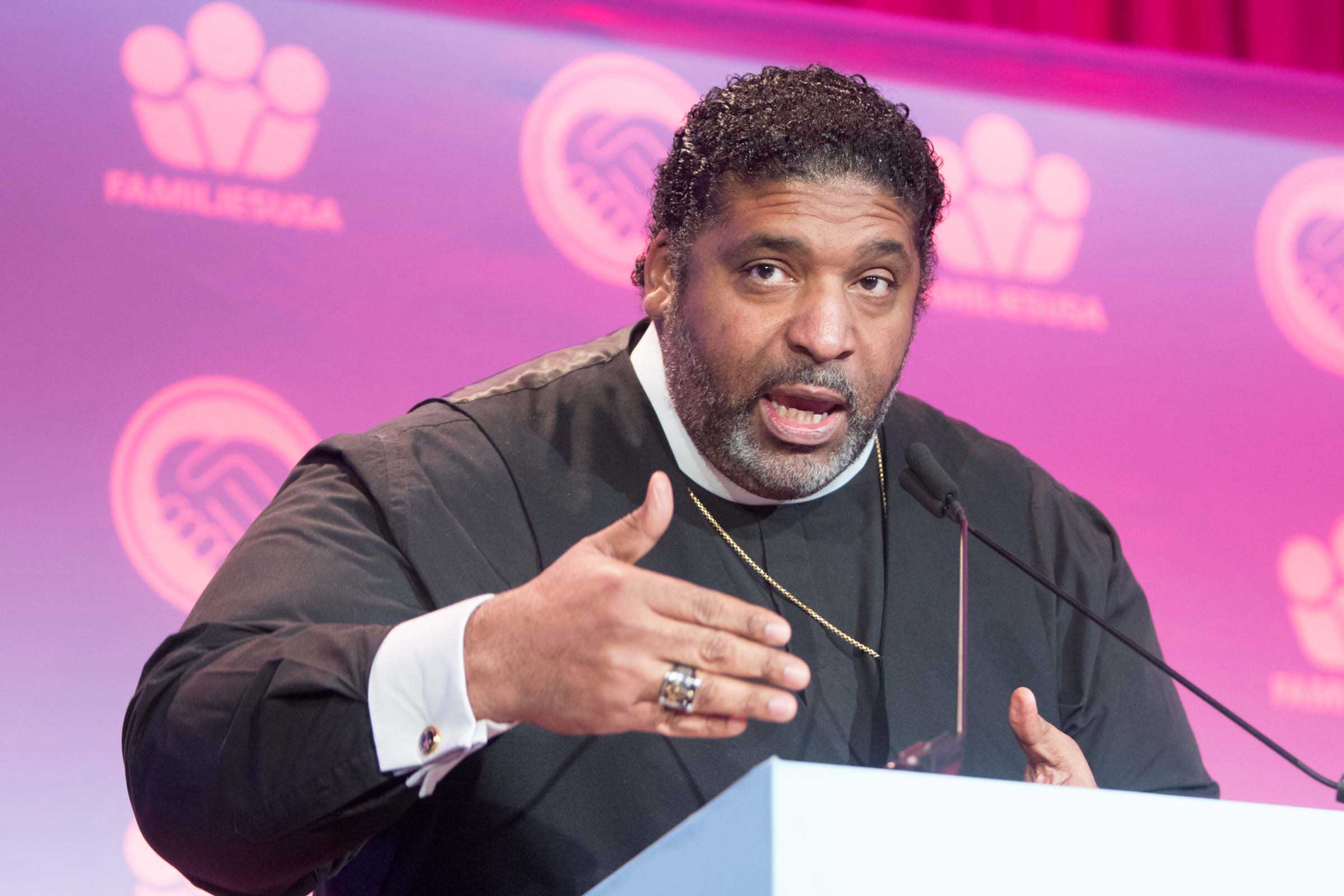 [/caption]Rev. William Barber, president of the North Carolina NAACP and leader of the Moral Mondays movement that helped unseat Republican North Carolina Governor Pat McCrory this past November, situated Trump in the rhythm of American history: advance of human rights followed by backlash.

He called on those committed to values of inclusion and economic justice to create a new language that seizes the high moral ground, proclaiming the immorality of denying access to healthcare and other necessities of life to the disenfranchised. 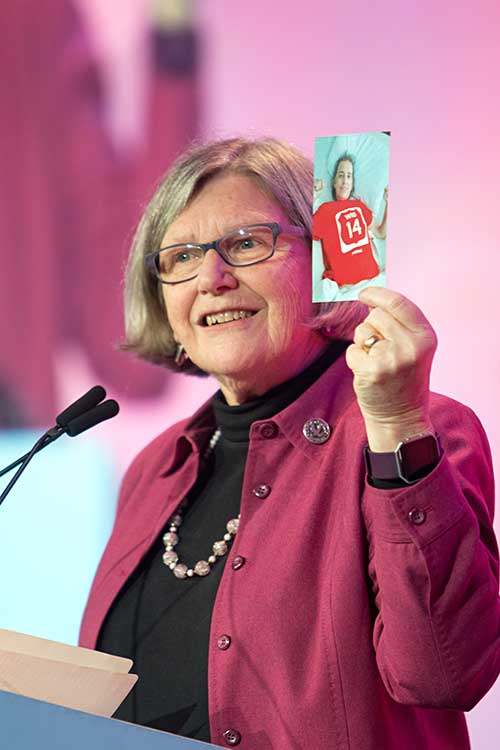 In the closing plenary, Sister Simone Campbell, executive director of the Catholic social justice organization NETWORK, who provided crucial support to the ACA as it approached a razor-close vote in the House in early 2010, said that the key to effective political action is to open one’s ears and hearts to people of all kinds, hear their stories, then tell those stories. “If we let hearts be broken open, real healing takes place” – and the power to open the hearts of others. She urged a “holy curiosity” for others’ stories, to be followed by “sacred gossip” – sharing those stories on a broader platform.

The alternating rhythm of close-in technique and wide-angle spiritual and historical perspective conveyed a sense, at least to me, of the private-sector institutional resilience that will be needed to outlast the power of Trump to demonize the disadvantaged, and of Republicans to disenfranchise and denude them of existing supports. It is true that institutional norms and know-how can be systematically destroyed when societies lend power to strongmen and oligarchs. But so far that has never happened in a society with as developed political, economic and social service institutions as the United States. 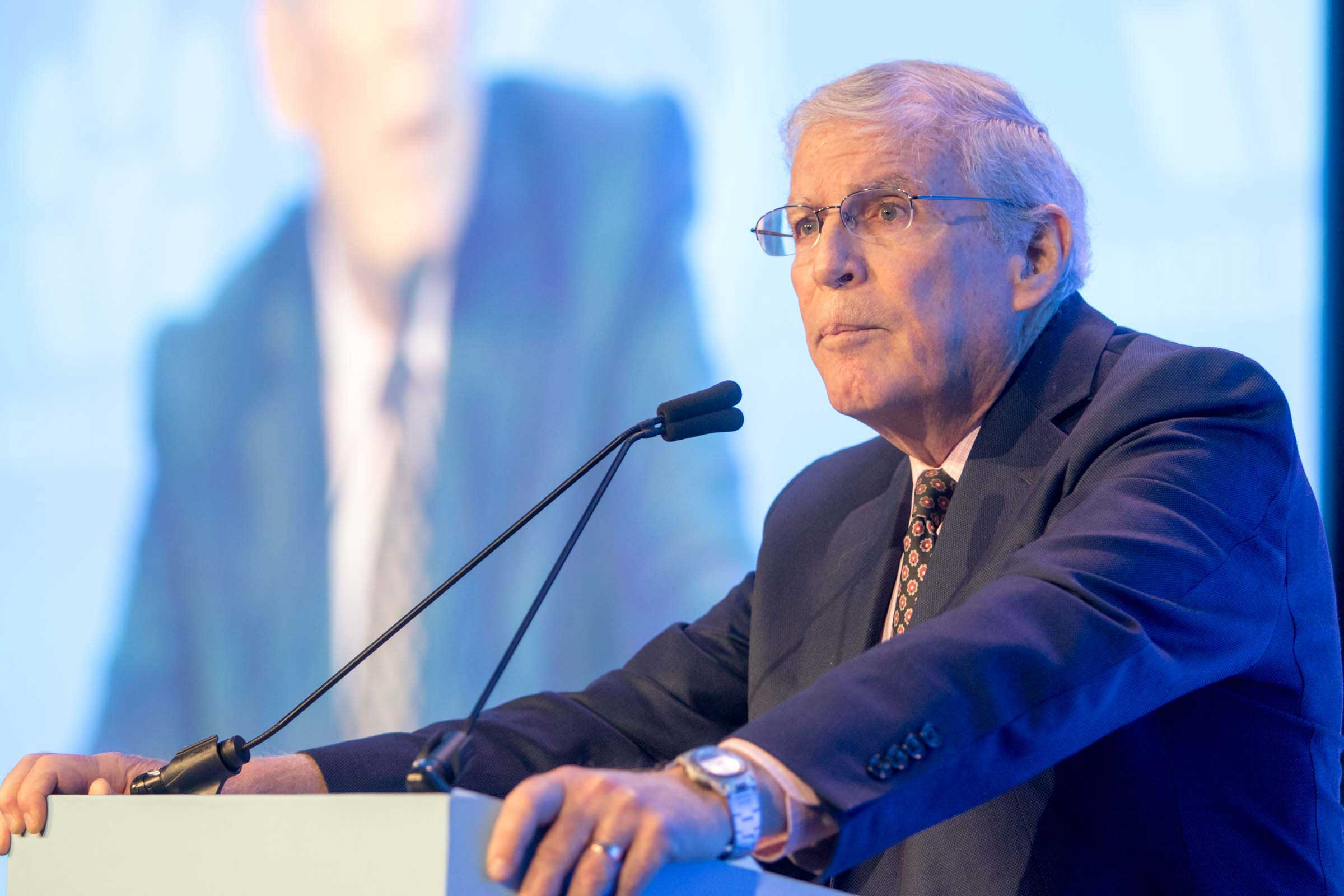 Lending poignancy to this collective assertion of resolve was the retirement of Ronald Pollack after 33 years at the helm of Families USA, and the passing of the torch to his successor Frederick Isasi, a director of the National Governors Association and former Senate aide who played a major role in drafting the ACA.

It’s been said by many, including Nancy Pelosi at this conference, that the ACA could not have passed without Pollack. Richard Kirsch, director Health Care for America Now (HCAN), the gigantic umbrella organization of progressive institutions that steered grassroots support for the ACA from 2007 through its passage in 2010, describes Pollack’s role in HCAN’s formation as follows in his 2012 book, Fighting for Our Health: The Epic Battle to Make Health Care a Right in the United States:

The strategy Pollack brought … had three components. One, Families would give grants to a number of health care consumer groups … in fifteen battleground presidential states to fund the release of a number of reports that highlighted why health reform was needed in that state. Second, he wanted to find common ground and build relationships among potential adversaries. Third, he hoped to form a coalition of major stakeholder groups that supported reform, each of which would make a substantial contribution to a joint effort. The Families USA Board agreed to commit $5 million to the venture, to demonstrate the seriousness of its commitment and attract other groups.

Pollack announced his retirement six months ago, and Health Action 2017 was doubtless planned as a glorious valedictory. It was that, but with a huge shadow of potential tragedy looming over accomplished (if very partial) triumph.

The warm regard between Pollack and dozens of current and former colleagues he interacted with on- and off-stage could not be faked. Writ small, it exemplified the sense of community that Families USA has worked long to foster in the country at large.