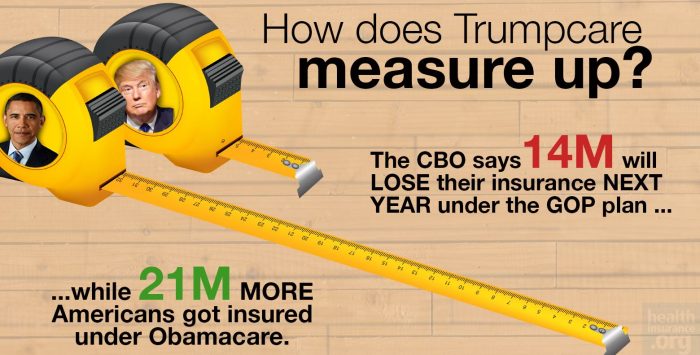 At long last, it’s here! Not since the King vs. Burwell Supreme Court decision has there been this much anticipation among healthcare wonks about an impending notice from a branch of the federal government. I’m referring, of course, to the Congressional Budget Office’s scoring of the so-called “American Health Care Act” (AHCA), otherwise known as “Trumpcare”.

Congressional Republicans and the Trump administration know they have a big dumpster fire on their hands, which is why they’ve spent the past week or so “pre-butting” the CBO score, primarily by trying to delegitimize the agency based on their not being 100% accurate about every past projection. Of course, this never stopped Trump or the GOP from heaping praise on the CBO whenever it gave them results they liked in the past.

Anyway, estimates from other sources about how many people would lose coverage if the Trumpcare bill passes and becomes law range from as “low” as 6-10 million people (according to S&P Global Ratings) to as high as 15 million (according to the Brookings Institute).

However, even these numbers pale in comparison to where the CBO thinks the Republican’s “replacement plan” would take us:

First, let’s get the “good” news out of the way: Yes, there would be some federal budget savings:

Other than that, however…holy crap:

Later, following additional changes to subsidies for insurance purchased in the non-group market and to the Medicaid program, the increase in the number of uninsured people relative to the number under current law would rise to 21 million in 2020 and then to 24 million in 2026. The reductions in insurance coverage between 2018 and 2026 would stem in large part from changes in Medicaid enrollment—because some states would discontinue their expansion of eligibility, some states that would have expanded eligibility in the future would choose not to do so, and per-enrollee spending in the program would be capped. In 2026, an estimated 52 million people would be uninsured, compared with 28 million who would lack insurance that year under current law.

Yes, that’s right: 24 million more people would be uninsured under Trumpcare than are today…more than reversing the 20-22 million net gain in Americans with healthcare coverage. Worse yet, a large chunk of those losing coverage would, of course, be the most vulnerable and least able to afford it: Those currently enrolled in Medicaid. Because of course.

The CBO is noting that the there’d be an initial wave of Medicaid expansion enrollees losing coverage the first few years…followed by a second wave being kicked to the curb via the “per-enrollee spending cap” policy, which is the long-term evil of this bill: As time goes on, the amount of money provided to states for their Medicaid programs would increase far more slowly than the cost of actually providing healthcare to the enrollees, meaning the states would have to eat a larger and larger slice of the pie…and would almost certainly start slashing coverage and/or reducing the number of people covered as a result.

How about that “Death Spiral?” Nope.

How about the individual market as a whole? You know, the whole “Death Spiral!” thing?

In CBO and JCT’s assessment, however, the non-group market would probably be stable in most areas under either current law or the legislation.

This is actually rather interesting. I expected them to call out “Death Spiral!” under Trumpcare…but the GOP has been insisting that the indy market is already in a Death Spiral, so this projection negates the “Death Panel!!” talking point from BOTH camps.

Under current law, most subsidized enrollees purchasing health insurance coverage in the non-group market are largely insulated from increases in premiums because their out-of-pocket payments for premiums are based on a percentage of their income; the government pays the difference. The subsidies to purchase coverage combined with the penalties paid by uninsured people stemming from the individual mandate are anticipated to cause sufficient demand for insurance by people with low health care expenditures for the market to be stable.

Under the legislation, in the agencies’ view, key factors bringing about market stability include subsidies to purchase insurance, which would maintain sufficient demand for insurance by people with low health care expenditures, and grants to states from the Patient and State Stability Fund, which would reduce the costs to insurers of people with high health care expenditures. Even though the new tax credits would be structured differently from the current subsidies and would generally be less generous for those receiving subsidies under current law, the other changes would, in the agencies’ view, lower average premiums enough to attract a sufficient number of relatively healthy people to stabilize the market.

In other words: Under the ACA, unsubsidized premiums are projected to keep increasing, of course…but the tax credits would be higher to match for most people. Under Trumpcare, the tax credits would be lower…but some of the gap would be made up by the $100 billion “stability fund”, which amounts to funding for programs like High Risk Pools, Reinsurance and so forth. CBO is basically calling the market stability factor a wash.

Of course, this assumes that those programs are actually funded properly and long-term, because lord knows state-run High Risk Pools have never been underfunded before (that’s sarcasm, by the way…they’re always underfunded).

Speaking of premiums, however:

It’s vitally important to keep “relative to projections under current law” in mind. The CBO is not saying that rates will increase 15-20% over the next two years; they’re saying that they’ll go up 15-20% beyond whatever they would under the ACA as it stands today.

Starting in 2020, the increase in average premiums from repealing the individual mandate penalties would be more than offset by the combination of several factors that would decrease those premiums: grants to states from the Patient and State Stability Fund (which CBO and JCT expect to largely be used by states to limit the costs to insurers of enrollees with very high claims); the elimination of the requirement for insurers to offer plans covering certain percentages of the cost of covered benefits; and a younger mix of enrollees. By 2026, average premiums for single policyholders in the non-group market under the legislation would be roughly 10 percent lower than under current law, CBO and JCT estimate.

In other words, let’s say you have a theoretical 2017 ACA exchange policy which costs $500/month this year and would be expected to increase, say, 5% per year for the next 9 years under the ACA. In that scenario, the premium increases would look like column two.

In other words, things would be worse for the first seven years…but slightly better after that. In theory. Assuming no other major changes happen over that period of time, that is.

On the surface, this may seem to be somewhat positive (if you’re willing to wait until 2024 for the relative savings to kick in)…but there’s also this, from page 16 of the CBO’s score:

Because of plans’ lower average actuarial values, CBO and JCT expect that individuals’ cost-sharing payments, including deductibles, in the non-group market would tend to be higher than those anticipated under current law. In addition, cost-sharing subsidies would be repealed in 2020, significantly increasing out-of-pocket costs for non-group insurance for many lower-income enrollees. The higher costs would make the plans less attractive than those available under current law to many potential enrollees, especially people who are eligible for the largest subsidies under current law.

Yes, that’s right: Even if deductibles/co-pays don’t officially go up any more than they’re already projected to under the ACA…there’d be no Cost Sharing Reduction program around to cut them down to size for those below the 250% federal poverty line, as there is today. Oh, and those 750,000 Basic Health Plan enrollees in New York and Minnesota can kiss their current coverage goodbye as well.

Older people will pay much more

Another crucial item to keep in mind is that the 15-20% higher / 10% lower projections are averages. Some folks would be better off, others worse off…and who might those groups be?

Although average premiums would increase prior to 2020 and decrease starting in 2020, CBO and JCT estimate that changes in premiums relative to those under current law would differ significantly for people of different ages because of a change in age-rating rules. Under the legislation, insurers would be allowed to generally charge five times more for older enrollees than younger ones rather than three times more as under current law, substantially reducing premiums for young adults and substantially raising premiums for older people.

Hoo, boy. I’m guessing the AARP isn’t gonna be happy about this at all. Remember, their premiums can be 5 times as  high as a young enrollee…but their tax credits would only be twice as high.

Oh, yeah…and they take a little dig at the GOP for ramming this through so quickly:

…because of the very short time available to prepare this cost estimate, quantifying and incorporating those macroeconomic effects have not been practicable. 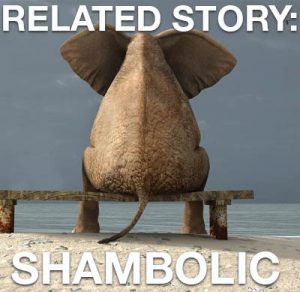 Perhaps the best way of illustrating just how harmful and pointless the “American Health Care Act” would be is this: For the past couple of months, I’ve been carefully compiling estimates about just how many people would lose coverage if the ACA was to be fully repealed (“root and branch”, as Mitch McConnell keeps saying), with immediate effect and no other legislation.

Guess how many people I estimated nationally?

In other words, according to the Congressional Budget Office, the Republican Party’s “replacement plan” for Obamacare is just as useless and cruel as repealing without any replacement whatsoever.