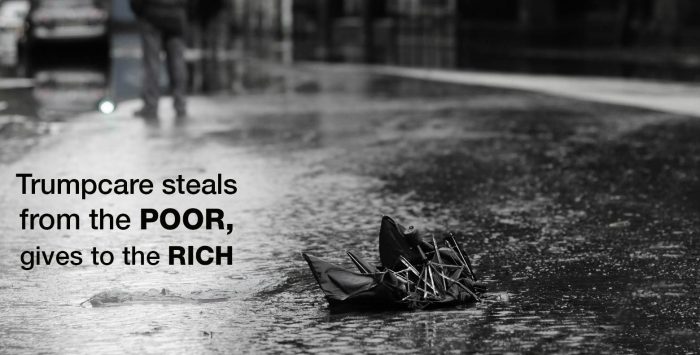 Under the ACA, my family doesn’t qualify for premium tax credits (premium subsidies), so we pay full price for the health insurance plan we bought in the Colorado exchange. Under the American Health Care Act (AHCA; summarized here) unveiled by House Republicans on March 6, we would be eligible for $9,500/year in tax credits.

No such thing as free lunch – or tax credits

And yet I wholeheartedly reject the AHCA. Those tax credits aren’t free; they come at the expense of low-income and older Americans. I want no part in pushing vulnerable populations into poverty and eliminating their access to affordable health care.

My family’s income is just a little bit too high to qualify for tax credits under the ACA. Which means we’re doing fine. We’re solidly middle class, although the 2011-model iPhone 4S my husband and I share probably couldn’t be traded in for much in the way of health care. We’ve never had to get food at the food bank, or worry that our kids will go hungry during the summer. We’ve never had to choose between paying the electricity bill or the water bill, but not both.

The ACA doesn’t directly help us, and that’s OK, because we weren’t the people who needed help in the first place. Our family has been indirectly helped by the ACA, in that our health insurance coverage no longer has lifetime or annual limits, and has a lower out-of-pocket exposure than our old plan. If one of us were to become seriously injured or ill, we’d be grateful for those improvements. But we’re not the people who really needed help in terms of health care reform. And therefore, the ACA didn’t channel resources towards helping us.

The AHCA would help us, but those new tax credits would be offset by much less help for people who actually do need financial assistance in order to afford health insurance and health care. A 60-year-old living in our hometown, earning $20,000/year, would go from getting nearly $10,000 in tax credits now, to just $4,000 under the AHCA. That doesn’t sit well with me, and if you picture your own low-income elderly neighbors, it probably doesn’t feel right to you either.

To add insult to injury, the lower tax credits for older people would be compounded by the fact that the AHCA would allow insurers to charge older enrollees five times as much as younger enrollees (under ACA rules, older applicants can only be charged three times as much). Their premiums would grow, and their tax credits would shrink. This explanation from this fellow and his friend, Charlie, is spot on. 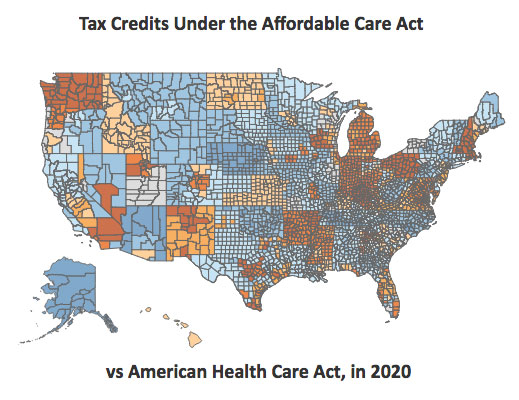 In contrast, the AHCA doesn’t anchor tax credits to the cost of insurance in a particular area, and it doesn’t tie them to your income unless you earn more than $75,000 as a single person, or $150,000 as a couple.

My family is well under that threshold, so we would qualify for the full tax credits. They’re slated to begin in 2020, but if they were in effect right now, we’d be getting $2,000 for each child, $2,500 for me, and $3,000 for my husband. That would cover nearly our entire premium for the full year on our current plan.

But what about the rest of the people who buy their health insurance in the individual market? This interactive map from the Kaiser Family Foundation is an excellent tool for at-a-glance comparisons of how people at different ages and income levels would fare under the new legislation.

The map turns blue when the tax credits would be higher under the AHCA, and yellow/orange when they’d be smaller. Play around with it for a bit, and you’ll notice that older, lower-income folks would almost universally see smaller tax credits. And the big winners will be higher income people: families like mine who will no doubt appreciate the help, but who might not like knowing that it’s been ripped away from people who much more desperately need it.

Don’t get me wrong, I would love to see additional premium assistance for people who are currently impacted by the ACA’s subsidy cliff. A family of four (adults who are 46 and 50, and two kids under 21) in Rock Springs, Wyoming earning $97,000/year currently pays $783/month for the second-lowest-cost silver plan in the exchange. If their income is $97,500 however, they’re no longer eligible for the ACA’s tax credit, and they’ll pay $1,815/month for the same plan.

It would be great to see that fixed, either with gradual phase-outs of the ACA’s tax credits, or with an extension of the tax credits up to maybe 600 percent of the poverty level (smaller subsidies would be needed to keep premiums at an affordable level for people with higher incomes, but the subsidies would alleviate the problems that we currently see in very high-cost areas of the country, like Alaska, where unsubsidized premiums are unaffordable for most people).

But I do not want to see tax credits extended on the higher end of the income scale at the expense of lower-income and older people. The problem with the AHCA isn’t that it helps higher-income folks. It’s that it simultaneously hurts lower-income people (and to be clear, the overall impact is a decrease in tax credits; a Kaiser Family Foundation analysis indicates that average tax credits would be 36 percent lower in 2020 under the AHCA).

The ACA’s tax credits shrink as income grows, and are larger in areas where health insurance is expensive – both of which are provisions that make sense if your goal is to make coverage affordable. The AHCA’s tax credits, on the other hand, shrink for very high-income earners, but they’re otherwise only adjusted for age. They’re the same size in areas with low-cost and high-cost health insurance, and they’re the same regardless of whether you earn $20,000 or $70,000.

That approach is disconnected with reality, and it’s going to result in a lot more uninsured Americans. Although Congressional Budget Office scoring for the AHCA is still a few days away, it’s expected that somewhere between 6 million and 15 million people would lose coverage if the law were to be enacted.