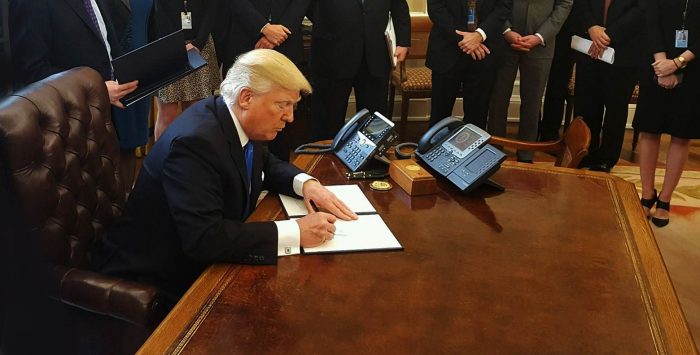 President Donald Trump: Photo from Office of the President of the United States

Congressional committees are in the midst of marking up the American Health Care Act (AHCA), introduced by House Republicans earlier this week. Although that legislation has taken center stage in the ongoing debate about the long term future of health care reform, the filing season for 2018 rates and plans is nearly upon us.

In a normal year, health insurance actuaries would have been busy crunching numbers throughout the winter, and would be putting the finishing touches on their rate and plan proposals for next year. But this is not a normal year, and actuaries have been dealing with considerably uncertainty in terms of regulations and market stability for 2018.

The individual health insurance markets have been teetering on the brink of collapse in some states, and insurers and consumer advocates called on the federal government to make changes to stabilize insurance markets. HHS has, in fact, proposed a variety of rule changes aimed at market stabilization for 2018.

But there have also been administrative changes and proposed legislation that could have the opposite effect. The overall strategy doesn’t appear to be coordinated in any one direction. The Trump Administration’s regulatory and judicial actions seem more like a hodge podge of shooting from the hip in an effort to appease various stakeholders.

Let’s take a look at what’s been proposed and what has changed:

The public was invited to submit comments on the proposed regulations before March 7. Those comments will be weighed along with expert opinions and new facts submitted during the comment period.

In an additional move that may help to stabilize insurance markets, CMS has pushed back the deadlines for insurers to file proposed rates and plans for 2018. The original letter to issuers in December 2016 scheduled the process to start on April 5, 2017, but a revised time frame, published in February, has pushed the start date for the filing window out to May 10.

The extension doesn’t solve any of the underlying problems, and the uncertainty surrounding the insurance markets could still wreak havoc with 2018 plans. But the later filing deadlines give insurers some breathing room while solutions are debated.

On February 21, House Republicans and the Trump Administration filed a joint motion asking for a continued delay in House v. Price (formerly House v. Burwell). The motion, which calls for quarterly status reports beginning May 22, is intended to delay the lawsuit until if and when legislative action is taken that renders the House v. Price case unnecessary.

In December 2016, after Trump won the presidential election and it became clear that the ACA would be a pivotal issue in the 2017 legislative session, House Republicans asked for a stay in the case, and it was granted.

The February 21 motion to further delay the case indicates that Republican leadership is clearly aware of the need to ensure that cost-sharing subsidies continue to be paid to insurers, in order to prevent upheaval in the insurance markets. Under the contract insurers have with CMS for 2017, insurers would be allowed to cancel coverage mid-year if the government stopped remitting cost-sharing subsidies to the insurers.

Millions of people abruptly losing their coverage would be politically untenable for Republicans, who have been forced to assume ownership of the health care reform process. GOP leaders want to repeal and replace the ACA, but they want to do it in an orderly fashion, via legislation. Now that they’re in control, they’re no longer interested in a lawsuit that would abruptly capsize the insurance markets.

Provisions that could destabilize the individual market

The new developments discussed above are all aimed at stabilizing the individual health insurance market, both on and off-exchange. It’s worth noting however, that some recent rule changes could have the opposite effect, as could the aforementioned AHCA.

The IRS had planned to start rejecting tax returns that didn’t answer the question about whether the filer had health insurance, but they reversed course and will continue to accept those returns. The individual mandate is among the least-popular provisions of the ACA. But without a strong mandate, the pool of insureds would be sicker, as healthy individuals would have less incentive to maintain coverage. By continuing to accept “silent” tax returns for 2016, the IRS is making the individual mandate slightly weaker than it would be if those returns were rejected.

And on February 23, the federal government issued yet another extension for grandmothered (transitional) health plans. There are 33 states that are still allowing grandmothered health plans to renew in 2017, and if they go along with the latest extension, those plans will be able to renew in 2018 as well, remaining in force through the end of 2018.

The people who have coverage under grandmothered plans bought their policies after the ACA was enacted (March 23, 2010), but before the end of 2013. Their medical histories were used to determine eligibility for coverage, which means they’re fairly healthy. Allowing grandmothered plans to renew again keeps that healthy group of people out of the ACA-compliant insurance pools, which are badly in need of healthy applicants to keep the risk pool balanced.

The AHCA would eliminate the individual mandate penalty for 2017, which means that if the bill were to be enacted (which is unlikely, given the current division among Republican lawmakers), healthy people might drop their coverage for the remainder of 2017. The ACHA would replace the individual mandate with an incentive to encourage continuous coverage:

Starting in 2019 (or 2018, if people enroll during a special enrollment period), insurers would be able to increase premiums by 30 percent if the applicant had been without coverage for more than 63 days. But for 2018 coverage, people would be able to enroll during open enrollment with standard rates, even if they dropped their 2017 plan mid-year.

If finalized, the market stabilization rules proposed by HHS would allow an insurer to require an applicant to pay past-due prior year premiums in that scenario, but people could get around that by selecting a plan from a different insurer during open enrollment. As such, the gap between the elimination of the individual mandate penalty and the implementation of the continuous coverage requirement could destabilize the individual market for 2018.