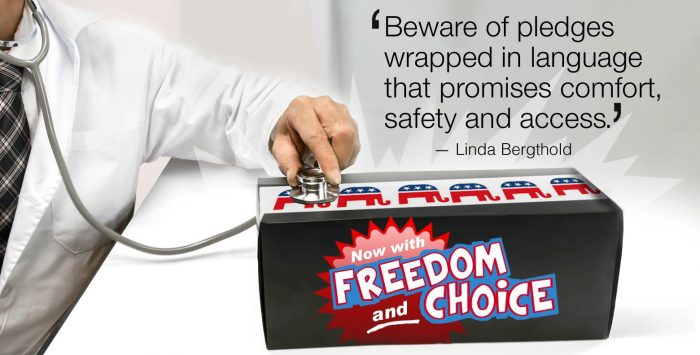 Words do matter. What we call things can heal, hurt, enrage, and yes – mislead. That last part is especially important to consumers who have been trying to make heads or tails of the Affordable Care Act and the ongoing effort to repeal and replace it.

Right now, Republicans are telling Americans that the health reform law is so flawed that it has to be replaced. While they haven’t reached consensus on a single plan, repealers are using a lot of the same talking points to explain how their replacement would be better than the ACA.

With so much at stake for millions who gained coverage thanks to the ACA, it’s critical that consumers not be misled by promises wrapped in language that may sound good but do not deliver on the promise. So here’s a helpful primer on how to sort through the rhetoric and the high-flown language of the Republican repeal-and-replace plans for the Affordable Care Act.

Most of the seven replacement plans being floated by the Republicans have names like The Patient Freedom Act or Patient Care Act or A Better Way. These plans are loaded with phrases such as “freedom,” “choice,” “patient-centered”and “access to care.”

And while Republicans make it sound like those are synonyms for something new, innovative and patient-friendly, the words actually describe ideas that are old and tired – the staples of Republican proposals over the past 20 years: high-deductible health plans (HDHPs), Health Savings Accounts (HSAs), tax credits, and medical liability reform, among others.

The first thing Republicans will tell you about any replacement plan is that you can choose what insurance plan you want to buy and what doctor will treat you. This freedom to choose only what you “need” (Republicans use the term “want”) is touted as freedom for you, but it’s actually liberation for the health insurance carriers who were required by the ACA to offer the same essential benefits to everyone.

Those vastly improved – and truly comprehensive – plans gave consumers freedom to choose options with costs that best fit their needs with the reassurance that they wouldn’t have to choose a bare-bones plan without maternity care or mental health/substance abuse benefits.

Republicans never get tired of telling consumers they should be excited about the prospect of being able to choose plans with high deductibles once those “burdensome” comprehensive plans are no longer required. After months of pointing out consumer complaints about the high deductibles in the ACA’s Silver plans, the very essence of Republican replacements are … you guessed it … high-deductible health plans!

These HDHPs are made possible by money consumers will stash away in Health Savings Accounts (HSAs). (Critic after critic has pointed out that if you’re middle-income – or low-income – you’re not going to have money lying around to fund these accounts.)

Republicans will also tell you that socking away that money in an HSA will make us all more careful consumers of healthcare and better health plan buyers. This might be true when when you shop for car insurance (which by the way is mandated in every state except New Hampshire), but then you have a pretty good idea of the worst that can happen to your car and how much it might cost to replace your car.

Healthcare is a different matter. Most people have no idea how much an average day in a hospital costs (between $1,000 and $3,000 minimum, varying by state and locality) or what the monthly costs of cancer drugs might be (about $10,000). Asking consumers to choose among disparate plans because it “gives them more responsibility for costs” simply means that the consumers will get hit with unexpected costs that aren’t covered by skimpy plans and insurers get to put less “skin in the game.”

Guess who wins again? The insurers who transfer more costs to you and pump up their own profits.

But what is this overwhelming concern for patients about? Certainly most of us don’t feel that our care is very patient-centered when we have long waits to see a doctor or have to hassle with an insurance company over coverage. The most positive spin of the Republican proposals is the suggestion that when a patient and her physician decide she needs a specific treatment, they won’t have to clear it with the insurer or the government.

There is much talk about the terrible “government interference” between the patient and the physician. However, having studied how insurance companies make coverage decisions, I can testify that no replacement plan is likely to interfere with the process of prior authorization or medical necessity determinations by an insurance company. The patient-centered care of tomorrow will not change the way insurers manage your care.

“Access to care” is probably the most misleading of all the terms being used to describe the Republican replacement plans. Instead of guaranteeing people that they will be covered regardless of pre-existing conditions – easily the most beloved provision delivered by the ACA – they try to get us excited about the replacement plans that offer “access” to care (aka insurance coverage) but do not guarantee it will be affordable (or even available in your area).

Republican replacement plans try to dazzle us with several different approaches to giving people access to insurance, but most require the member to have been enrolled previously for a defined number of months, or to enroll at a specific time.  If consumers miss that narrow window, they lose the access.

Access also means that yes, people will have less trouble finding plans that will accept them, but those plans may have very skimpy benefits, sky-high high deductibles or may simply be unaffordable. The “universal access” promise does not give anyone a guarantee of coverage.

Beware of pledges wrapped in language that promises comfort and safety and yes, access.

If you look closely at any of the proposals floated so far (and many policy experts have already done this) it’s evident that the result will be the opposite: bare-bones coverage that isn’t comforting … that doesn’t provide a real safety net … that covers only a fraction of the costs of coverage and a fraction of the population that desperately needed the freedom to choose from affordable, comprehensive coverage.