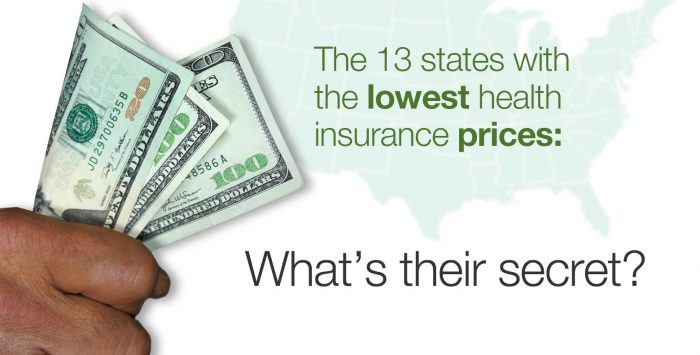 Rate changes in the individual health insurance market have been a hot topic lately. Nationwide, average premiums in the exchanges are increasing by about 12 percent for 2016, assuming nobody shops around. (People are shopping around, so the effective rate hike will certainly be lower).

But national averages don’t tell the whole story. Each state has its own regulations, demographics, provider-to-resident ratio, carrier saturation, and exchange structure – so we have 51 unique exchange markets.

And most of the commentary on 2016 rates has focused on how the rates are changing from 2015 to 2016. But again, that doesn’t give us the full picture.

For example, Arizona’s average exchange rates are increasing by 12.3 percent in 2016, while Indiana’s average exchange rates are only going up by 0.7 percent. Sounds like Indiana’s the winner, right? Except that the average benchmark premium (second lowest-cost Silver plan) for a 40-year-old in 2016 will be $207 in Phoenix and $298 in Indianapolis, because Arizona’s premium was much lower than Indiana’s in 2015.

With all of that in mind, I set out to see if there were common themes that could be seen among the exchanges with the lowest average benchmark premiums in 2016. The Kaiser Family Foundation (KFF) calculated average benchmark (second-lowest-cost Silver plan) premiums for a 40 year-old in a major metropolitan area in every state.

In the 13 least-expensive exchanges, the average is less than $250/month:

One drawback to the KFF data is that it’s localized to a major metropolitan area in each state. But Milliman data includes state-wide average benchmark premiums for 2016 in the 37 states that used HealthCare.gov in 2015. Seven of the 13 states from the KFF data used HealthCare.gov in 2015, and six of those seven are among the ten lowest-priced states in the Milliman data.

So while the Milliman data doesn’t include 14 state-based exchanges, and the KFF data is localized to metropolitan areas, the two studies appear to corroborate each other.

So what’s different about those 13 states?

When we look at average individual market premiums in 2013, before the bulk of the ACA’s reforms went into effect, 10 of those 13 states (all but DC, Minnesota, and Washington) had rates below the national average. So while it appears that their success is not entirely due to their level of ACA implementation, they have managed to maintain their lower-than-average rates throughout the transition to ACA-implementation.

That’s indicative of a well-regulated insurance market that pre-dates the ACA, a proactive approach to ACA implementation, and likely some population demographics that can’t really be controlled by regulators.

This includes factors like population density and the number of healthcare providers that are available in each area of the state. For example, in sparsely-populated states like Wyoming and Alaska (where rates are particularly high and were well above average even in 2013), carriers don’t have the sort of negotiating clout that they have in densely-populated areas, simply because there aren’t as many providers from which they can select to build their networks.

Exchange design may be a factor in keeping rates as low as possible. State-run exchanges can choose to function as an “active purchaser” or a “clearinghouse.”

Active-purchaser exchanges negotiate directly with the insurance carriers in order to get the best premiums, networks, and benefits for plans sold in the exchange. Clearinghouse exchanges set the criteria that plans must meet in order to be sold on the exchange, and all plans that meet that criteria are welcome to participate.

Of the 17 state-run exchanges, ten use the active-purchaser model and seven use the clearinghouse model.

If we consider all 17 state-run exchanges, the average 2016 benchmark premiums for a 40-year-old in the metro areas of the ten active-purchaser exchanges is $292/month. For the seven clearinghouse exchanges, it’s $243/month.

This is in line with what Health Affairs found when when they analyzed 2015 rates earlier this year: the clearinghouse model had the lowest average rates when compared with active purchaser exchanges and the federally run marketplace.

This makes sense when we consider the financial toll on hospitals in states that have not expanded Medicaid; their costs that must be paid by privately insured patients are higher than they would be if the state were using federal funds to expand Medicaid and reduce the amount of uncompensated care that the hospitals provide.

CO-OPs have certainly been in the news of late, as 12 of the 23 original CO-OPs will have closed by the end of 2015. And the future of the remaining 11 CO-OPs is uncertain. But it’s interesting to note the impact that CO-OP competition has on state-wide average premiums.

Of the 13 states where metropolitan-area benchmark premiums are the lowest for 2016, eight of them had CO-OPs in 2015. Four of those CO-OPs (Michigan, Arizona, Utah, and Kentucky) will close at the end of 2015, but they were operational when 2016 rates were filed last spring. It remains to be seen whether the competition created in the 13 states with CO-OPs in 2016 will have an impact on 2017 premiums.

The ACA allows states to combine their individual and small-group risk pools, but only Vermont, Massachusetts, and DC have done so (Massachusetts merged their risk pools as part of their 2006 healthcare reform).

When the risk pools are merged, the expectationis generally that individual rates will decline, while small-group rates will increase. But some states have determined that the increase in group premiums would be more than the decrease in individual premiums. Other states decided to revisit the question later, to postpone the short-term administrative costs and market disruption caused by combining risk pools.

In Washington DC, the average benchmark premium for a 40-year-old is $243 in 2016. In Boston it’s $264. But in Burlington, Vermont, it’s $468. (Vermont has the second-oldest average population in the country, and utilizes pure community rating for health insurance plans. As such, their premiums are well above average – including 2013 premiums as well as benchmark rates in 2015 and 2016; but for older enrollees, premiums in Vermont are lower than they are in other states.)

Increasing the size of the risk pool by combining the individual and small group markets would tend to have a long-term stabilizing effect on individual market premiums, but the current sample size is too small to be particularly useful. And the fact that one of the three markets – Vermont – also uses community rating and has an older-than-average population, makes it harder to draw conclusions about rates based on combined risk pools.

But it is worth noting that for those three markets, the overall average rate increase for 2016 ranges from 4.3 percent to 6.3 percent – far lower than the national average of almost 12 percent, and indicative of a more stable market.

So which exchanges are the most expensive?

If we go back to the KFF data for a 40-year-old in each state’s major metropolitan area, just six exchanges have a benchmark premium over $350/month:

Again, that only represents a single metropolitan area in each state. But four of those states use HealthCare.gov, and when we check the Milliman data, three of those four states (Alaska, Wyoming, and North Carolina) have among the five most expensive average benchmark plans for HealthCare.gov states.

What can states do to lower their rates?

At this point, some of this is water under the bridge. It’s unlikely that states would be able to afford to switch to running their own exchanges now that federal funding to establish them is no longer available (although Kentucky’s Governor-elect Matt Bevin might want to reconsider his plan to decommission Kynect and switch to HealthCare.gov).

And there are certainly not going to be any new CO-OPs added to the health insurance market anytime soon; just keeping the 11 that remain will be a challenge.

But Medicaid expansion should be pursued by states that haven’t done so yet. Combined risk pools should also be carefully considered, although establishing them could be an expensive endeavor and might not yield dramatic results in all states.

For state-run exchanges that currently operate with an active-purchaser model, it may be worth considering the clearinghouse model instead. And for states that use the federally run exchange, there’s at least correlational evidence that some degree of involvement in the exchange is linked to lower prices, even if HHS continues to do the heavy lifting.