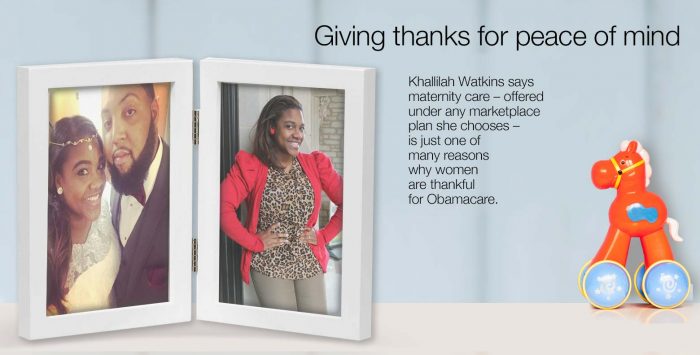 And while the 25-year-old Maryland resident works toward her ultimate dream – a job at NPR – she has health insurance at no cost thanks to Obamacare.

“I was between jobs and knew I was getting married, so I needed something to cover me until I decide whether or not to go on my husband’s plan,” says Watkins, whose internship is unpaid. “Because I had no income, I qualified for Maryland’s Medicaid expansion program.”

She knows that once she gets a job, she’ll no longer qualify for Medicaid expansion, which is part of the Affordable Care Act (ACA). If she doesn’t get insurance through work, she’ll figure out what’s most cost-effective: switching to an insurance plan through the marketplace or having her husband add her to his plan at work.

In the meantime, Watkins is thankful to have coverage for all the essential services she needs. While she was uninsured, she looked into having a routine Pap test – which checks for cervical cancer – and it would have cost her $280. Under Obamacare, it’s a no-cost preventive screening that comes with every insurance plan. She’ll also save on birth control. Instead of costing $20 a month, her prescription for oral contraceptives, or any other birth control method she chooses, will be covered with no co-pay.

Plus, Watkins is thinking ahead, so she appreciates knowing that services like maternity care are covered under any plan she chooses.

“I look forward to starting a family and it’s important to have the ACA and other laws in place for women to decide what’s best for them in any situation,” she says.

It’s not just women’s services Watkins cares about, though. Obamacare offers peace of mind she didn’t have before – even when she was covered through an employer plan. Three years ago, she was in a car accident so serious that she’s still in pain every day. Because her coverage at the time had a limit on the benefits it would provide, Watkins is now paying off $10,000 in debt from fees she had to pay out-of-pocket for her physical therapy, imaging tests and other aspects of treatment and rehabilitation.

With an Obamacare-compliant plan, there are no maximum coverage limits. And even with her chronic pain, Watkins has an optimistic mindset: “I’m grateful to be alive,” she says.

Better coverage for women (and men)

There’s a lot for women to love about Obamacare. It guarantees coverage for essential preventive services that can help people stay healthy, like annual check-ups and cancer screenings, and for services such as mental health care and maternity care.

Because Obamacare says that insurance companies can’t turn people away or cut them off because of a pre-existing or newly diagnosed condition, it also means women can’t be denied coverage if they’re pregnant or be forced to pay a higher premium just because they’re women, says Ebonee Rice, national young American and women’s engagement director at Enroll America.

These are all vitally important provisions for women, who could be denied coverage or charged more before the ACA. But the biggest change in women’s health under the ACA is birth control access, says Danielle Terry, RN, BSN, MPH, director of patient services, Central and East Region, for Planned Parenthood Mid and South Michigan.

“The birth control options for women have really expanded because insurers have to provide coverage for any method, with no co-pay,” Terry says. “A lot more women are choosing long-acting reversible contraceptives like the IUD because they no longer have to pay hundreds of dollars for them.”

Preventing unintended pregnancies isn’t just about waiting until the time is right to have children.

“When women can space out their pregnancies,” Terry says, “it’s better for them and for their children because it reduces infant mortality when you’re not having babies back to back.”

Because Planned Parenthood provides a full range of women’s health services, they offer Pap tests, sexually transmitted disease (STD) testing, pelvic exams and clinical breast exams that should be part of every woman’s routine care, wherever they see a doctor.

“Preventive services allow you to catch things earlier, which means a higher likelihood of surviving,” Rice says, “or maybe not even developing something at all.”

Although organizations like Planned Parenthood serve women with health insurance, including Medicaid, they remain a resource for women who are uninsured or underinsured.

Although the uninsured rate is dropping thanks to the ACA, some people still fall through the cracks. One reason is because people don’t realize how affordable health insurance can be now. More than 7 in 10 Americans can find coverage for $75 a month or less at HealthCare.gov with the help of tax credits.

Educating women on insurance affordability is particularly important given that women make 80 percent of the health decisions for their families, according to Rice and research conducted by Enroll America. “Women are the gatekeepers,” she says.

“Getting covered – and having your whole family covered – is so important,” Terry adds. “Being able to see a doctor in the office instead of having to go to the ER is good for women and their families.”

Open enrollment runs until January 31st, 2016, but you have to buy or renew your plan by December 15th to be covered starting January 1, 2016.

Special thanks to Enroll America, who brought Watkins’ story to our attention. We’d love to hear your Obamacare success stories and invite you to send them to us.