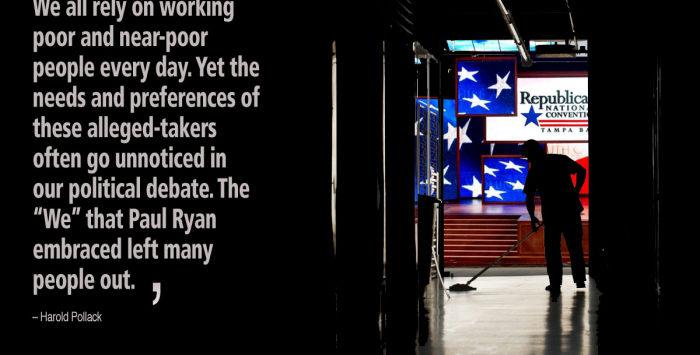 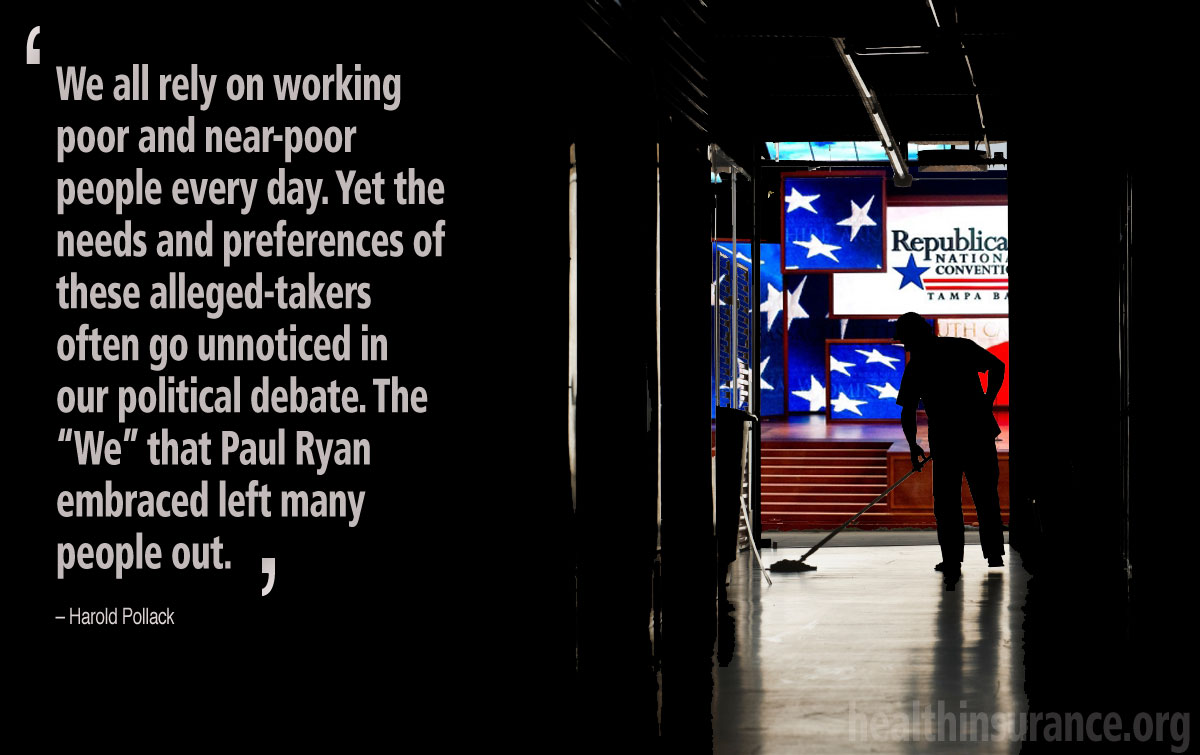 I’m still obsessed with an issue I’ve noted before.

Barack Obama, Paul Ryan, Joe Biden, Harold Pollack, and Mitt Romney have one thing in common. All five of us are likely to end this life with some of our most important needs addressed by a low-wage worker who will change our bedpans, and perform other intimate daily tasks. I’m not trying to be morbid. I’m just stating an obvious fact.

Maybe this direct care worker will be a single Chicago mom with a sick kid. Maybe she will be an immigrant from Mexico or the Philippines. She earns less in a year than Barack Obama earns in a few weeks. Mitt Romney probably matches her annual income every few hours. The Huffington Post had a nice story about other group of low-wage workers who cleaned up after the Republican National Convention in Tampa, Florida. These men and women make about $7.67 per hour. But they have to pay for their uniforms, too.

These are the people who often go uninsured, and who health reform was designed to help. After 2014, their low incomes will qualify them for Medicaid under the Affordable Care Act – except that Florida Governor Rick Scott has pledged to turn down billions of federal dollars made available to expand Medicaid under health reform.

The Republican platform calls Medicaid “the next frontier of welfare reform” – language one would never dare deploy regarding Medicare, though Medicare provides a much larger actuarial cash subsidy to the typical senior than traditional welfare does to the typical low-income single mom. These low-wage workers are the very population that heavily relies on programs such as Food Stamps, the Earned Income Tax Credit, and Medicaid which Republicans pledge to cut.

Representative Ryan would cut these programs to save money. He has other reasons, too. As he put things last year:

We’re coming close to a tipping point in America where we might have a net majority of takers versus makers in society and that could become very dangerous if it sets in as a permanent condition. Because what we will end up doing is we will convert our safety net system – which is necessary I believe to help people who can’t themselves, to help people who are down on their luck get back onto their feet – into a hammock that ends up lulling people into lives of dependency and complacency which drains them of their incentive and the will to make the most of their lives.

Ryan’s convention speech last week criticized President Obama for enacting “a new entitlement we didn’t even ask for.” Jon Chait rightly excoriated Ryan for this remark, though he ironically praised Ryan’s honesty, too:

[Ryan] dismissed the goal of providing health insurance to those who can’t afford it as something “we didn’t even ask for.” Who is “we”? We is the majority of Americans who do have health insurance. We outnumber the 50 million who don’t. They can go screw themselves.

We all rely on working poor and near-poor people every day. Yet the needs and preferences of these alleged-takers often go unnoticed in our political debate. The “We” that Paul Ryan embraced left many people out.

The delegates may not have noticed, but this speech left out dozens of people at the back of the convention hall. These men and women spent day and night being ignored in empty speeches as they emptied trash cans, recycled campaign litter, and cleaned up whatever chewing gum, half-eaten hot dogs, and spilled soda that feted GOP delegates mindlessly left behind.

From cradle to grave, we’re both makers and takers in this life. If some of my own rather comfortable income is taxed to provide health care or a meal for a janitor, farm worker, or nurse’s aide, that’s how it should be. These people aren’t “takers.” They are contributing, as I am, to our common life.

I heard much at the Republican convention about incentives, the glorification of “job creators,” and the fear of overly generous provision to people who are poor. As Democrats begin their own convention in Charlotte, I hope that we hear much more about the value of community and the dignity of work. Especially in this Labor Day season, the women and men who will clean my final soiled bed sheets deserve at least that much.