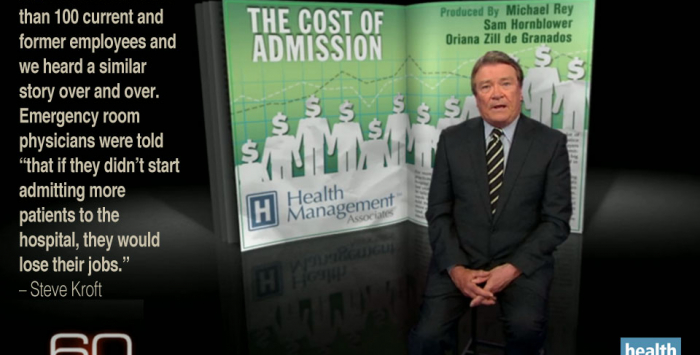 Sunday, CBS’ Sixty Minutes took a close look at Health Management Associates (HMA), a for-profit hospital chain that, according to its employees, has “relentlessly pressured its doctors to admit more and more patients – regardless of medical need-in order to raise revenues.”

“We talked to more than 100 current and former employees and we heard a similar story over and over,” CBS correspondent Steve Kroft reported. Emergency room physicians were told “that if they didn’t start admitting more patients to the hospital, they would lose their jobs.” The orders came from the top:

With 71 hospitals in 15 states, HMA is the fourth-largest for-profit chain in the country. Last year, it raked in revenues of nearly $5.8 billion; half of that came from Medicare and Medicaid. In other words, taxpayers were footing the bill for a large share of those unnecessary hospitalizations.

Patients also paid. As one doctor observed: “If you are put into the hospital for reasons other than a good, justifiable medical reason, it puts you at significant risk for hospital-acquired infections and what we would refer to as ‘medical misadventure'” (i.e. preventable medical errors).

The piece was shocking. But it is not a new story. It is an old story. To be more precise, it is a never-ending story. In Money-Driven Medicine: The Real Reason HealthCare Costs So Much, I profiled several for-profit hospital companies that did just what Health Management Associates has done: “put heads on beds” even though the patient didn’t need to be hospitalized.

At Tenet, in Redding, California, patients weren’t just hospitalized, they underwent heart surgery. An investigation would reveal that in many cases, they “had no serious cardiac problems whatsoever.”

An FBI affidavit estimated that in one-quarter of all cases, Tenet’s two “rainmaker” heart surgeons were slicing open patients who should never have been on an operating table. Other doctors tried to alert the hospital’s administration. They were ignored.

Some of those patients did not survive. Others were crippled. All suffered psychological trauma.

In 1997, Health Corporation of America (HCA) made headlines when FBI agents swarmed HCA offices in five states, and found evidence that at HCA, executive salaries hinged on meeting financial targets such as “growth in admissions and surgery cases.”

The FBI also discovered that HCA had been keeping two sets of books – one to show to Medicare, a second that contained the real numbers. Ultimately, the investigation would reveal that the hospital chain had been bilking Medicare while simultaneously paying kickbacks to physicians who steered patients to its hospitals.

Just as at HMA, whistleblowers said that the directives came from the top. Rick Scott, who would later become governor of Florida, was the CEO of HCA.

In 2000, HCA finally settled with the government, pleading guilty to no fewer than 14 felonies – the biggest case of Medicare fraud ever. The company paid $1.7 billion in fines.

No one went to jail – probably because the Frist family (as in Senate Majority Leader Bill Frist) had founded the hospital and hired Scott to run it. (Some would say he was hired to do their dirty work.)

HCA settled with the government shortly before the Senator’s brother, Dr. Tommy Frist, (who served as HCA’s chairman) was scheduled to be deposed by the government’s attorneys.

Rick Scott was never indicted, and waltzed away with $10 million in severance. In 2009, when he led a committee to kill health reform, I told his story on HealthBeat, and wrote about him again when he became Florida’s governor.

Tenet, HCA and HMA are just three examples of corrupt for-profit hospitals. After defrauding Medicare and hurting patients for years, these chains are caught, and pay a huge fine. No one goes to prison. Frequently they change the name of the chain, paint the front door, hire executives who are cronies of the former management team, and start all over again.

Update: Sure enough, HMA CEO Gary Newsome has announced that he will be retiring July 1. Newsome, 55, said in a news release that he is stepping down after being “called by the First Presidency of the Church of Jesus Christ of Latter-day Saints to serve as the president of its Uruguay-Montevideo mission.” (It appears that he’s getting out of Dodge.)

Newsome, who has been at the helm of the company since September 2008, took home $8.3 million in total compensation last year.

Meanwhile, the word on Wall Street is that HMA is now a takeover target. Bloomberg reports that, according to financial analysts, Community Health Systems (CHS), a sister for profit hospital chain is the most likely suitor.

HMA and CHS have quite a lot in common: CHS has disclosed that it, too, has received requests for information from numerous law-enforcement agencies regarding its admissions policies, some of which are based at least in part on whistle-blower allegations. Unfazed by charges of wrong-doing, shareholders have sent HMA’s share price soaring, up 25% in a week. ( Typically, takeover rumors spur buying.)

Why do they do it?

The hospital industry is a tough business, and it’s not easy to make the fat profits Wall Street expects. This is why the whole idea of trying to make hospitals “for-profit” is a truly terrible idea. Too often, shareholders’ interests trump patients’ interests.

More importantly, the hospital business is a labor-intensive, capital-intensive business. It just about impossible to reap the returns investors demand – unless you become creative.

This is not to say that for-profits have a monopoly on fraud. A few years ago, a whistle-blowing doctor at a non-profit Catholic hospital contacted me. The administration at his hospital was pressuring doctors to admit ER patients. The hospital ultimately closed down his practice, transferring his patients to other doctors at the hospital. But he didn’t back down.

Unfortunately, no one at the hospital would talk to me. And none of the doctors’ colleagues would talk on the record – though they had all heard the CEO tell staff they were going to have to hike admissions from the ER.

His partner did talk to me and corroborated the story, but wouldn’t talk on the record. It is so sad; people are so afraid.

I was seriously disappointed. This had all the elements of a great story: The Catholic Church! Nuns! Blood! Money! A guy who is willing to stand up!

I will always remember this physician. He was in his early 60s, and devastated when they closed his practice and he lost so many long-time, patients. Many of them were older, and he told me he kept a notepad by his bed, in case, during the night, he thought of something that he should check on regarding one of his patients.

After he lost his practice, his girlfriend left him.