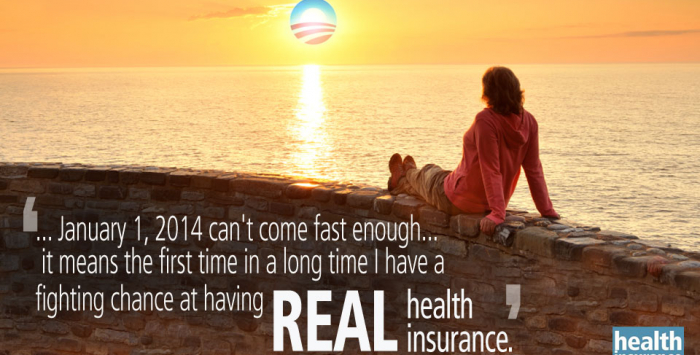 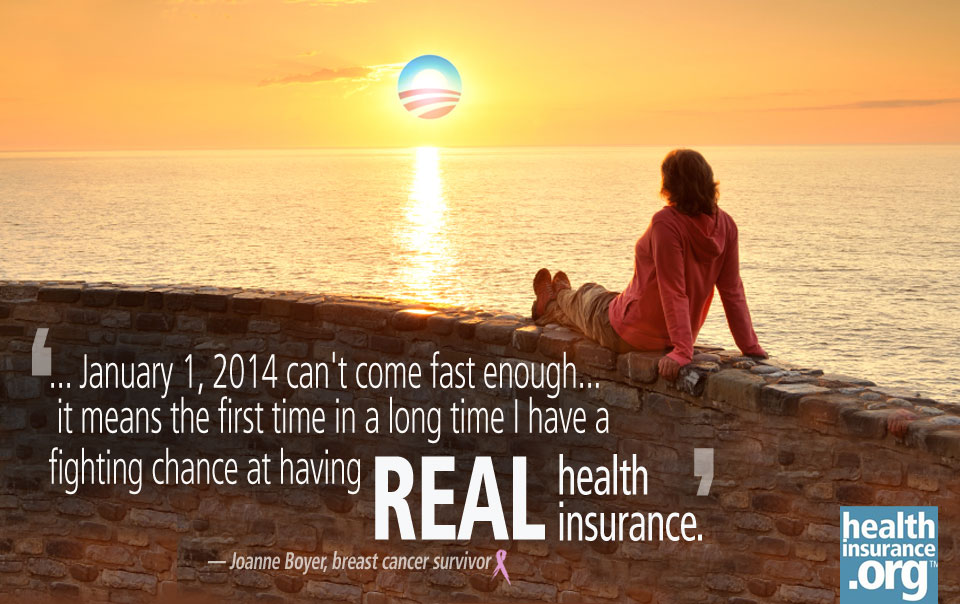 “As someone with a pre-existing condition, languishing in a high-risk insurance pool, January 1, 2014 can’t come fast enough. That’s the day for full implementation of the Affordable Care Act (ACA), and for me it means the first time in a long time I have a fighting chance at having “real” health insurance coverage.” – Joanne Boyer, breast cancer survivor

As someone with a pre-existing condition, languishing in a high-risk insurance pool, January 1, 2014 can’t come fast enough.

That’s the day for full implementation of the Affordable Care Act (ACA), and for me it means the first time in a long time I have a fighting chance at having “real” health insurance coverage. For you see, the “health insurance” card I currently carry is really nothing more than bankruptcy insurance.

How did someone like me – the entrepreneur living the American dream of running her own business and being her own boss – get stuck with bankruptcy insurance from a high-risk pool? Easy. I had the misfortune of being diagnosed with breast cancer four years ago.

Being self-employed for the last 12 years meant I did not have group health benefits though an employer (the idea again that somehow my health care depended on working for someone is logical how?). I had dutifully paid for a private policy for 10 years. But when the dust cleared from the initial breast cancer treatments in 2009 (I chose no chemo therapy and no recommended five-year drug therapy), the insurance premiums I had on the private policy increased 20 percent. The following year, another 20 percent premium increase. When the monthly premium hit $709 for a $5,000 deductible in September 2011, I cried uncle.

“Honey. No one’s going to insure you.”

I was approaching 60 years of age; I had exhausted my savings to pay for a private health insurance policy that was no longer financially sustainable; and I had a pre-existing condition. So where did that leave me? Pretty much with only one option – bankruptcy insurance, aka, the Minnesota Comprehensive Health Association (MCHA), Minnesota’s high-risk pool. I still remember the insurance broker I called to help me sort through the options I already knew didn’t exist. She cringed and said, “Honey. No one’s going to insure you.” And she was right. So after being turned down by all the for-profit insurers in Minnesota, my only option was a high-risk pool and continued prayers that my health would hold up.

I have six more months of automatic deductions of $329.21 from my checkbook for a health insurance policy that carries a $10,000 deductible. Who in their right mind would call that health care coverage? Any trip to any doctor for any condition requires I pay the first $10,000. Who has that kind of “disposable income?” I can barely make it from paycheck to paycheck in these increasingly tough economic times.

As this last month’s deduction hit I wondered again: The chance for real affordable health care is so close; the Minnesota Health Exchange will be up and running for consumer selection by October. My health is holding up … should I just stop paying $329.21 a month for a policy that ultimately I can’t use? Do I take the gamble?

I don’t have health insurance. I have bankruptcy insurance.

Then it hit me again. I don’t have health insurance. I have bankruptcy insurance. The only reason I keep this policy is for fear that something else may hit – an unexpected illness or accident. This high-risk pool policy with a $10,000 deductible is all that stands between bankruptcy and me if that were to happen.

Six months more of automatic deductions and each month I will continue to ask myself: Why do I live in the only industrialized nation in the world that somehow thinks the insanity of for-profit insurance companies equates to health care coverage for its citizens? Why can’t there be a single-payer system? Medicare for all. Everybody In – Nobody Out. Call it what you want. The rest of the industrialized world calls it health care at a far more reasonable price than what we have here in the United States.

But for now I’m salivating at my bridge to Medicare – the ACA. And yet I hear that politicians are once again trying to repeal the ACA … trying to make a 2014 political campaign issue out of the first real Band-aid to our intolerable health care delivery system in this country. I always wonder: Who are these people and don’t they know how many Americans are literally dying as we await the implementation of this baby step toward a real health care delivery system that works for people and not million-dollar CEOs of for-profit health care systems?

How many of these people are “good Christians?” Did they never hear, “When Lord, did we see you sick?” And as for UnitedHealth Group CEO Stephen Hemsley’s recent comments about his for-profit company deciding to stay out of the exchanges in many states because people will have a “pent up appetite” for medical care, I have only one response: Youbetcha Steve – we sure do. A basic human right that you deny us as you bank your 2012 $34 million total compensation package.

Here in Minnesota, we have a fighting chance of implementing a health exchange that may actually serve the average person like me, struggling to find health care coverage. We are the people literally counting down the days to the exchanges going “live” and our chance to participate in health care in this country.