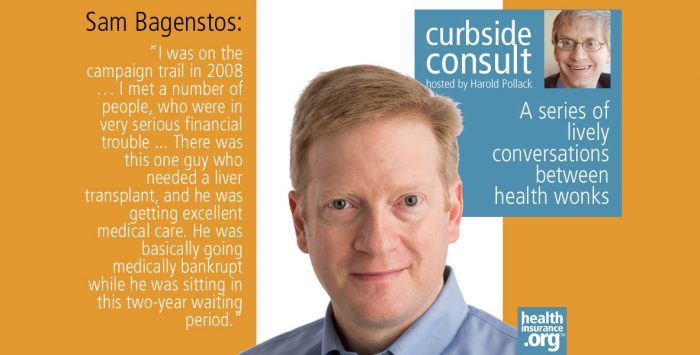 What This American Life missed about disability

Harold:
I’m ambivalent about that, because SSDI is so critical for people. It seems to me that recently we’ve seen some pretty stereotypical attacks on the growth of this program, which basically implies that people are getting on the program who shouldn’t be on it.

I don’t know if you saw the “This American Life” episode about disability, but I thought that presented a rather unfair picture of the growth in this program. At the same time, there are some real problems with the program that we have to address. What did you think of that program?

Sam: In some ways there was some nuance there that didn’t really come across very well. The overall picture of the This American Life episode that was basically: “SSDI and SSI are the new welfare. They are the ways in which people can avoid doing work that they really should be doing to earn their way in life.” That’s not a fair picture.

Certainly, we do have an increase in SSDI and SSI use, in part we would expect that in a recession. It always goes up in recessions, so you would expect that. In part, it’s about demography. You have Baby Boomers getting to the point where they’ve paid into the SSDI system.

SSDI is contributory social insurance. It’s like the rest of Social Security. They’ve paid into the SSDI system. They’re getting close to retirement age, and that’s the age when people tend to get work-related disabilities in higher numbers. You have a really large wave of women in the workforce in the ’70s and ’80s reaching that age. It wouldn’t be surprising that you’d see those numbers tick up, and there was something very alarmist about that program.

You hear these anecdotes about people trying to get their kids not to do well in school, so they could get SSI checks. Not doing well in school is not something that’s going to get you an SSI check. There was a very serious disability determination process for all these.

Harold: The child SSI part was especially misleading. I spoke with Chana Joffe-Walt. I like her. I think she’s a good reporter. I think she misunderstood things. If you look at the decline of kids on traditional welfare … that decline has been so much greater than the uptick in kids on SSI. Most of the kids who’ve tried to get on SSI for these controversial behavioral or mental health diagnoses are rejected.

The real problem we’re having right now is massive recession. We have all these really low-income single moms with kids who are not eligible. They’re eligible for some food stamps, but that’s about it. Some of these people are driven into the SSI system, who before would have been in some other program.The idea that people have basically been shifted over from welfare to SSI, the numbers aren’t even close to make that argument.

Now there is this growth in the SSDI caseload for people with mental health problems, and for muscular-skeletal issues. These conditions are more diverse. They’re more subjective than some of the other diagnoses. There are parts of the country, like Appalachia, where there’s been a pretty dramatic growth, which obviously is related in part to the death of employment in some of the blue-collar industries there.

Should we be tweaking the program in some way, to respond to this uptick in the roles?

Sam: The program should be reformed, and people have been saying this for a long time, in a couple of ways. Number one, it is really hard to get off the rolls once you’re on. In order to establish that you are eligible for SSDI, you have to show you’re really unable to work. Which means people end up sitting out of the workforce. [So people can] develop a psychological investment in the idea that they’re unable to work. Some of it is when you have significant gaps from the workforce in an economy like this one, it’s really hard to get back in. Of course, people who work at any point during their determination process are likely to have trouble getting SSDI.

SSDI doesn’t come into play until people have significantly separated themselves from the workforce, and early intervention is an approach that ought to be taken. There are a lot of proposals about how they do that. One approach is to provide some sort of partial disability paid for by the state. At the same time people could be given rehabilitation to stay on the job so that they don’t have these gaps. That’s also the point of the experience-rating of disability claims, to give employers the incentive to keep people on the job who acquired disabilities. That’s also a possibility.

Interventions that focus on the time before people get on the SSDI rolls is crucial. There have been a number of efforts to provide incentives to people who are already on the rolls, those are important, but I think those have borne limited fruit.