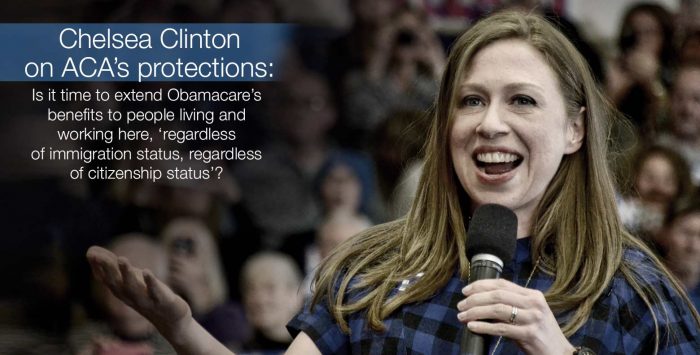 Six years ago yesterday, I was squeezed way in the back of the East Room, watching President Obama sign the Affordable Care Act into law. It was the ride of a lifetime. I had knocked on hundreds of doors, written dozens of memos, columns, and blog posts. Squinting way in the back, I couldn’t quite believe health reform was finally going to happen. By now, 20 million fewer Americans are uninsured because of ACA.

Yet one important group has largely been left out: Eleven million unauthorized residents of the United States, including several million who remain uninsured. Coverage for undocumented immigrants had been a touchy issue since day one of the health reform debate. Before there were death panels, there were the political operatives arguing that health reform was going to cut benefits to seniors so the government could provide free care to undocumented immigrants.

Covering illegals adds dramatically to the cost of any program – and would encourage more folks to enter America illicitly.

Obama’s plan will likely have a horrific effect on some local health-care systems.

But now they’d be eligible for the entire range of medical services, all free of charge. That would trigger severe rationing: bureaucrats deciding who gets to see an oncologist, who can have an MRI – and even who can have bypass surgery and who’d die for lack of it.

These decisions would be made not on the basis of legal status but on the brutal facts of triage: Treat the 37-year-old illegal with his whole life to live before you spend scarce resources on an overweight, diabetic, 80-year-old citizen with high blood pressure who smokes.

Morris and McGann – and their editors – overlooked one little thing: Barack Obama (along with Hillary Clinton and John Edwards) specifically excluded undocumented immigrants from his health reform plan. This was no secret. Democratic candidates debated the issue on national television.

The ACA specifically excluded the undocumented. It did provide additional funds to Federally Qualified Health Centers that often care for immigrants. Yet undocumented immigrants were excluded from the Medicaid expansion and from participating in state health insurance marketplaces.

I and other health reform advocates were quick to correct figures like Morris and McGann who were peddling false immigration talking points. We felt terrible for the immigrants. But we needed to correct the record. This contrived issue drew real political blood.

See how immigrants get coverage in the United States.

Chelsea Clinton and the latest controversy

These issues are resurfacing with a vengeance, as Latino voters emerge as a key voting bloc in the 2016 election. Chelsea Clinton made headlines when she was asked whether undocumented immigrants should be allowed to buy coverage under ACA:

It’s somewhat unclear what Chelsea Clinton really meant to say. Participants in state health insurance marketplaces typically receive federal financial help. The questioner made clear that he didn’t want undocumented immigrants to receive such subsidies or to be eligible for Medicaid. He just believes that those who can afford to buy unsubsidized coverage should be allowed to do so. And that’s pretty much what Hillary Clinton told CNN’s Anderson Cooper she would allow people to do:

If someone can afford to pay for an insurance policy off the exchanges that were set up under the Affordable Care Act, I support it … But it’s not going to apply to people who are in need of subsidies in order to afford that because the subsidies have to be worked out in comprehensive immigration reform.

Like everything else in immigration policy, it’s unclear that there is a politically possible, administratively feasible, intellectually coherent, and morally defensible approach here. Most Americans oppose the provision of subsidized health coverage to millions of foreigners who might be living here illegally. Liberal as I am, I can’t say that I blame the American electorate here.

Unsubsidized marketplace insurance is a better deal for immigrants who are sick or injured than it is for their healthier counterparts. The marketplaces provide community-rated premiums and other protections for people who live with expensive pre-existing conditions. Would undocumented immigrants – who are not subject to the individual mandate – receive these same protections? I’m not sure how that would actually work.

The easiest solution is morally unacceptable

The cleanest approach to our insurance market would be to exclude undocumented immigrants, as we have done. There’s only one problem: This policy is morally unacceptable.

The policy is wrong for many reasons – not least because so many undocumented immigrants are not really foreigners at all. Many have lived here for decades. Their children and their other immediate relatives are often U.S. citizens. They did exactly not show up last week to sign up for health coverage.

Yes, they have broken the law. But what about the rest of us who benefitted from their low-wage work? Employers and consumers wanted them here to pack our meat, to pick our fruit and shingle our roofs, to care for our children and aged relatives.

Our economic demand brought these workers here. That same demand for low-wage labor nurtured powerful constituencies that for decades quietly opposed stringent enforcement of American immigration law. If we wanted these workers here to exploit their labor, how can we begrudge them medical help if they happen to fall off that roof, get hurt in that apple orchard, or get sick caring for our loved ones? I don’t believe we can.

There is only one real way to address this problem: Comprehensive immigration reform. We need to bring de facto Americans out of the shadows into full citizenship. Until our broken political system can accomplish this, state marketplaces should in some fashion allow long-standing unauthorized residents to buy unsubsidized coverage.

It won’t be perfect. Nothing ever is in immigration policy. At this moment of political gridlock, it’s our only feasible, minimally decent approach.