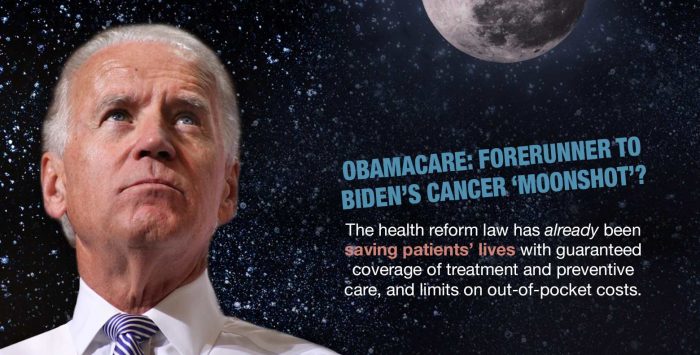 Last fall, a few months after his son, Beau, died of brain cancer, Vice President Joe Biden announced that he would spearhead a “moonshot” to cure cancer. In early 2016, President Obama laid out the details of the Cancer Moonshot Task Force, to be led by Biden. The task force aims to “eliminate cancer as we know it” and that is certainly a laudable goal.

What most Americans didn’t realize is that the Affordable Care Act had already laid the groundwork for an aggressive effort to significantly reduce cancer’s devastating impact on Americans.

Regardless of what treatments are developed, access to them typically depends on whether a patient has health insurance. Uninsured patients are much more likely to put off cancer screening, and their cancers tend to be detected at later – less curable – stages.

The ACA has sharply reduced the uninsured rate in the United States, and millions of Americans who were previously uninsured now have private health insurance or Medicaid – both of which cover cancer treatment. And the ACA has also greatly expanded access to preventive care. A wide range of preventive care – including cancer screening – is available at no charge on all non-grandfathered health plans as a result of the ACA.

Covering prevention – as important as a cure?

This may end up being just as important – if not more important – than efforts to find a cure for cancer. Numerous public health experts from the Association of Schools and Programs of Public Health (ASPPH) recently wrote to Vice President Biden, commending his efforts to fight cancer, but cautioning that while cures are important, prevention – through strategies that include tobacco cessation, cervical cancer screenings and vaccines – has thus far had the greatest impact in terms of reducing cancer mortality.

Clearly, a multi-pronged approach is necessary. Prevention and public health play a significant role, as does health care treatment that’s accessible and affordable for all patients, regardless of income or medical history. On all of these fronts, the ACA has played a significant role, and will add to whatever success the Moonshot Task Force has.

Coverage prospects were grim before ACA

Before the Affordable Care Act, patients with cancer – or even a history of cancer – were ineligible for individual market health insurance in all but five states. If they were already insured when the cancer was diagnosed, they were stuck with their health plan for at least the next several years, without the possibility of being able to shop around for better coverage or a better price.

If they were uninsured, their options were generally limited to the high-risk pool in their state – or nothing at all, if the state didn’t have an active high-risk pool. If they worked for a small company, their entire group’s rates could be increased as a result of the cost of cancer treatment. Some states had regulations to limit this, but there was no federal policy.

The ACA fixed all of that. Individual health insurance is guaranteed issue in every state, and small-group plans can no longer use a group’s medical history to set premiums. Consumers who buy their own health insurance can shop from among all the plans on the market each year during open enrollment, regardless of medical history or ongoing medical treatment.

Premiums are no longer based on an enrollee’s health status, and pre-existing conditions cannot be excluded from coverage. In 31 states and DC, Medicaid is now available to anyone with a household income up to 138 percent of the poverty level (about $33,500 for a family of four).

In short, a cancer diagnosis no longer means that a patient is locked out of the health insurance market.

The ACA has also greatly increased access to preventive care, including cancer screening. Breast cancer and colon cancer are two of the most common cancers in the United States. Thanks to the ACA, preventive mammograms and colonoscopies – along with pap tests that screen for cervical cancer – are now covered on all non-grandfathered plans, at no cost to the patient. (Prior to the ACA, coverage mandates for preventive care varied from state to state).

This is a tremendous improvement in terms of access to screening, as studies have shown that when patients are responsible for a portion of the cost of the screening tests, they’re less likely to have them done.

But it’s important to note that health plans are only required to provide free preventive care when the procedure is actually performed on a preventive basis. So if the screening is diagnostic (if there’s a reason for performing the test, other than just the fact that it’s time for the patient’s wellness exam), the patient can still be responsible for all or part of the cost, depending on the plan design.

According to a study conducted by the American Journal of Managed Care, this is part of the reason that the ACA has had limited initial impact on colonoscopy and mammography prevalence.

But when patients are diagnosed with cancer, there is no doubt that they’re better protected now than they were before the ACA. All new individual and small-group plans include coverage for essential health benefits – including prescriptions, inpatient care, outpatient care, and lab work. And there are no longer lifetime or annual maximums on how much the insurance company will pay for in-network essential health benefits. That means you won’t find out after your diagnosis that your health plan only covers generic drugs, or has a $300,000 lifetime benefit maximum.

One huge benefit of the ACA is that it caps a patient’s annual out-of-pocket expenses for in-network essential health benefits (at no more than $6,850 in 2016) – and many plans have lower out-of-pocket limits. Prior to 2014, there were no restrictions on how high a plan’s out-of-pocket maximum could be – some plans had no cap at all.

The ACA capped patients’ annual out-of-pocket spending, but the steep price of drugs and the coinsurance model – as opposed to copays – means that some cancer patients will find themselves meeting their total annual out-of-pocket maximum within the first couple months of the year. Several states have implemented regulations that limit a patient’s out-of-pocket cost for a medication to $250/month or less, and other states have considered following suit.

As with any health condition, carriers have flexibility in determining which cancer drugs are included in their formulary (covered drug list). So when a cancer patient needs to select a new health plan, the formulary is an essential tool. But R.J. Ours, Colorado Government Relations Director for the American Cancer Society Cancer Action Network (ACS CAN), noted there’s still a transparency issue in terms of patients being able to determine what their actual out-of-pocket cost for a medication will be, since most cancer drugs are covered with coinsurance rather than a copay, and the plan’s price for the drug (and thus the patient’s portion) generally isn’t readily apparent until the patient goes to the pharmacy to fill the prescription.

There are also concerns that some of the requirements imposed by health plans for prescription coverage – including step therapy, prior authorization, and quantity limits may be overly onerous to patients. ACS CAN has recommended a variety of improvements that could be made in terms of cost transparency, formulary accuracy, prescription affordability, and access to all medically-necessary drugs for cancer patients.

Ours explained that “the devil’s in the details, and now we’re down to the details. But the ACA has cut a broad swath in terms of providing access to care, checkups, and cancer screenings. And many cancer patients have been able to get health insurance for the first time ever” as a result of the ACA’s ban on medical underwriting.

As of 2014, only four out of 19 top cancer centers were included on all the networks for plans sold in their state exchanges. And networks have become narrower – with fewer PPO options and limited out-of-network coverage – in the ensuing two years. Network management is one of the few remaining avenues that carriers have for curtailing costs, and health insurers have found that consumers tend to prefer lower premiums over broad networks. But when a patient is diagnosed with a serious illness like cancer, a limited network can suddenly seem much more daunting.

While narrower networks are much more common now than they were prior to the ACA, there are various regulatory and legislative efforts underway to ensure that patients still have access to the care they need.

Plans sold through the federally facilitated marketplace are required to have a network that includes enough providers – including specialists – “to assure that all services will be accessible to enrollees without unreasonable delay.” In a February 2015 letter to insurers offering plans in the federally-facilitated marketplace, the Centers for Medicare and Medicaid Services (CMS) also noted that all plans would have to maintain an accurate provider directory, updated at least monthly and easily accessible online.

In December 2015, the National Association of Insurance Commissioners (NAIC) approved their Network Access and Adequacy Model Act, which was created in part with input from ACS CAN, and will be considered by CMS when setting network adequacy standards for future years.

The model act includes a wide range of recommendations to protect patients, including specific criteria that could be used to determine whether a plan has an adequate network, and provisions to allow patients to see out-of-network providers (with network-level benefits) if seeing an in-network provider would result in “unreasonable travel or delay.”

It also encourages state regulators to carefully review filings for tiered network plans (eg, Horizon Blue Cross Blue Shield’s new plans in New Jersey) to ensure that they aren’t discriminatory towards people with chronic or complex illnesses. The model act also sets standards for ensuring continuity of care for patients with ongoing treatment whose provider leaves (or is removed from) the plan’s network.

The NAIC model act also includes consumer protections relating to in-network facilities contracting with providers who aren’t in the same networks, calling for full disclosure to patients in advance of treatment. Legislation was also introduced in the US House of Representatives in October 2015 in an effort to protect patients in this situation.

The American Cancer Society has detailed how the ACA has been a huge step forward for cancer patients. There is still room for improvement in terms of making cancer treatment affordable and accessible for all patients, and steps are being taken to make those improvements on both a state and federal level.

But the reforms that have already been implemented under the ACA have made coverage and care much more available than they used to be.