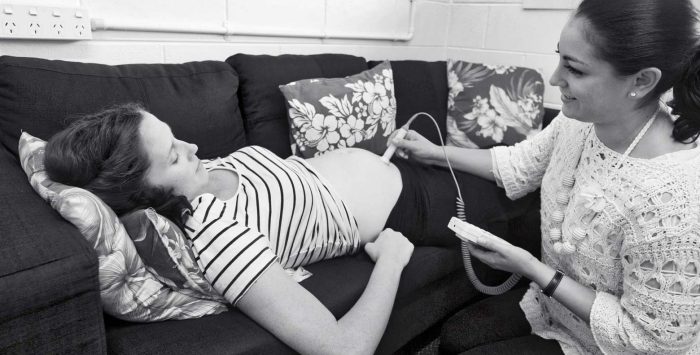 Elizabeth Criss knows all about the stigmas attached to giving birth outside of a hospital. “When I told my husband I was being interviewed about why we chose a birth center, he said I should just quote Jim Gaffigan: ‘We’re both lazy and the hospital was soooo far … the midwife was there because we believe in witchcraft.’”

In truth though, Criss did a lot of research into different birth options, and found that for low-risk pregnancies like hers, outcomes for babies are similar at birth centers and hospitals. Also, she had reservations about how quickly hospitals turn to medical and surgical interventions, which come with their own health risks; and she knew that if something happened, the midwives at her birth center, The Midwife Center in Pittsburgh, have admitting privileges at a nearby medical center. Plus, she’d been going there for well-woman visits for years before planning to become pregnant – the atmosphere was more homey and she felt more listened to than with past doctors.

“When you’re pregnant, there’s a lot going on physically and otherwise,” says Criss. “I liked that the care was more comprehensive and whole-person centered, and they don’t treat it like you’re just a uterus.”

Criss says she was happy with her experience at The Midwife Center, and she’s glad she had that option. Now, thanks to Obamacare, it’s a choice available to more women.

Advocates for birth centers say that care is more personalized, and the midwives who staff birth centers spend more time talking (and listening) to patients than obstetricians. Perhaps most importantly, they place an emphasis on seeing the expecting mother as part of the healthcare team.

“One thing I felt going through the Pittsburgh Midwife Center, is that they put a lot of ownership to you as the person having the baby,” says Criss. “You’re participating, instead of it just being something happening to you.”

“During your birth, you are in control of what’s going on,” says Kate Bauer, executive director of the American Association of Birth Centers, describing the birth center model. “You can choose to be in a tub, you can choose not to be in a tub, you can move around if you want. And throughout the whole process the midwives are monitoring to make sure that a birth center is still the appropriate place to be.”

That’s because most birth centers aren’t set up to perform surgical procedures, like C-sections and epidurals. The birth center model is designed for the 75-80 percent of pregnancies that are considered low-risk – meaning risk factors like gestational diabetes, chronic high blood pressure, etc. aren’t present – and stay low risk all the way to term. Of women who plan to give birth at a birth center at the start of labor, about 16 percent end up being transferred to a hospital, usually for pain management, and fewer than 2 percent are transferred for emergency reasons.

“Hospitals are set up to treat people who are sick,” says Christine Haas, director of the Pittsburgh Midwife Center. “Most pregnant women are not sick.” She says that midwives and birth centers try to avoid unnecessary interventions, using them as needed and not as routine.

Research shows the effectiveness of this approach. According to a 2013 study published in the Journal of Midwifery and Women’s Health, the C-section rate for U.S. women who choose a birth center was just 6 percent – compared to a C-section rate of 27 percent for low-risk pregnancies nationally.

Not only is this a better health outcome, it also saves money. There were 15,774 birth center pregnancies in the study’s sample, meaning 3,000 unnecessary C-sections were prevented, saving $4.5 million. Births outside of hospitals are still relatively rare – 98 percent of the almost 4 million births a year in the United States happen in hospitals and more than 85 percent are delivered by medical doctors.

If more women opted for birth centers, it could save billions on unnecessary C-sections alone. Stays are shorter after birth too. Families are typically discharged after six to eight hours instead of days, and babies stay with their mothers instead of going to a neonatal nursery. Altogether, according to AABC, delivering at a birth center typically costs half as much as an uncomplicated birth at a hospital.

There are a number of ways that the Affordable Care Act helps ensure pregnant women have more choices for how they’ll give birth. Most obvious is the provision saying that all insurance plans have to cover pregnancy as an essential health benefit. Prior to the Affordable Care Act, maternity care was available in just 12% of plans on the individual market.

But the ACA also says that plans can’t discriminate against any provider, “who is acting within the scope of that provider’s license or certification under applicable state law.” Certified Nurse Midwives (CNMs), who are trained in both nursing and midwifery, are licensed, independent healthcare providers in all 50 states, and some states recognize Certified Midwives (CMs) and Certified Professional Midwives (CPMs) as well. This means that across the country insurance plans can’t exclude midwives – they have to at least offer network participation to midwives on the same terms as doctors.

The ACA also took steps to ensure that midwives are paid fairly. Before the ACA, Medicare only paid midwives 65% of what doctors received for the same services; the ACA increased midwives’ reimbursement to 100%. That may not sound like a big deal, since the program serves mainly the elderly, but it really is an important change. Medicare covers pregnancies for some younger women with disabilities, but just as significantly, many private insurers use Medicare rates as the basis for what they providers. It’s common for insurance plans to negotiate rates of “Medicare plus [some percentage],” so increasing the Medicare reimbursement will likely mean higher reimbursements for midwives under private plans as well.

There were also important changes to Medicaid. Section 2301 of the ACA says that Medicaid has to cover state-licensed birth centers, providing a facilities fee to the birth center along with payments for midwives and other birth attendants who provide care there. Given the sheer number of births covered by Medicaid – it pays for nearly half of all births in the United States – the change should put birth centers on a better financial footing, and allow them to serve more low-income women. (Edit: As of 2020, midwives and birth centers had not yet gained true parity with hospitals in terms of being contracted with Medicaid managed care plans or being reimbursed by fee-for-service Medicaid at the same level as obstetricians and hospitals.)

Currently there are 316 birth centers in the U.S.; 116 of them have opened since the ACA was passed in 2010 – a 60 percent increase (Edit: This had grown to 384 by 2020, which was a 97% increase since 2010). The growth isn’t all due to the ACA – recent documentaries like The Business of Being Born have brought birth centers more mainstream attention, and social media has made it easier for women to explore and discuss choices for childbirth than in say the 1970’s, when the first U.S. birth centers opened, or 1980’s, when skyrocketing liability insurance rates forced half of them to close. Still, Bauer says, the ACA has been an important factor.

“There are birth centers in more areas of the country, providing access to more women, and reaching women of different backgrounds,” says Bauer. “We’re seeing that birth centers in rural and urban areas in particular can serve more women than before the ACA.”

Of course, the passage of the ACA hasn’t fixed every issue facing midwives and birth centers. Haas says that high deductibles and fees are still hard for a lot of women they see, and the Pittsburgh’s Midwife Center has to devote a fair amount of staff time to looking up what services are covered by each patient’s insurance and making sure they understand any out-of-pocket fees.

“Large hospitals can just write off that money if it’s not paid. As a small nonprofit, we can’t afford not to collect it,” says Haas. “But we also work with people so they’re prepared. A lot of people leave the hospital and have to wait until they get the bill, after just guessing how much they’ll owe.”

Also, even though the ACA mandates Medicaid coverage of birth center services, many states still haven’t implemented this change. The main stumbling block is that it hasn’t been clear that managed care companies, which administer Medicaid in many states, have to comply. AABC has been meeting with CMS officials, asking them to release guidelines clarifying that the mandate does apply to Medicaid managed care companies. (Edit: As noted above, this was still an ongoing issue as of 2020.)

Despite these issues though, the Affordable Care Act has still played a big role in giving more women more options for their pregnancies. Haas says it makes sense that Obamacare provides support for places like The Midwife Center. “We fit well with the philosophy of the Affordable Care Act,” she says. “We achieve high quality care while lowering costs, which is what the ACA is supposed to do.”

Rob Cullen has been writing about health policy for What If Post since 2009. Founded in 2007, What If Post is a website dedicated to helping non-experts understand America’s massively complex healthcare system and the efforts to reform it.