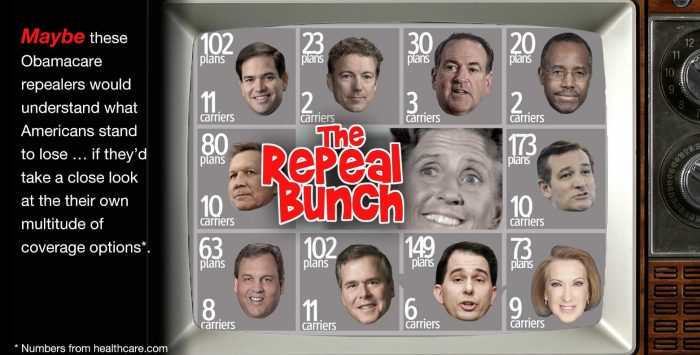 Last spring, Republican Texas U.S. Senator and Presidential candidate Ted Cruz – the same guy who spearheaded the October 2013 shutdown of the U.S. federal government in a futile effort to stop the Affordable Care Act’s private health insurance exchanges from being launched – caught a lot of ridicule and mocking when he announced that he and his family would be enrolling in … drumroll please … an insurance policy purchased via the Affordable Care Act’s private health insurance exchange.

His wife, you see, had stepped down from her job at investment/securities behemoth Goldman Sachs to help run his Presidential campaign, so Cruz attempted to make hay out of being “forced” into participating in the very law he despises and has spent the past several years desperately attempting to repeal. He, of course, claimed that he wasn’t being hypocritical because hey, people grudgingly follow laws they don’t personally believe in all the time (not smoking marijuana, for instance, or paying what you feel are unfair taxes).

However, as Washington Post columnist James Downie noted at the time :

Instead of going through the exchanges, he could have paid the tax penalty for not having insurance, “likely cheaper than buying an insurance plan,” but at the cost of being uninsured. Or his wife could have applied to COBRA and extended her benefits from Goldman Sachs for up to 18 months, though she would have to pay all of the premium. Or he could bypass the exchanges and buy insurance directly from a private insurer.

So yes, Cruz is an abject hypocrite, but this also raises a larger point: To the best of my knowledge, every one of the 17 (Oops … 16; Rick Perry has dropped out …) Republican candidates for President next year are still calling for Obamacare to be repealed. A few (Walker, Jindal, Rubio) have even proposed something resembling a “replacement” for it as well, although these have been mostly dismissed as the same unserious, reheated rhetoric which the GOP has been bopping around for six years now.

So much hate, despite many options

That being the case, just how much would the 2016 GOP clown car have to pay if they “had” to enroll in an ACA-compliant, private individual policy, instead of whatever type of coverage they have today? Thanks to this handy chart from HealthCare.com, we have a pretty good idea.

Note that the rates listed are for the candidates themselves only (and don’t include their families), and utilize 2015 rates.  For 2016, the best rates could be anywhere from slightly lower to somewhat higher, although the national weighted average rate increases look like they’ll be around 12 percent higher overall.) This will vary greatly from plan to plan, carrier to carrier and state to state. 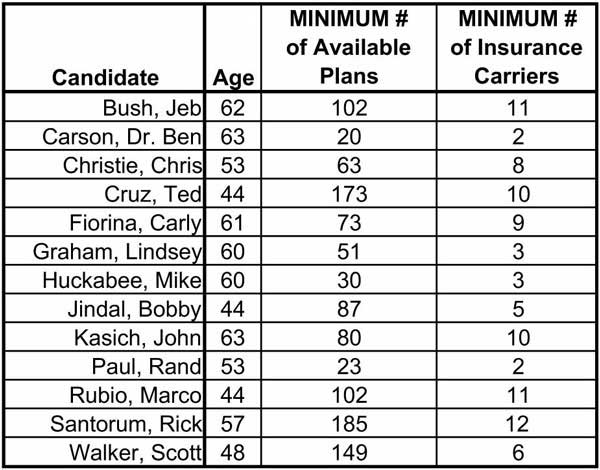 I’ve taken the liberty of reformatting HealthCare.com’s table a bit.

I’m not bothering with the Democratic candidates here since every one of them either supports the ACA (Clinton, O’Malley, Biden – if he runs) or wants to take it much further (Sanders, who’s calling for single-payer healthcare). Heck, even Jim Webb supports keeping most of the ACA – even if he grumbles about it.

I’ve also added in George Pataki and Jim Gilmore (yeah, I know, I forgot they were running as well) and have Rick Perry included as well; he may have dropped out but hey, he’s still a well-known GOP politico and still wants to repeal the ACA.

Aren’t all of these options ‘something terrific?’

Interesting side note: All three of these men (Pataki, Gilmore and Perry) are also at least 65 years old … meaning they qualify for Medicare, which is, of course, effectively single-payer healthcare. For that matter, so is billionaire Donald Trump, who wants to replace the ACA with “something terrific” … whatever that is … but I digress.

Finally, I’ve included each candidate’s known personal net worth. This is relevant since one of the major points of the ACA exchanges is to help low- or moderate-income Americans enroll in quality healthcare policies without breaking them financially.

Needless to say, every one of the people in my table above could easily afford to pay full price for the policies in question (with the possible exception of Scott Walker, who claims to still somehow be thousands of dollars in debt even after nearly two full terms of earning $144,000 per year as Governor of Wisconsin.

Marco Rubio isn’t a millionaire either (yet) – though he earns $174,000 a year as a U.S. Senator, so I wouldn’t exactly cry in my beer for his financial woes.

With that in mind, here’s how much the people pledging to take away healthcare from more than 16 million people would have to pay for their own policies if they really had to. It’s vitally important to remember that for anyone earning between 100 percent and 400 percent of the federal poverty level, the actual prices listed in my chart will likely be considerably lower. For those earning under 250 percent of the FPL, the associated deductibles and co-pays will be much lower as well … thanks specifically to the Affordable Care Act.

As you can see, there are dozens of plans for most candidates to choose from regardless of which state they’re from. I also find it noteworthy that 10 of the 16 still running are worth a minimum of $2 million apiece .. .and four of the other six (Pataki, Gilmore, Paul and Lindsey Graham) have about as much chance of winning the Republican nomination at this point as I do.

The only “under seven-figures” candidates who appear to have any chance of winning the nomination (Rubio and Walker … although even Walker seems to have disappeared into the mist of late) happen to be the ones who have at least proposed some sort of “alternative” healthcare plan … even if their plans are half-baked and utterly unworkable.