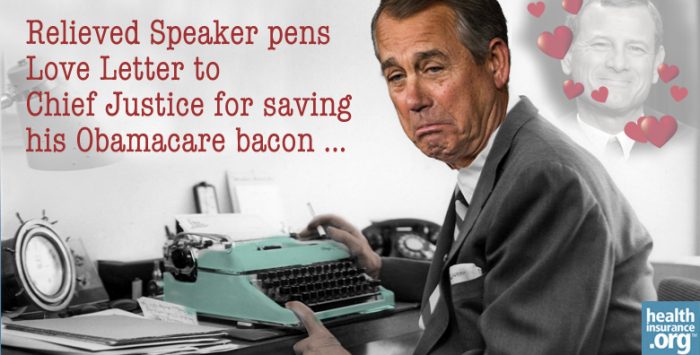 In the Supreme Court’s ruling Thursday, Chief Justice John Roberts provided a truthful assessment of what would happen to the health insurance marketplace if the requirement to purchase insurance and the federal subsidies to help people afford coverage were declared unlawful in all but a few states. It would collapse.

Because of the hyper partisanship on Capitol Hill, however, House Speaker John Boehner would be run out of town on a rail by the GOP caucus if he spoke about Obamacare with the same veracity. Boehner would never say it publicly, but he has to envy Roberts.

Here’s what I think Boehner would say in a letter to Roberts if he knew no one else would ever see it.

Being the honorable man I know you to be, you’ll make certain no one but you ever sees this. This has to stay just between you and me. Your eyes only, as they say. I’d be in a heap of trouble if the press or, God forbid, anyone in the Tea Party ever saw this.

I’m writing just to say thank you, thank you, thank you, John, for saving our political butts with that King v. Burwell decision. Seriously. I can’t thank you enough for taking one for the team. You knew that everybody in the party would question your conservative bona fides and accuse you of selling them out. But you knew, a lot more than any of them seem to have figured out, that we all would all be screwed if you had ruled the other way.

By the way, Mitch joins me in thanking you. That doesn’t mean either one of us can say anything nice about you in public. I’m really, really sorry about that, but I know you understand. You probably saw the statement my press people sent out. They had me saying what you’d expect: that Obamacare is fundamentally broken, that it’s increasing costs for millions of Americans, that your decision doesn’t change that “fact.” (Yeah, I know, I don’t believe it either, but they tell me that’s what I have to say.)

And of course they had me saying that we would continue to try to repeal Obamacare and replace it with something. As you know probably more than anybody, Mitch and I don’t have a clue what that something might be. But your ruling, thank goodness, spares us from coming up with an actual plan.

I said in my statement, of course, that we’d replace it with “patient-centered solutions that meet the needs of seniors, small-business owners, and middle-class families.” Now, thanks to you, I don’t have to come up with the details.

My favorite line in your ruling, by the way was this one: “Congress passed the Act to improve health insurance markets, not to destroy them.”

I really envy, you, John, for being able to tell the truth like that. Want to trade jobs?

All kidding aside, if I could tell the truth like you sometimes do, I’d explain to the American people that not only would a decision for the plaintiffs been disastrous for the country, Obamacare is based on a Republican idea that we used to be quite proud of. If the American people didn’t have such short memories, they would have called us out on this a long time ago. But, hey, I ain’t complaining.

I’m not sure you know this, John, but the idea of making people buy coverage from private insurance companies was developed by the folks at one of Washington’s most conservative think tanks – a quarter of a century ago.

That’s right, John, the idea of the mandate dates back to 1989 when a couple of guys at the Heritage Foundation proposed it in an article they titled, A National Health System in America. Not only that, but the American Enterprise Institute, our other big conservative think tank, took their idea and talked it up all over town.

Republicans were so fond of the idea that several of them sponsored a bill during the Clinton years that would have required every American household to obtain coverage for acute and emergency care. They called it an alternative to what we began calling Hillarycare. Now you know where Barack and Nancy and Harry got the idea of the individual mandate in what two decades later we would begin calling Obamacare.

What we said back in the ’90s was that we as a country had to deal with the growing problem of “free riding.” By that, of course, we meant uninsured people who got care, especially in the emergency room, but then wouldn’t (or more likely couldn’t) pay for it. The folks at AEI even came up with a terrific response to the criticism that a mandate like that infringes on our freedom to remain uninsured if that’s what we want to do. As AEI pointed out, society already interferes with individual freedoms by requiring Americans to contribute to Social Security.

John, my colleagues and I might have admitted that the individual mandate was a Republican idea had it not been for our good buddy and political consultant Frank Luntz. As you may remember, Frank was just as shocked as we were that Americans elected Obama as their president. Genius that he is, Frank developed a plan to help us convince people that whatever health care reform ideas the Democrats came up with would be a “Washington takeover of health care.”

I’m sure you got a copy of Frank’s 28-page plan that he called “The Language of Healthcare 2009: The 10 Rules for Stopping the ‘Washington Takeover’ of Healthcare.” He told us he wrote it after doing a bunch of focus groups. He said that based on what he heard in those focus groups, those 10 rules captured the words and phrases he believed Americans would react to in ways that would help us take back the Capitol and make sure Obama was a one-term president.

John, even though Barack is still in the White House, it was an absolutely brilliant strategy. Even before Nancy and Harry’s people had even written the first word of a health care reform bill, every Republican on the Hill had been trained to call whatever they came up with – even if it came straight out of our very own think tanks – a “Washington takeover of health care.” We were so disciplined we never got off message (except to occasionally call it a government takeover of health care). We said it so many times – and with such conviction – that Politico chose it as the “Lie of the Year” back in 2010. I’ve never been so proud.

John, had it not been for Frank, there’s no doubt in my mind we’d still be calling Nancy Pelosi “Madam Speaker,” and most Americans would he singing her and Barack’s praises for passing Obamacare.

Mitch and I are so grateful for Frank’s work we’re even thinking of putting a statue of him in the rotunda.

But I digress. Not only did you save us from having to come up with an alternative to Obamacare, you single handedly saved the health insurance industry as we know it. Not to mention the hospital industry. Did you notice that the stock price of the big for-profit hospital companies soared after you released your ruling on Obamacare? I’m sure you’re also getting thank you notes from all the hospital and insurance company CEOs. They owe you. Big time.

John, you nailed it in your very first paragraph when you wrote that doing away with the individual mandate – along with the subsidies millions of folks are getting in two-thirds of the states (most of them red states) – would lead to an insurance and health care apocalypse. You clearly listened to what our friends in the health insurance and hospital industries told you – just as they told Mitch and me – that a victory for the plaintiffs would lead to a “death spiral” in our health care system. And you knew that Republicans would be blamed for it.

So, once again, John, thanks. I know Antonin gave you a hard time in his dissent (he had me in stitches when he called your reasoning “interpretive jiggery-pokery” and “pure applesauce”) and that our platoon of presidential candidates are all but accusing you of treason (or at minimum, of being, as Ted Cruz put it, a “Robed Houdini”) but I also know you have a very thick hide.

Despite their slings and arrows, they know you really saved our hides.

Let’s grab a beer when you have time.