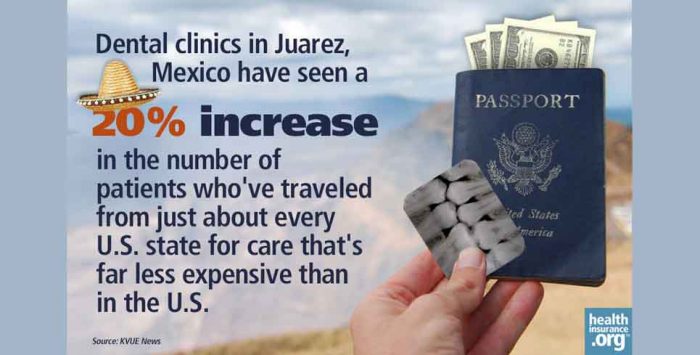 When increasing numbers of Americans cross the Mexican border to see a dentist – traveling from as far away as Chicago and even Alaska – you know we’ve got a growing health care crisis on our hands, and one that the Affordable Care Act barely touches.

For every adult without health insurance, an estimated three lack dental insurance, according to the Kaiser Family Foundation. And with the cost of dental care continuing to increase faster than the rate of inflation – and faster than all medical services except hospital and nursing home care, according to the Bureau of Labor Statistics – more and more Americans are risking their health by skipping trips to the dentist. Others are leaving the country to get the care they need.

An Austin, Texas TV station reported last month that dental clinics in Juarez, Mexico, across the border from El Paso, Texas, have seen a jump of up to 20 percent in the number of Americans who’ve traveled from just about every state to get dental care that is far cheaper than in the U.S.

As an example, a crown at the Rio Grande Dental Clinic costs approximately $400, a third or less than what many dentists in the states charge.

ACA: a dent in dental coverage?

Health care reform advocates had hoped the Affordable Care Act would help the estimated 148 million Americans without dental coverage. But while the law is expanding medical coverage in various ways, it will barely make a dent in reducing the number of Americans without dental insurance. While the ACA will increase the number of children eligible for dental coverage under existing federal programs by an estimated 5.3 million, it does not expand coverage for adults.

Anyone who has gone to a dentist recently – including those who have dental insurance – have found that taking care of our teeth is an increasingly expensive proposition. According to the Center for Medicare and Medicaid Services, U.S. residents spent $108 billion on dental care in 2011 – much of it out of their own pockets.

This is not just a problem for those most directly affected. It is affecting us all of us as taxpayers. Because of the rising cost of dental care, many Americans don’t visit dentists for routine checkups that could prevent serious problems down the road. As a consequence, many of them eventually develop dangerous abscesses that can cause excruciating pain and infections that spread to other parts of the body.

In 2009, there were an estimated 830,000 visits to hospital emergency rooms for problems that could have been treated more appropriately and less expensively in a dental office. As former Secretary of Health and Human Services Louis Sullivan noted in a New York Times op-ed last year, emergency room visits for oral health problems cost taxpayers hundreds of millions of dollars every year. The cost to Florida taxpayers alone was estimated at $88 million in a recent year.

Every year many of those who wind up in the E.R., including children, never return home because they simply waited too long to get the care they needed. That’s because of the close connection between oral health and overall health. Infections from tooth abscesses all too frequently migrate from patients’ decayed teeth to their brains, often resulting in death.

If you think that this is just a problem for the poor in this country, think again. More and more middle-income Americans, even those with dental insurance, are finding that going to the dentist for even routine care is not a possibility because of the cost.

In a survey conducted by CDHP last year, 39 percent of those polled said they or a family member had delayed a dental visit during the last 12 months. Of those who postponed care, 41 percent were middle-income Americans.

“Our survey showed that a significant share of middle-income people had also put off a dental visit because of the out-of-pocket costs they expected to pay.”

The Government Accountability Office reported in a recent study that the average annual out-of-pocket payments for dental services in the United States increased 26 percent – after accounting for inflation – between 1996 and 2010, from $520 to $653.

A Healthcare Transparency Index analysis of 2011 prices for dental services showed just how expensive dental care has become in the United States. The cost of pediatric preventive exams with x-rays ranged from $65 to $300. Removal of a wisdom tooth ranged from $1,375 to $3,735.

Other recent surveys have had similar findings. One conducted last summer by Empirica Research for Brighter.com, found that three-fourths of those without dental insurance – and half of those who did have insurance – had missing teeth, bleeding gums, toothaches or other unmet dental care needs.

One of the reasons so many of us decide against dental insurance, even if our employers pay part of the premiums, is the relatively skimpy coverage it provides for expensive services. A typical dental plan requires a 50 percent copayment for complicated procedures and high-ticket items like crowns and bridges.

Many plans have a “missing tooth clause,” meaning they won’t pay for replacing a tooth if it was missing when you enrolled in the plan. And most dental plans limit coverage to just $1,500 a year.

Another reason we skip or postpone care is the fact that there is no easy way to shop for the best prices. Research by Brighter.com found that prices for the same procedure by dentists practicing on the same street varied by 700 percent or more.

This lack of transparency and the high out-of-pocket expenditures for typical patients inspired Los Angeles entrepreneur Jake Winebaum to launch Brighter to help people find out how much dentists in their communities charge for everything from routine checkups to root canals and other complicated procedures, and use group buying power to negotiate more affordable prices.

Winebaum was inspired to start Brighter.com after his father-in-law – who is on Medicare – told him his dentist planned to charge him $6,500 for three crowns. Since Medicare has no dental benefit, he would have to pay the entire amount on his own.

“I went online to see if $6,500 was a good price or a bad price for his dental work, but I couldn’t find any reliable information on the Internet about what a crown should cost,” Winebaum said. “I found that dental patients lack price transparency and negotiating leverage, and that impacts their willingness and ability to get the dental care they needed.”

Winebaum says that giving consumers the ability to compare dentists and the prices they charge is having a significant effect on what they wind up paying. Since its launch in Los Angeles, Brighter.com’s members save an average of 50 percent on their dental care, he says. Brighter is now also offering BrighterPRO to employers to help them and their employees reduce their spending on dental care.

While Brighter.com and similar services are helping people save money, more needs to be done to improve access to dental health care services, especially in rural and poor areas of cities where dentists don’t practice. Alaska and Minnesota have taken the lead in improving access by permitting mid-level “dental therapists” – similar to nurse practitioners and physician assistants – to treat patients.

Among the growing number of advocates of expanding the dental workforce to include dental therapists – as many other countries have done – is former Secretary of Health and Human Services Louis Sullivan, who served during the George H.W. Bush administration. Sullivan and other health care advocates are encouraging lawmakers in other states to follow Alaska and Minnesota’s lead in passing legislation allowing dental therapists to practice. Several states are considering such legislation this year.

EDITOR’S NOTE: Brighter.com has been a client of Wendell Potter Consulting.