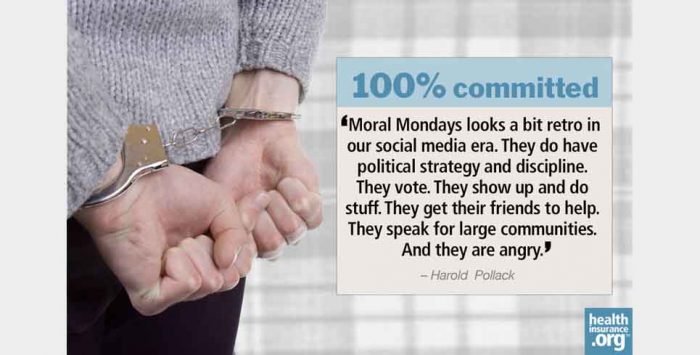 I never particularly embraced the Occupy Movement. It’s not that I didn’t share Occupiers’ outrage over depredations that produced the financial crisis. And I admired the contributions of some Occupiers in various matters of financial regulation. I’m glad that Occupy challenged and changed our national discourse regarding the undue economic and political influence of the top 1%.

But Occupy was never really my thing. I never understood its practical program. More precisely, I wanted it to pursue a concrete policy agenda pursued through coalition politics. That wasn’t what Occupy was mostly about or what it was especially equipped to do. As sociologist Todd Gitlin described, Occupy was “an outsider movement,” which “does not want to be mainstream.”

As a fastidious middle-aged liberal, I am kind of mainstream. During the time of Occupy’s greatest prominence, I was a passionate participant in the continuing fight over the Affordable Care Act. Occupiers seemed to disdain this messy exercise in incremental politics.

Indeed the process of enacting and implementing ACA wasn’t always neat or pretty. Yet Occupy’s diffidence regarding the available levers of practical politics was self-marginalizing. With considerable justice, Occupiers critiqued both parties as beholden to special interests. Yet in viewing the two parties as similarly beholden, or as pursuing similar class interests, this stance easily leads people to politically disengage.

Occupy’s diffidence contrasts all too obviously with the Tea Party’s outsized influence as a grassroots populist movement anchoring the Republican conservative base. I’ve often wished for a comparably focused and effective grassroots movement on the other side.

Perhaps my wish has been granted. If you haven’t been following the Moral Mondays movement protesting voter suppression measures and supporting Medicaid expansion in deep-red states, you should. Moral Monday gets less attention than Occupy or the Tea Party. That’s too bad, because it could have lasting impact.

At work in North Carolina

Here is some great coverage of Moral Mondays’ activities in North Carolina, where tens of thousands of people have turned out for some of the largest civil rights demonstrations since the 1960s. North Carolina provides particularly fruitful ground. The state is traditionally moderate. It went for Barack Obama in 2008. Yet conservative Republicans took over the legislature in 2010 and the governor’s mansion in 2012.

They did not let this moment of political dominance go to waste. They slashed many programs for low-income people. They spurned ACA’s Medicaid expansion that would have covered roughly 500,000 people. They enacted what Ari Berman called “the country’s worst voter suppression law, which mandates strict voter ID requirements, curtails early voting, and eliminates same-day registration.

In response, tens of thousands of North Carolinians attended civil rights rallies. Hundreds have been arrested in nonviolent protests, with more to come:

“That crowd went all the way back to the Statehouse,” says Leslie Boyd, a health care access activist who was arrested after the state opted out of Medicaid expansion money. “Seeing these middle-aged and older women smiling politely, walking out in handcuffs, that was just incredibly inspiring.”

Moral Mondays looks a bit retro in our social media era. Many foot soldiers are conventional, middle-aged church people. Many lack Twitter accounts. They may not have heard of Reddit. They do have political strategy and discipline. They vote. They show up and do stuff. They get their friends to help. They speak for large communities. And they are angry.

I can’t speak with expertise about voter suppression – except to repeat that it’s dishonorable to seek partisan advantage by hindering others’ efforts to cast lawful votes.

Work to do on Medicaid expansion

I can speak to health reform, whose great tragedy remains states’ refusal to expand Medicaid. As Jon Gruber noted here last week, Medicaid expansion is a great financial deal for states, with the federal government initially providing 100 percent of the funding, and then reducing the subsidy to 90 percent. Nonetheless, conservative states have chosen to shut 5 million people out.

A recent Urban Institute report from the Health Reform Monitoring Study quantifies the obvious consequences. The below chart shows the percentage-point increase in insurance coverage among Americans with incomes low enough to qualify for ACA’s Medicaid provisions. 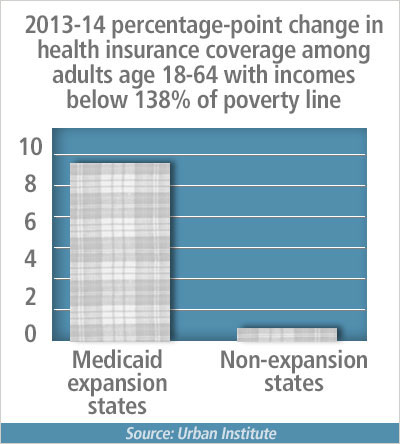 I should mention that this is not some goofy FOX graphic designed to mislead. The vertical axis indeed starts at zero. If anything, the graph understates the differences between expansion and non-expansion states. Most of the data were collected in early March, before the final enrollment crush.

Millions of people in expansion states are Medicaid-eligible but are not enrolled. This isn’t ideal, but if something bad happens, at least they can get help. And yes, many of the states that now reject Medicaid are the same ones that bitterly rejected Medicaid in the 1960s.

I don’t know whether Moral Mondays will succeed. I know that it deserves to, and I think it will.