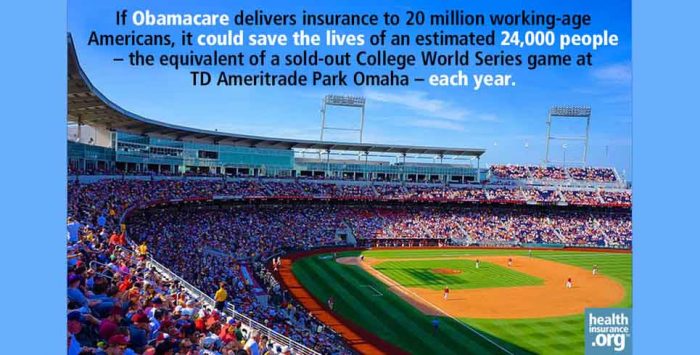 It is a pleasure to read beautifully conducted studies on important subjects. Annals of Internal Medicine published one such study today by Benjamin Sommers, Sharon Long, and Katherine Baicker, three of the most prominent people researching health reform.

Insurance and its effect on mortality

Their study, “Changes in mortality after Massachusetts health reform,” explores the reduced number of deaths associated with that state’s 2006 “RomneyCare” expansion of health insurance coverage. These bipartisan reforms provided the model for what became the Affordable Care Act. Researchers therefore pay especially close attention to this experience trying to predict the likely accomplishments and disappointments we can expect from ACA.

Experts have long disagreed about the impact of health insurance on mortality. I’ve never quite known what to think myself. If you scour the academic literature for respectable estimates of how much we might lower mortality rates among the uninsured, respectable estimates vary from 0 percent to 40 percent. Although we know many ways that insurance improves people’s lives, it’s really, really hard to gauge how many lives would actually be saved by covering the uninsured.

The most basic challenge is simple. Death is rare. It also arises from many causes, only some of which can be addressed through health insurance coverage. The annual mortality rate among American adults between the ages of 25 and 64 – the group most likely to actually be uninsured – is less than 0.4 percent.

Because death is so rare among the non-elderly, we’d need a huge randomized clinical trial to tease out these effects. Suppose, for example, that I do a beautiful, multi-million-dollar trial that leads 2,000 people who would have been uninsured to instead receive insurance coverage for a year. This is the order of magnitude of the famous Oregon health insurance experiment (OHIE) that I’ve noted here before. Let’s further suppose that going uninsured raises mortality rates by 25 percent – an estimate provided by the Institute of Medicine (IOM) that has been regarded as as too high by Megan McArdle and other skeptics.

Under the IOM’s assumptions, I would expect about 10 deaths among 2,000 people in a control group of uninsured study participants who remained uninsured. I would expect to see about eight deaths in the treatment group of 2,000 people who got covered. Amid all the random events that happen in the real world, this difference of two deaths between the treatment and control groups is too small to reliably detect.

That’s why randomized trials such as the OHIE don’t directly examine the impact of health coverage on mortality. Of course, in principle, one might nail these questions with a hugely expensive ten-year randomized trial involving hundreds of thousands of people. In practice, that’s not going to happen.

Digging into 10 years of mortality data

Sommers, Long, and Baicker do the next-best thing. Using ten years of mortality data over the period 2000-2010, these authors compare trends in Massachusetts counties to those observed in similar counties in states that did not expand insurance coverage. They use a method called propensity score matching to find especially similar counties for a fair test.

Some details are complicated. The final results are admirably clear. Deaths from causes amenable to health care declined by about 4.5 percent in Massachusetts compared with comparison counties. The annual number of deaths declined by an additional 8.2 per 100,000 non-elderly adults in Massachusetts, with larger results for counties with low average incomes and ones that began with lower rates of insurance coverage.

The authors perform smart checks to rule out possible biases. They examine trends among the elderly, who were basically unaffected by 2006 reforms. For this group, they find no difference in mortality trends between Massachusetts counties and others. Relative mortality reductions were also most pronounced for conditions that are actually amenable to medical intervention.

When these researchers account for actual coverage increases brought about by these reforms, they conclude that giving someone health insurance reduces the annual risk of death by about 30 percent.

What it takes to save one life

Sommers, Long, and Baicker then perform an intriguing calculation. They estimate that 830 adults would need to gain health insurance coverage to prevent one death per year. That benefit may seem disappointingly small. Saving lives is pretty hard these days.

It’s not so cheap, either, but it’s still worth it. Another back-of-the-envelope calculation is instructive. Suppose that a state spends $4,000 annually for each additional person assisted to obtain coverage. This implies cost of this intervention per life saved would be about 830 x $4,000 = $3.3 million for every life saved. That’s not pocket change. Indeed some other interventions such as targeted prenatal care interventions to poor women or evidence-based therapies to help people quit smoking are probably more cost-effective.

And if saving lives isn’t enough …

These calculations don’t consider other key benefits associated with insurance. Fewer people with diabetes will suffer nonfatal but awful complications such as blindness or limb amputation. Fewer sick people will incur crippling medical debts. In the Oregon experiment, health coverage was also associated with striking reductions in stress, depression, and self-assessed mental health.

The absolute numbers are also striking. The Congressional Budget Office estimates that ACA will reduce the ranks of uninsured adults by something like 20 million people. I rather heroically extrapolated the authors’ 1/830 estimate to the entire uninsured population across the U.S. This back-of-the-envelope calculation implies that ACA will prevent something like 24,000 deaths every year. That’s almost the number of Americans who die in auto crashes. It’s more than the number who die of AIDS or the number who are murdered every year.

That’s a crude calculation, of course. The authors understandably avoided such a calculation in their paper. One study of Massachusetts can hardly pin down the mortality reduction we can expect from a huge national policy. Still, the findings allow us to glimpse an order of magnitude, which is pretty impressive.

Our study shows impacts in most of these domains as well, but it’s really only the last item – survival – that remained in doubt … Our study is not definitive, and there probably won’t ever be a definitive [randomized clinical trial] with enough sample size and follow-up to test this question, but I do think we’ve added a lot of evidence to support the notion that expanding health insurance can save lives.