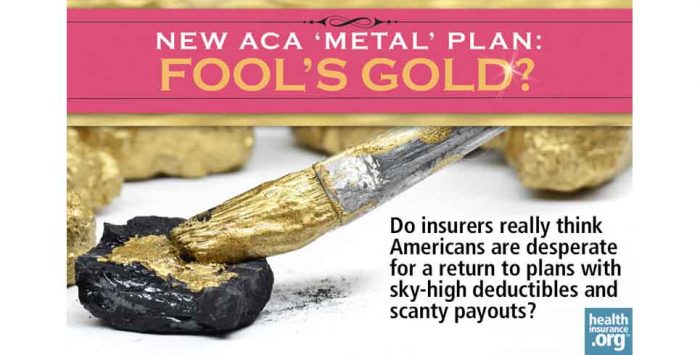 The health insurance industry’s top lobbyist is suggesting that what our health care system needs now is a new kind of insurance policy that has a lower premium but that also provides less coverage.

Karen Ignagni, who heads America’s Health Insurance Plans (AHIP), the big PR and lobbying group for insurers, floated the idea a few days ago during a C-SPAN interview in Washington.

Ignagni contends that one of the reasons many uninsured people didn’t buy coverage on the individual market during the recent six-month open enrollment period was their inability to afford the premiums.

She has a point. Recent stories in The New York Times and other publications have quoted people as saying that they decided to stay uninsured because of the cost of coverage. But is allowing insurers to once again sell skimpy policies the right way to go?

I don’t think so.

It’s important to keep in mind first and foremost who Ignagni works for. Associations like America’s Health Insurance Plans exist to protect and enhance the interests of their member companies, which in AHIP’s case includes big corporations like UnitedHealthcare, WellPoint/Anthem Blue Cross, Aetna, and my former employers, Humana and Cigna.

Despite what association executives might say publicly about what they think consumers need and want, always remember who is paying their handsome salaries. They are not being paid to represent the interest of consumers and patients.

I have personal knowledge that this is true of AHIP. During my 20-year career as a health insurance executive, I spent many hours on conference calls and in meetings at AHIP’s offices on Pennsylvania Avenue in Washington, about halfway between the White House and Capitol Hill.

Rest assured that Ignagni would not have proposed this new tier of coverage if the insurance companies that comprise the membership of AHIP hadn’t asked her to. Also rest assured that her mentioning it on C-SPAN is a clear indication that getting Congress to allow them to sell cheap coverage again has become a legislative priority for the industry.

Prior to the passage of the Affordable Care Act, insurers in several states were able to sell what many consumer advocates referred to as junk insurance – policies with such limited benefits and/or sky-high deductibles that paying the premiums for such coverage was usually a big waste of money.

Consumer Reports in particular has published stories over the years about how thousands of people found out when it was too late – when they got sick or injured – that their policies were woefully inadequate. Many people who were enrolled in those plans were forced into bankruptcy because of the medical bills they were on the hook for after a serious illness or accident.

Aware of this, members of Congress who drafted the ACA were determined to ban junk insurance, and they did. But instead of requiring that all policies contain the same level of coverage, they created four benefit levels to be offered in the health insurance marketplaces (exchanges), and they named them Platinum, Gold, Silver and Bronze.

Although all the data are not yet it, it appears that the most popular choice of marketplace shoppers this year was Silver, which requires enrollees to pay 30 percent of their health care costs.

Is another tier necessary?

In the C-SPAN interview, Ignagni claimed that people liked being able to enroll in policies that required them to pay even more than 40 percent of their total medical costs.

“That’s what people preferred to buy because they wanted to keep their premiums low,” she said.

She went on to say, rather elliptically, that she would like to see a lower tier created “so that people could gradually get into the program, so that they could be part of the risk pool so we don’t hold the healthier people outside so the process could be working the way it was designed – so we get the healthy and the sick.”

She seemed to be suggesting that the pool of people who did buy insurance during the open enrollment period didn’t contain quite enough young and healthy people to spread the risk adequately.

A few days after her comments, however, the department of Health and Human Services reported that there was a surge of young people who bought coverage shortly before the April 15 open enrollment deadline. More than 8 million people enrolled in coverage through Healthcare.gov the state exchanges, and an additional 5 million qualified for Medicaid coverage.

HHS said that of the 8 million exchange enrollees, 28 percent were young adults aged 18-34, which is better than many health policy experts expected. Further, more than eight in 10 of the exchange enrollees qualified for subsidies to help them pay their premiums and out-of-pocket expenses.

There undoubtedly would have been far more newly insured Americans had not half the states refused to expand their Medicaid programs as authorized by the ACA. In those states that did not expand Medicaid, millions of people who otherwise would have been covered were, in many cases, indeed priced out of the insurance market.

As a result, many of the people who are in greatest need of help paying their premiums in the states not expanding Medicaid – including many young and healthy adults – chose to remain uninsured because financial help was not available to them.

Health insurers would love to be able to sell policies with extremely high deductibles again because they are very profitable. Insurers never have to pay out much in claims when people enrolled in those plans get sick or injured. That’s why, in my opinion, the insurance industry wants us to believe that people are hoping for a return of “the old market (that) had very high deductibles,” to use Ignagni’s words.

Indeed there are some people who are upset that “the old market” went away. They are the CEOs who call the shots at AHIP and who suggest things for Ignagni to say on C-SPAN.

If health insurers were genuinely interested in getting more people covered, they would be spending more time and resources encouraging all the states to expand their Medicaid programs.

If instead we continue to hear Ignagni lobby for a return of health plans with sky-high deductibles, I have a name for the new tier she is proposing: Fool’s Gold.