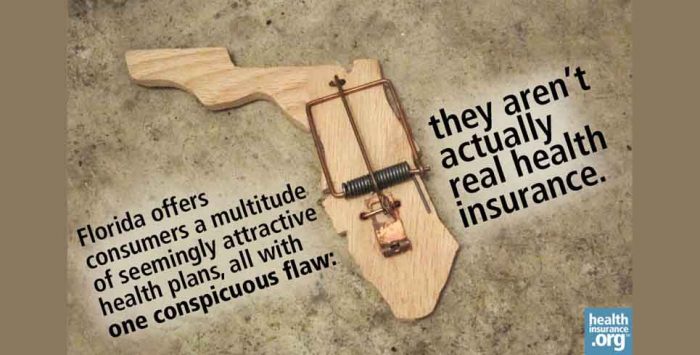 [Update, February 9, 2015: The Florida Health Choices program detailed below has enrolled a total of 66 people as of February 2015, while more than 1.3 million Florida residents have enrolled in real health plans through Healthcare.gov.  Clearly, most people are not falling for the junk plans.]

The first ACA open enrollment has been more successful than even the predictions made before the troubled exchange roll-outs last fall. Eight million people enrolled in new private plans through the exchanges, and millions more have enrolled in Medicaid or in ACA-compliant plans outside of the exchanges. This bodes very well for the sustainability and long-term success of the ACA.

But especially in this first year – as we transition to the new regulations – there’s plenty of confusion. Only 39 percent of uninsured Americans knew in mid-March that open enrollment ended on March 31. And in the first several days of April, there were news stories quoting consumers and even brokers who had just recently become aware of the fact that off-exchange policies could not be purchased outside of open enrollment.

There is no doubt that many people will try to buy insurance between now and November (when the 2015 open enrollment begins) and find out only at that point that they have very little in the way of options unless they experience a qualifying event that triggers a special open enrollment window. As time goes by, the ACA’s reforms will be better understood by the American public. But in 2014, there is a significant market for non-regulated, skimpy policies that can be purchased outside of open enrollment.

And there will certainly be some companies and agents who take advantage of the misperceptions surrounding the ACA and the relatively captive audience they have outside of open enrollment. Some people who missed open enrollment might decide that something is better than nothing and purchase a skimpy plan, knowing that they will still have to pay the shared responsibility penalty for 2014. But consumers with less knowledge about health insurance might purchase one of these plans believing that it’s real health insurance.

Although the ACA is doing an excellent job of regulating the individual and small-group insurance markets, there are loopholes in the law that allow short-term insurance, health care sharing ministries, fixed indemnity plans, accident supplements, critical illness policies, dental/vision plans, and discount plans to continue to operate without complying with ACA regulations.

Some of these options – like accident supplements or dental policies, for example – pair well with a comprehensive health insurance policy, but are not meant to be stand-alone coverage. Short-term policies are the closest thing to “real” insurance that’s available outside of open enrollment, and they may be a good choice for healthy people who need coverage until open enrollment begins in the fall. Not everyone can qualify for a short-term plan however, since they still use medical underwriting.

But among the other plans available outside of open enrollment, there are less expensive options – that provide very little in the way of coverage – that may seem attractive to people who aren’t familiar with how the plans work. Unfortunately, these consumers might only find out how poor their coverage is when they’re in the middle of a medical crisis.

Medical discount plans are some the worst of these options, but their slick marketing sometimes makes people believe they’re purchasing health insurance, when in fact, they are not. Discount plans often use glossy brochures and fancy websites that display testimonials and examples of savings on various procedures.

Think of those claims as being on a par with an ad for a weight loss product that shows a lady who lost 125 pounds in six months … with tiny print at the bottom saying “results not typical.” If it sounds too good to be true, it is. If real health insurance is going to cost your family several hundred dollars a month (before subsidies), there is no way that a product being sold for a tiny fraction of that cost is going to provide solid coverage.

And when you dig into the details of medical discount plans, you’ll understand why they’re so much less expensive than health insurance: All they provide is a discount; the patient is still responsible for paying the remaining bill in full. Plans may say they provide discounts “up to 75 percent off” but “up to” means anywhere between zero and 75 percent.

Their marketing examples are best-case scenarios, and also tend to be for relatively low-cost medical bills (pregnancy, broken arm, etc.). They don’t provide illustrations of how their plans help someone with medical bills that reach $850,000 in a single year. That’s because a medical discount card wouldn’t do much at all for someone in that situation. There’s no cap on out-of-pocket costs with a discount plan, and discounts tend to be less impressive for high-cost, specialized care.

Discount plans can certainly be a trap for the unwary. But sometimes they are marketed by sources that would seem to be reputable – even a state government.

Florida has been among the most obstructionist states when it comes to ACA implementation. Not only have they resisted the ACA at every turn, but Florida lawmakers actually created a state-run (and initially state-funded, to the tune of $2.4 million so far) program that for now is selling only discount plans.

Florida Health Choices – described on its website as “Florida’s Insurance Marketplace” – was created by a law that passed in 2008. It currently offers consumers a choice of 19 plans, and they’re all discount plans. Since the website has the approval of state legislators, it’s reasonable to assume that uninsured consumers will believe that the options on the site provide good coverage.

The site says that individual health plans with comprehensive coverage are “coming soon” (and they note that full implementation of the program is scheduled to take 18 months). But when I spoke with a representative, she told me that there wasn’t likely to be anything other than discount plans for at least the rest of this year.

The representative I talked with gave an example of how a person with health insurance who needed a dental policy could shop for dental coverage through Florida Health Choices. (The dental plan they offer is also just a discount plan). She said all of the plans are “gap coverage, not a replacement for health insurance” and she said that she certainly wouldn’t call their offerings a good solution for people who are uninsured.

Not offering insurance at all

But the website seems to obscure those details a bit; none of the available plans are insurance, yet it bills itself as “Florida’s Insurance Marketplace.” And ironically – given that they are currently only selling discount plans – they denigrate the notion of “one-size-fits-all” coverage, explaining that:

“Florida legislators foresaw that the ever-changing health care environment created a need for small employers and individuals to be able to access health insurance and health services without the hassle of dealing with the “insurance buying process” or only providing a “one-size-fits-all” plan.”

Most consumers count on brokers, navigators, carriers, and the government (especially state governments, which many people trust more than the federal government) to provide them with advice and guidance. To a consumer who is unfamiliar with how medical discount plans work, the policies offered on the Florida Health Choices website might seem very appealing, especially since there are family memberships for just $25 a month. And the fact that the website is backed by the state of Florida no doubt puts consumers’ minds at ease.

There’s a brief FAQ section on the site, and although the answers do acknowledge that the plans being offered are not ACA-compliant, there is no mention of the fact that people who purchase these plans as their only coverage will still have to pay the shared responsibility penalty if they are not eligible for an exemption.

Compounding the problem, Florida has not expanded Medicaid, and has an estimated 763,890 people who are in the coverage gap: they earn too much to qualify for Medicaid, but too little to qualify for subsidies in the exchange. The coverage gap in Florida exists because the Supreme Court allowed states to opt out of Medicaid expansion, and Florida chose to do so.

Yet in a document released by the Florida legislature last year to describe their bare-bones alternative to Medicaid expansion (which has not gone anywhere yet), they explain that the program would “fill the coverage gap created by Obamacare…” But Obamacare did NOT create the state’s coverage gap. That was Florida’s doing.

More people are in the coverage gap in Florida than any other state except Texas. They have no realistic options for health insurance coverage. They cannot afford to pay full price for private health insurance, and their state turned down $51 billion that the federal government would have provided over the next decade to fund Medicaid expansion. And shamefully, with so many people in the coverage gap, the state has devoted resources to creating and operating their “Health Insurance Marketplace,” which is thus far offering only discount plans.

If you missed open enrollment and are still uninsured, your best choice is a short-term plan if you can qualify for one. You may have a qualifying event this year that will allow you to enroll in an ACA-qualified plan, and if your employer offers a mid-year open enrollment that you declined last year, you can avoid the shared responsibility penalty for this year as long as you enroll during your group plan’s 2014 open enrollment.

Contact a broker, navigator, or your state exchange to see what options you have. Be aware that the plans being marketed outside of open enrollment are not regulated by the ACA (Nevada is an exception; ACA-compliant plans are available there year-round outside of the exchange, but with a 90 day waiting period).

Although there are reputable carriers that have created supplemental plans which can be purchased outside of open enrollment and might be useful to some consumers, there are also plenty of bottom-feeder organizations that are poised to take advantage of consumer confusion.

Read the fine print to make sure you understand what you’re getting – and what you’re not getting – when you buy a policy that isn’t regulated by the ACA, even if it’s marketed by an organization you trust.