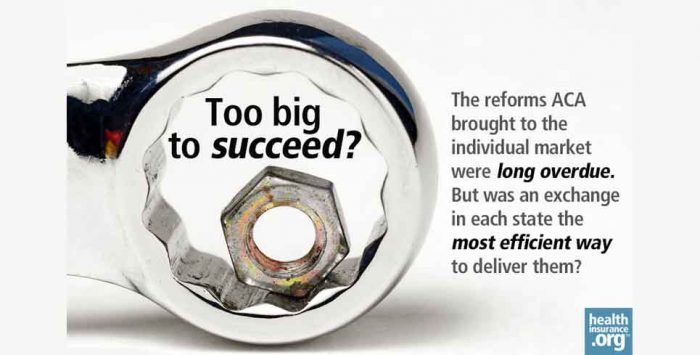 Now that 2014 open enrollment has ended, administration officials, exchanges, carriers and consumers have begun dissecting the last six months to see which aspects of open enrollment worked well, and which ones could be improved upon before 2015 enrollment begins in November.

This is the time for brainstorming, but how much are we willing to change? Could we revamp the whole process if it meant a more streamlined, less expensive health insurance shopping system? What if we kept all of the ACA’s market reforms and consumer protections, but without the exchanges?

I fully support the ACA and the changes the law has brought to the individual market. I love the fact that access to an individual health insurance policy is no longer contingent on one’s medical history. The tax credits make health insurance much more affordable for a large chunk of the population, and that’s a crucial element of the law’s success.

Standardized health insurance policies that all cover the ten essential health benefits are a huge improvement over the patchwork quilt of policies that used to cover the individual market. Those plans ranged from excellent coverage to very poor limited benefit policies, and it was often difficult for a consumer to determine which was which.

Was the wheel reinvented?

The reforms that the ACA has brought to the individual health insurance market were long overdue. But did we really need the exchanges themselves as shopping platforms? HHS Secretary Sebelius has said that the exchanges make it possible “for the first time ever” for people to see “side-by-side comparisons of plans.” But for many years before the ACA was written, websites were available that allowed consumers to compare multiple health insurance options in one place, and apply for coverage online.

The shopping mechanism that the exchanges offer replicates similar platforms that were in use long before the exchanges opened for business. Exchange call centers absolutely provide useful assistance to consumers who need guidance, but the technical services that the exchanges perform could be completed by the carriers themselves, without the need to route everything through the exchange.

It’s far more complicated now. Consumers are still utilizing an online shopping platform (the exchange), but their applications have to be transmitted first to the exchange and then to the carrier. Some exchanges accept payment with the application and forward it on to the carriers, but most wait for the carrier to send out a bill to the consumer. When a consumer wants to switch from one carrier to another during open enrollment, the exchange is now in the middle of the whole process.

When there are problems with delayed enrollments, ID cards that aren’t sent out, or missing invoices, there’s a paper trail that has to meander its way through the exchange on its way to the carrier. Savvy brokers know that the only way to solve some of these issues is to organize a conference call that includes both the carrier and the exchange – and there’s often still plenty of confusion even when all entities are on the same phone call.

So what if we did all of this without the exchanges? It’s not reform blasphemy to suggest that they might not be as important as they’ve been held up to be.

We know that they’re certainly expensive, with operating costs that can be around $50 million per year for a single state. Although the federal government provided the bulk of the start-up money that the state-run exchanges needed, they are required to be financially self-sustaining as of 2015. Even in states that have very functional exchanges, officials are scrambling to figure out their ongoing funding.

In states that have struggled with technological problems in their exchanges, the financial aspect of creating and operating an exchange is even more concerning. Their return on investment is limited due to a combination of enrollment that’s lower than expected, and costs that exceed projections.

By January 2014, Cover Oregon and the Oregon Health Authority had spent almost $200 million on the state’s exchange website that has been widely regarded as a near-complete failure. It wasn’t until the last few weeks of open enrollment that Cover Oregon was able to enroll anyone online, and the exchange had to extend general open enrollment through April in order to continue enrolling people who couldn’t complete their applications by the end of March.

Maryland has spent $125 million on its exchange so far (including staffing, enrollment assisters and the call center), and has recently decided to scrap the existing exchange technology and spend $40 million to $50 million to switch to the technology being used by Connecticut’s much more successful exchange.

Because of technical difficulties that have plagued Nevada Health Link, the exchange’s enrollment has been far lower than initially predicted. As a result, the exchange spent $199 per member to enroll people who received help from application facilitators. They had expected that number to be about $42 per member, but low total enrollment (less than 35 percent of their original target) meant their costs were spread over a much smaller population than anticipated.

When it comes to the HHS-run exchange that is operating via HealthCare.gov in 36 states, there has been plenty of controversy about how much the exchange platform has actually cost. The total was pegged at $174 million in August of 2013, but Sebelius updated that figure to $319 million by the end of October, with another $358 million that could still be billed.

For fiscal year 2014, CMS has requested $2 billion to operate the federal exchanges for one year (including $450 million that will be collected as user fees). Some of the higher figures that have been reported for HealthCare.gov’s implementation costs include money spent by the IRS to create and operate the Federal Data Services Hub. That money would have to be spent regardless of what sales platform is used – even without the exchanges, we’d need the IRS to be involved and the Data Services Hub to be operational in order for carriers to verify subsidy eligibility for applicants.

But we could have implemented (and still could going forward) all of the ACA’s reforms without recreating the shopping wheel. As long as the Federal Data Services Hub works smoothly and allows carriers to access premium tax credit and cost-sharing subsidy eligibility information, the enrollment process could use the same shopping platforms that it has ever since the internet became a mainstay in American homes.

In states that didn’t have robust online health insurance brokerages, the free market would have ensured their arrival once health insurance became mandatory and heavily subsidized. But most states were already served by numerous brokerages that offered easy comparison of available policies, and online applications. Linking those application sites to the federal data hub would mean that subsidy eligibility could be calculated for any applicant and applied to any application.

There was a direct-to-carrier pilot program in three states during this first open enrollment, but that could be the rule rather than the exception. We don’t need to distinguish between on and off-exchange plans. They’re all ACA-compliant, and plans from each carrier are combined into the same risk pool in each state, regardless of whether they’re sold on or off the exchange.

In fact, eliminating the exchanges would remove one element that can still contribute to a two-tier risk-pooling system in the individual health insurance market: Carriers that have opted to only sell off-exchange plans have risk pools that are separate from the exchange risk pools, simply because they don’t have any exchange plans to add into the mix.

People who are shopping off-exchange tend to be wealthier than average (i.e., not eligible for subsidies, which are only available in the exchanges). For a variety of reasons, wealthier households tend to enjoy better health than lower-income families, and they’re also less likely to have been previously uninsured and have pent-up demand for healthcare.

So it stands to reason that some carriers that have avoided the exchanges altogether might have a healthier risk pool going forward. If we eliminated the exchanges and allowed all plans to be subsidy-eligible, it would remove one factor that contributes to a possible disparity in risk pool composition (the ACA’s risk mitigation programs eliminate some of the problem, but we can do more to equalize the risk pools by simply making all individual plans subsidy-eligible, without distinguishing between on and off-exchange policies).

Removing a layer of complication?

Overall, the exchanges add a layer of complication to a process that is already pretty complicated. When I first wrote about the possibility of implementing the ACA without using the exchanges, we were only a couple months into open enrollment and the exchanges were struggling from a technology standpoint.

Those problems have been largely worked out, although there are certainly some state-run exchanges that are still dealing with glitches and technological issues. But even when the exchanges are running smoothly, they add additional steps to the process of buying and maintaining health insurance, and are expensive to operate.

What the ACA did very well was reform the individual health insurance industry. But it also added additional bureaucracy to the system, and we need to really consider whether the exchanges are providing measurable value to consumers, or if they might just be clunky extra moving parts to maintain and fund as we go forward.

Is there a better way?

We can’t necessarily say that the exchanges should be scrapped altogether, but we also shouldn’t just assume that they should remain in place simply because they were part of the original healthcare reform legislation. There may be a better, more efficient, and less expensive way to go about the actual sales process.

We need to keep the primary goal in focus: Insuring as many Americans as possible. Funding and maintaining new sales platforms for health insurance products should be a distant second goal, and should not be confused with the primary goal.

States that have struggled with the cost or technical aspects – or both – of running their own exchanges shouldn’t worry that switching to HealthCare.gov indicates a lack of support for healthcare reform or is in some way selling out. It might just be a good financial decision that takes advantage of economies of scale and only requires one new sales mechanism for the whole country, instead of a separate one for each state.