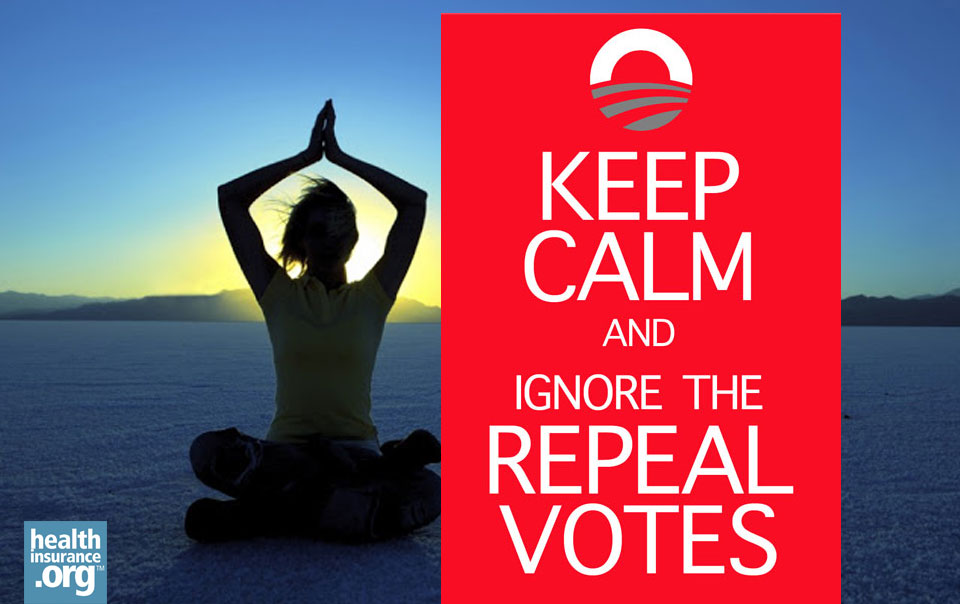 It’s a sour and angry time in Washington, D.C. Despite the fact that the U.S. Supreme Court found the Affordable Care Act to be constitutional, despite the early benefits of the law (adult children staying on their parents’ plan until 26, no lifetime limits on insurance, no pre-existing conditions for children, free preventive care, etc.), despite the success of states like California or Vermont in preparing for the insurance marketplace open for enrollment in October 1 of this year – despite all this, the attempts by Republicans to stop “Obamacare”proceed unrelentingly.

Within a few days, the GOP-controlled House of Representatives has suggested they may introduce three bills (that will go nowhere in the Senate and thus die): one vote to endorse the delay of the employer mandate (to entice Democrats to vote for it and then set them up for an embarrassing no vote on the next one); a second bill to delay or overturn the individual mandate; and possibly a third vote to ban the IRS from doing anything to implement the law.

Why this sudden flurry of legislative action from a Congress that has done almost nothing so far this year (only 15 bills signed into law)? With the Administration’s announcement last week that they would delay the reporting requirements of the employer mandate and penalties until 2015, Republicans have found a small hole in the fabric of Obamacare, and they are pulling desperately at every thread they can in order to delay or stop this law.

Should you be worried that the rest of Obamacare will just unravel under these attacks? The short answer is no. After discussions with Washington insiders and key health policy experts this week, I’ve concluded that the consensus seems to be the following:

While the employer mandate reporting may be delayed a year, the mandate itself will not be overturned. Starting in 2015, employers with more than 50 employees will still be required to offer health insurance to their employees or pay a penalty per employee.

The reason for the delay was to give these larger companies more time to comply with the reporting requirements of the law. Delaying implementation further could cost something like $10 billion a year in expected revenue generated by penalties.

No delay – or repeal – of individual mandate

According to those knowledgeable about the implementation process, the individual mandate requiring individuals to buy insurance or pay a penalty, however, will not be delayed or overturned. Although the Republicans are making the argument that it is unfair to let business off the hook while still mandating individuals to pay a penalty, and that argument is resonating with a portion of the public so far, the mandate is essential to the success of the insurance marketplaces. (Ironically, it was a Republican policy before the Democrats adopted it).

If only the sickest people enroll in the plans offered by the exchanges, the ability to spread costs across the whole risk pool will be jeopardized and prices could increase substantially. The insurance companies offering their products through the exchanges are demanding an individual mandate that will require participation, because if there is no mandate, they are asserting they will not be able to accept everyone.

Another reason the Administration gives for opposing any delay is that the individual mandate already has a phase-in. The fairly modest penalty for not purchasing insurance starts at $95 per person or 1 percent of annual income (whichever is more) and increases over a three-year period, giving everyone the opportunity to evaluate their options carefully and make decisions accordingly.

The most anticipated part of Obamacare is the state-based exchanges or “marketplaces” where you can find insurance for yourself and your family. They are still on track to be operational by January 1, 2014. Open enrollment will begin in states like California October 1, 2013, and Covered California has a web site up and running to help you figure out how you can participate.

Even if you are not lucky enough to live in California, 17 states and the District of Columbia are making good progress in setting up their own exchanges; 27 states have declined to develop their own exchanges and will default to a federally operated exchange; and six states are participating in a “partnership” with the federal government. (Check out the state where you live to see your state’s progress).

There is some concern about states that made the decision to outright oppose the ACA and stall their implementation for political reasons. Can they can meet the January 1, 2014 deadlines, even with federal assistance? If the federal process for setting up these exchanges is obstructed, you can be sure where the blame will be placed.

You will hear argument after argument about how Obamacare is unraveling. It’s a “train wreck”. It will be more expensive than what we have today. It will cause the fall of western civilization as we know it. Try to ignore these gloomy and negative predictions. Those who hate Obama and Obamacare are not persuadable to the contrary.

The Administration strategy is to keep working on the implementation and ignore the political swirl as much as possible. They are depending on the rest of us to have some patience and common sense.

While the implementation of a law of this magnitude will no doubt be uneven and full of surprises, it is not fair to blame the Obama Administration for the many Republican attempts to defund, destroy or delay the law. Keep your focus on the process in your own state and keep the pressure on your politicians to make affordable insurance available to you.

Dr. Linda Bergthold has been a health care consultant and researcher for over 25 years. She worked on the Clinton Health Reform plan and was the head of the Obama health care blog team in 2008. Her previous articles for healthinsurance.org include HHS gets specific on ACA’s essential benefits and Will the real Mitt Romney stand up? or SHOW up?