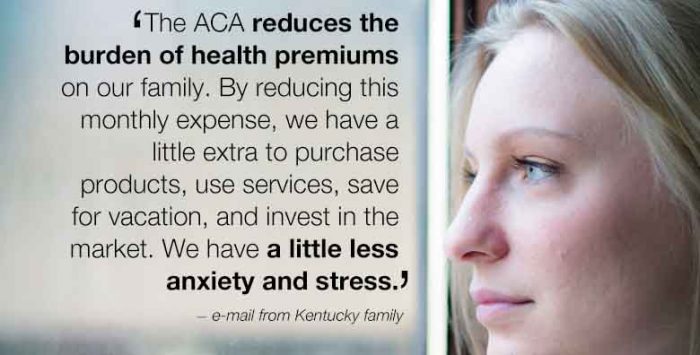 A few days ago I posted a widely read deconstruction of the baker’s dozen lies Mitch McConnell told about the Affordable Care Act in his debate with Alison Lundergan Grimes (plus another dozen or so confusing or downright bizarre points which came up during the five-minute exchange with the moderator).

The major standouts were:

I stand behind everything I said, but let’s face it, most of what I write is number-crunchy bean counting. What’s far more important is what the law means for actual people. The human factor can’t be underscored enough.

‘A little less anxiety and stress month to month’

Fortunately, the very next day, I received an e-mail from a Kentucky resident who expressed the reality of the situation there far more eloquently than I did. Here’s a snippet:

The ACA reduces the burden of health premiums on our family. By reducing this monthly expense, we have a little extra to purchase products, use services, save for vacation, and invest in the market. We have a little less anxiety and stress month to month. Why do we want a healthcare system that takes more and more from our incomes and places stress and anxiety on individuals and families? I hope we would not. It makes no sense.

Laws and policies shape the free market. There is no true ‘free market’; there is a reason why large dollars are spent on lobbying. So the question is not whether Government should be regulating the market, but how and what it should be regulating. Healthcare is big business. It reaps large profits for insurance companies and investment returns for shareholders. Our healthcare is not patient-centered; it is profit-centered.

I invite you to read the whole thing.

I immediately asked him if I could post the letter publicly, and he explained that sure, that was kind of the point: To get the word out about what the ACA means to him and his family in Kentucky … and what a shame it would be to see Mitch McConnell and his cronies have a chance of taking it all away again.

The cold, hard economics of Medicaid

The following day I received another e-mail from a Kentucky resident … a self-declared Republican. He first noted that 80 percent of the residents of his county are on Medicaid. (I’m not sure if that was before or after ACA expansion.) But then her returned to the other side of the equation: cold, hard economics.

To his credit, he was polite, respectful, thoughtful and he raised a fair point:

I think that it truly depends on your hospital demographic as to whether you benefit under the ACA, but that is not my biggest concern. What happens in 3 years when my state and all the other states that expanded Medicaid have to pay for it?

You see, we all forget that someone MUST pay the bill at some point and most people probably think it will not even be in their lifetime, so why worry? Please do not misunderstand; the system needed reform and the Republicans, of which I am one, obviously have no clue what really needs to be done, but this ACA is not what all liberals and Democrats think it is.

Again, read the whole letter; I was genuinely moved by what he had to say, no snark.

The following is my response to the second letter. (I responded to the writer by e-mail, but I’m posting the response here for the first time.)

First, thanks for politely and intelligently articulating your questions and concerns. Most ACA opponents who have contacted me have been rude and/or insulting.

Regarding your concerns over the Medicaid issue:

In other words, your concern about cost to the state after 2016 is a valid one, but it’s not nearly as dramatic of a change as you may think; it’s phased in over a nine-year period.

As for what happens from 2022 on: by that point the healthcare industry will be in a completely different situation than it is now. Hopefully, the other provisions of the ACA will also have improved things as much as Medicaid expansion has. Perhaps it won’t, but either way, things will be different in many different areas, making it difficult to project what the tax/budget situation will be for Kentucky or any other state at that time. (CORRECTION: Again, see my note above.)

The bottom line is that when it comes to people who are unable to pay for decent medical care themselves, you really only have two options:

There really isn’t a third option. Since #1 isn’t really an acceptable one, that leaves #2.

And since we’re stuck with #2, the best path is to do what we can to try and keep that cost down as much as possible, which includes things like preventative care, education, more efficient record keeping and placing regulations on price gouging by all parties: the insurance companies, the healthcare providers, the device makers, the pharmaceutical corporations and, yes, fraud on the part of the patient.

Personally, I support single-payer for all (or at the very least a publicly financed healthcare insurance option anyone can buy into to help keep the private companies in line). However, for good or for bad, the ACA is what we ended up with, and I believe it’s still a lot better than the prior system, so it behooves me to keep track of how well (or poorly) it’s working and hope for the best.

I hope this has answered some of your concerns, or at least that I’ve explained where I’m coming from on the issue.