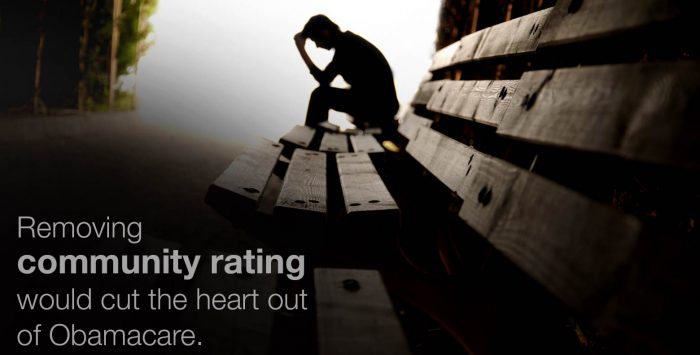 While Congress is taking its annual Easter recess, Republican leaders are quietly developing a new plan to repeal and replace Obamacare. If there is one thing you don’t want to see in that plan, it is the gutting of something called community rating.

Community rating is the one thing that keeps insurance companies from gouging most of their customers. It’s the thing that helps makes the health insurance marketplace even remotely fair.

Community rating: about to be demonized

But you can expect a big PR campaign to demonize community rating. You’ll be told that it stifles competition. You’ll hear that we need to get rid of it to reduce the cost of premiums and encourage more young people to jump into the insurance pool. If the PR campaign is successful, by this time next month, you’ll believe that only a Karl Marx-loving socialist would support community rating.

But here’s the one thing you need to know: it was the defining feature of the very first health insurance plans sold in this country. And it originated in Texas, which is about as far as you can get ideologically from the land of Marx.

How it prevents discrimination

What community rating means is that no one in a given community can be charged more for the same policy because of age, gender, health status or occupation. If the community rating requirement is deep-sixed, insurance companies will once again be able to charge people in their 40s, 50s and early 60s far more than they can today.

And they’ll also once again be able to discriminate against women and people who’ve been sick in the past, and even against people who have jobs that insurance company underwriters don’t like. If health insurance bean counters ruled the world as they’d like, cops, firefighters and even nurses would be out of luck. Underwriters consider their jobs to be risky. They’d be declared uninsurable, just as would people born with birth defects or other congenital disorders.

Born in Texas (not Russia)

Not only are community-rated health plans not part of some communist plot, they developed as a free-market alternative to health care reform ideas proposed by leaders of the U.S. Socialist Party in the early decades of 20th century. And they got their start in the Lone Star State.

We can trace the origin of community-rated plans to Baylor University Hospital in Dallas. As I wrote in my first book, Deadly Spin, a Baylor administrator, Dr. Justin Ford Kimball, devised a strategy to deal with the hospital’s mounting expenses. His idea was to have groups of local residents, beginning with Dallas teachers, pay 50 cents a month and receive up to 21 days of hospital care – if needed-during any year. It was called the Kimball Plan, and it became so popular that other nonprofit hospitals began offering similar plans.

Although those first plans mandated that enrollees use only the hospitals that initiated them, so-called “free-choice” plans, which allowed enrollees to choose their own “participating” hospital when they got sick or injured, began popping up all over the country. They were all community rated, and they were all operated on a nonprofit basis.

In just a few years, all those tax-exempt plans were united under a common name, Blue Cross, and a common trade group, the Blue Cross Association. Similar plans offering coverage for physician care soon became common. They were united under the name Blue Shield. It wasn’t long before all the Blues came together under an expanded trade group that continues to this day: the Blue Cross Blue Shield Association.

For years, almost all health plans in the United States were community rated and operated on a nonprofit basis. Many of the Blues still claim nonprofit status, as does Kaiser Permanente and several other local and regional plans.

The rise of unaffordable coverage

Eventually, though, big for-profit life insurance companies looked at the health insurance market and saw an opportunity to develop a profitable new line of business. Their idea was to offer policies with lower premiums – but only to the youngest and healthiest in a community.

That desire to make a few extra bucks for shareholders was the beginning of the end of true community-rated plans and the beginning of insurance premiums becoming unaffordable to people that insurance underwriters didn’t favor. When the for-profits lured the most desirable customers away from the nonprofit Blues, the Blues had no alternative but to mimic the big insurers. They, too, began assembling an army of underwriters.

As years went by, many of the Blues began converting to for-profit status. (Most of the for-profit Blues are now united under the name Anthem, a huge New York Stock Exchange corporation.) As more and more insurers – even the remaining nonprofits – abandoned community rating and began hiking premiums for all but the youngest and healthiest males (and even young and healthy men who worked in jobs that sometimes put them in harm’s way for society’s benefit), the ranks of the uninsured began to swell.

Increasing numbers of Americans couldn’t buy coverage at any price before Obamacare as underwriters began blackballing prospective customers for one reason or another. And if you’re blackballed by one insured, good luck persuading another company to sell you coverage. One of the first questions on a health insurance application before Obamacare was, “Have you even been denied coverage?” The nonprofit Blue Cross Blue Shield company in my home state of Tennessee rejected 34 percent of applicants in 2011 before most Obamacare requirements went into effect.

When President Obama signed the Affordable Care Act into law, the number of uninsured Americans had grown to more than 50 million. While some of the uninsured were people who made a conscious decision to “go bare,” most were people who simply had been priced out of the health insurance marketplace – and they were priced out largely because of the consequence of the demise of community rating.

Over the objections of insurance company executives and underwriters, Congress included a provision in the Affordable Care Act to restore community rating as much as possible. Thanks to that one provision, that one thing, insurance companies can no longer blackball you because you’re a breast cancer survivor or charge you more for being born with a congenital disorder – or being born female for that matter.

The one exception is that insurers can charge you more as you get older – that’s why it’s called modified community rating – but they can’t charge older folks more than three times as much as younger folks for the same policy.

A repeal target worth resisting

The restoration of community rating, coupled with tax credits and subsidies to help people pay their premiums and out-of-pocket expenses, has done more than anything else to restore a little bit of fairness in the health insurance marketplace.

Don’t let the coming campaign of misinformation about community rating fool you. We can’t afford to go back to the days when insurance company bean counters determined whether you could get the care you need.

Call your member of Congress now – before they consider another round of ACA repeal legislation – and tell them that any bill that removes community rating is a bill that will make coverage unaffordable again.