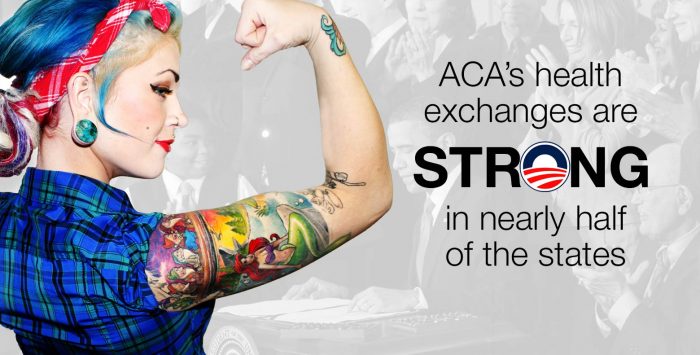 Are the ACA exchanges in a “death spiral”? The day after Republicans pulled their American Health Care Act without a vote in March, President Trump tweeted that “ObamaCare will explode.” Earlier in the month, he had tweeted that the law was “imploding.” One way or another, he seems confident that the law will fail.

No death spiral for the Affordable Care Act

But also in March, FactCheck.org noted that “Republicans repeatedly claim that Obamacare is in a “death spiral,” collapsing of its own weight. This is wishful thinking on their part, with little evidence to support it.”

And a Standard & Poor’s analysis published in early April reported that “the ACA individual market is not in a “death spiral.” But it isn’t on a stable footing either.” The S&P report noted that 2016 was the first year that Blue Cross Blue Shield plans across the country had an overall average profit rather than an average loss. But they also clarified that “more time is needed for this market to mature before consistent underwriting profits are possible.”

The state of your state exchange

Although the ACA is a federal law that applies in every state, insurance markets are regulated at the state level, and markets vary considerably from one state to another. So although it may be true that the ACA markets overall are not in a death spiral, there are certainly some states where the situation is precarious, even without further destabilizing action on the part of the Trump Administration.

I’ve taken a look at the exchanges in all 50 states and Washington, DC, and have grouped them into three rough categories. I considered several factors, including the change in enrollment totals from 2016 to 2017, the number of insurers offering coverage, the percentage of premiums spent on claims, and state-based regulations and involvement in the operation of the exchange. Some of them were a toss-up, as they had characteristics that could put them in more than one category.

And a lot could still change over the coming weeks and months. Many more exchanges would end up in the “in danger” category if, for example, Anthem were to opt for an exchange exit, or if the Trump Administration were to take actions that cut off the flow of cost-sharing reduction funds to the insurance companies. But this analysis is based on the information we already have.

These are states where the exchange is anticipating significant upheaval for 2018, or experienced large enrollment drops for 2017. They each have somewhat unique situations, and their circumstances could certainly stabilize over the next few months. But more so than most other states, their exchanges are somewhat precarious at this point.

Although there are five states that have just a single insurer participating in the exchange in 2017, I did not include most of them in this category, simply because they don’t fit the pattern of an impending death spiral.

If a state or area of a state is facing the distinct possibility of having no insurers at all in the exchange (Knoxville, Tennessee is currently in that situation for 2018), there is obviously a problem. But a single insurer in an otherwise healthy exchange is not in and of itself a problem. More competition is desirable, but as long as premium subsidies keep coverage affordable and plans continue to be available in all parts of the state, an exchange can be viable long-term with just one participating insurer.

That said, these are the states that seem to have the greatest possibility of struggles in 2018:

Alaska, and possibly Minnesota, would have been in this category if not for the state-based solutions they’ve recently implemented (a reinsurance program in Alaska, and a state premium subsidy in Minnesota). 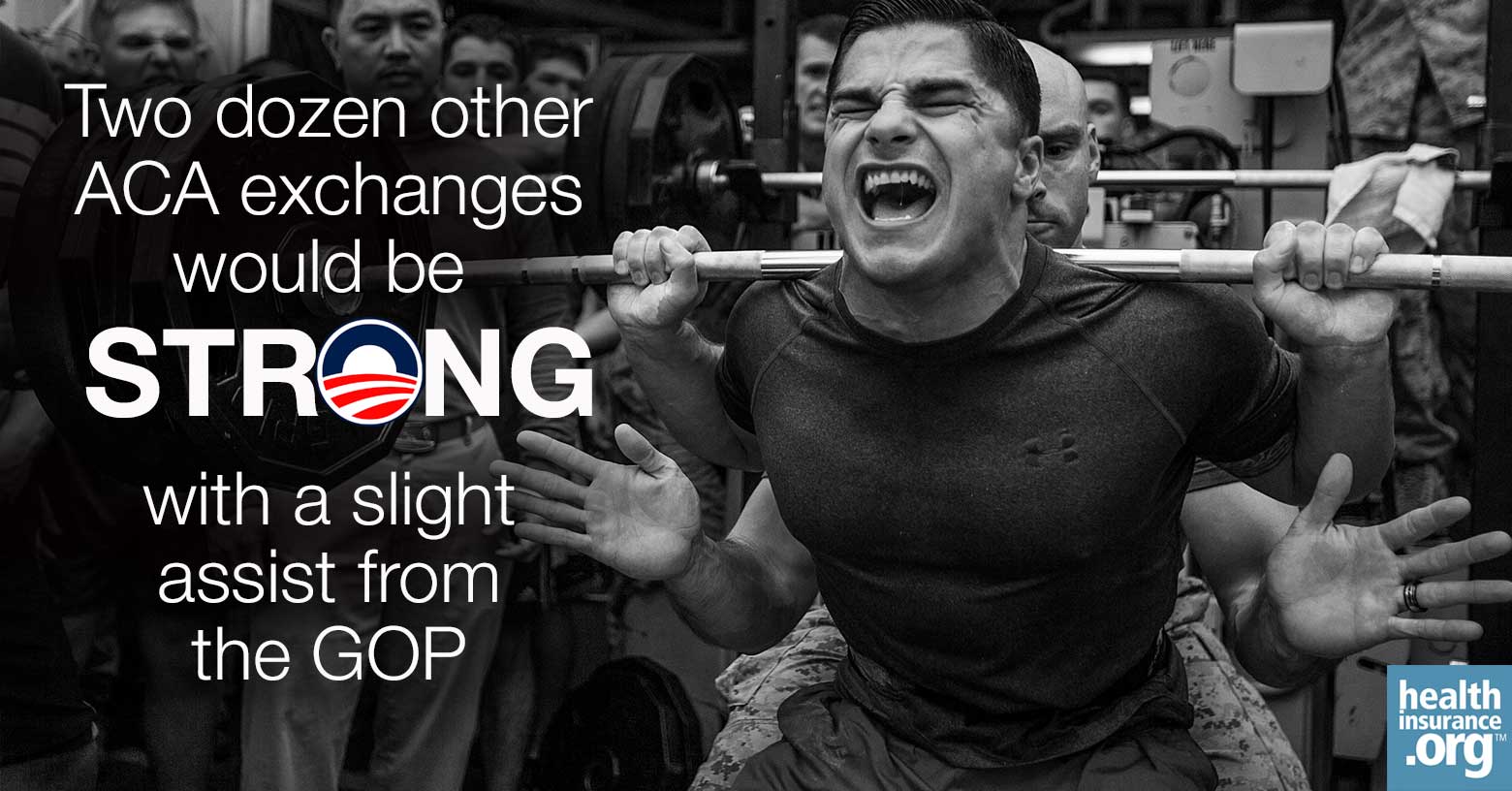 This category encompasses a significant number of states. Some have several participating insurers, while others have just one.

Most of these are states where enrollment remained fairly steady for 2017, but some (like Georgia, for example), have several participating insurers but saw a significant decrease in enrollment this year. Oklahoma and Wyoming, on the other hand, have just one exchange insurer, but saw enrollment growth this year (which is the opposite of a death spiral trend).

Most of these states have several participating insurers. Some have strong state regulations that protect the marketplace, and others saw enrollment growth in 2017. This section includes a lot of states that established their own exchanges and/or expanded Medicaid under the ACA, although there are some exceptions.

There’s no guarantee that these exchanges will remain strong in the face of Trump Administration actions that destabilize the markets, but for now, they’re in fairly good shape.

In March, the Congressional Budget Office scored the American Health Care Act, and noted in its analysis that “the nongroup market would probably be stable in most areas under either [the ACA] or the [AHCA]. The CBO believes that the individual markets are on track for stability with the ACA as it already exists.

There were some fairly high premium increases and high-profile insurer exits heading into 2017, but there aren’t actually that many truly endangered exchanges, assuming the Trump Administration doesn’t take actions that destabilize the insurance markets.

Some of the troubles that have plagued the ACA markets thus far were a result of Republican efforts to derail it. (Examples? Refusal to expand Medicaid in 19 states, adding a measure to a must-pass budget bill that retroactively eliminated federal funding for risk corridors, and cutting off pre-paid advertising for HealthCare.gov in the final week of 2017 open enrollment.) And Republican lawmakers have spent the first part of 2017 pushing legislation to repeal various parts of the ACA.

How Trump can buoy – or sink – your marketplace

But even without legislation, ACA market stability heading into 2018 will depend in large part on how the Trump Administration proceeds.

Included in the list of things the Trump Administration can do is the action they take with regards to the House v. Price lawsuit over the legality of the ACA’s cost-sharing subsidies. The federal government paid insurers $7 billion in 2016 to offset the cost of providing more robust coverage to lower-income enrollees, but the ongoing funding of those subsidies has been challenged in court, and the current ruling is that the subsidies are being illegally funded. If the Trump Administration drops the appeal that the Obama Administration began last year, the cost-sharing subsidies would dry up, throwing the markets into disarray nationwide.

Although HHS recently published final regulations intended to stabilize the individual market, their solutions aren’t addressing the issues that matter most to insurers: enforcing the individual mandate penalty, and ensuring that the federal government will continue to fund cost-sharing subsidies.

On the contrary, Trump and Republican lawmakers have been working to relax or eliminate the individual mandate penalty altogether, and in April, Trump indicated a threat to withhold cost-sharing subsidy funding as a bargaining chip to get Democrats to come to the table on health care reform.

So to be clear, a lot is in the hands of the federal government right now, both administratively and legislatively. (What happens with the AHCA when lawmakers return from the Easter recess?) But the exchanges in most states were not in a death spiral pattern when the Trump Administration took over.