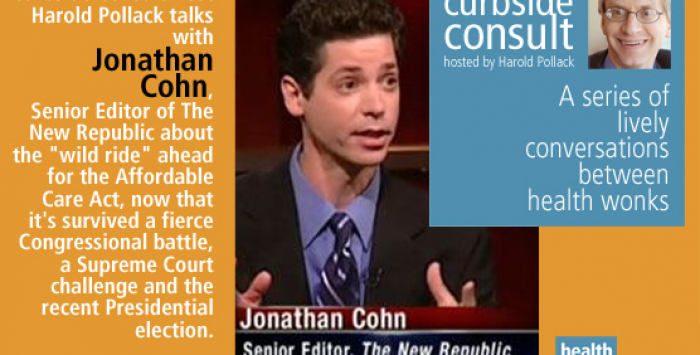 Jonathan Cohn is a senior editor of The New Republic. Along with the Washington Post’s Ezra Klein, the New York Times’ Robert Pear, and a few others, he is one of the nation’s most widely read and respected reporters covering health policy.

His award-winning 2007 book Sick chronicled the plight of uninsured and underinsured Americans. The New Yorker’s Atul Gawande called Sick “stunningly important … In one damning true story after another, Jonathan Cohn lays bare the tragedy of our health care system.”

Jonathan originated and ran an influential New Republic blog called “The Treatment,” covering the daily fight over health reform. In 2009 and 2010, I was a special correspondent for “The Treatment.” Having Jonathan as my editor there was a highlight of my career.

We sat down for a video conversation regarding how health reform is going, the President’s inaugural address, and other matters. I hope you enjoy it.

In Part One of our Curbside Consult interview, we talk about the “wild ride” ahead for the Affordable Care Act, now that it’s survived a fierce Congressional battle, a Supreme Court challenge and the recent Presidential election.

We also talk about Medicaid and the pressure on Republican governors to expand the program in their states.

Jonathan explains that he’s happy Obamacare has survived, but he also predicts that … even in states embracing the reform law … implementation will be tricky. And in states OPPOSED to the law? “It could be a real mess,” he says.

In Part Two of the interview, I get Jonathan’s take on President Barack Obama’s 2013 Inaugural Address and we discuss the 2012 elections. And we discuss Jonathan’s hopes and fears for the year ahead.