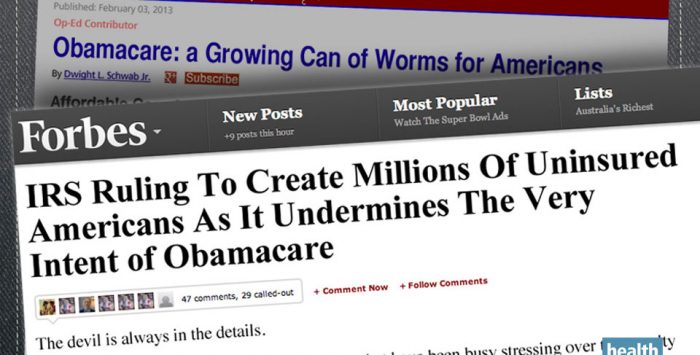 Under the Affordable Care Act, Americans who are not offered “affordable” insurance at work can purchase coverage in the ACA’s health insurance exchanges, where many will be eligible for generous subsidies.

The law defines “affordable” as insurance that costs less than 9.6 percent of income. But the ACA doesn’t specify whether it is referring to individual coverage or family coverage, which is always far more expensive. The wording is ambiguous, an “oversight,” say many legislators.

Now the Internal Revenue Service (IRS) has ruled that the government will look at the cost of coverage for an individual – not a family – when deciding if a plan is “affordable.”

A disaster for Obamacare?

Yesterday, Forbes ran a story about the rule under a headline that blared, “IRS Ruling to Create Millions of Uninsured Americans as It Undermines the Very Intent of Obamacare.”

Forbes’ take plays right into the conservative claim that Obamacare is a disaster. “We are now entering the crucial phase of the law’s enactment,” crows blogger Dwight L. Schwab, “and many critics are saying, ‘I told you so.'”

Whoa! Let’s look at Forbes’ argument, and the numbers.

Forbes observes that, according to the Kaiser Family Foundation’s 2012 survey of employee benefits, on average, workers contribute $951 annually for an individual plan. But those buying family coverage fork over $4,316, “a number well in excess of the 9.5% of earnings for someone making just $35,000 a year.” Yet, under the IRS decision, “only the portion of the contribution attributable to the individual employee” can be “considered for the purpose of determining what is affordable – not the entire contribution.”

Forbes’ contributor Rick Ungar offers an example: If an employee who earns $35,000 and “is the sole breadwinner in the family” pays less than $3,325 annually for his own insurance … “nobody in the family qualifies for participation on the healthcare exchanges and nobody can qualify for the intended government subsidies.” If the employee signs up for a family plan with his employer it would cost “over 12 percent of their annual income … a crushing amount.”

“The result,” Ungar says, “will be millions of spouses and children left to go uninsured.”

Let’s begin with that last sentence. Just how many children would be shut out? Bruce Lesley, president of First Focus, a children’s advocacy group, estimates that 500,000 children could remain uninsured.

A U.S. Government Accountability Office (GAO) report offers a similar estimate … that “460,000 children may be left uninsured if states stop funding the Children’s Health Insurance Program (CHIP) beyond 2015.” (Funding ends in 2015 because legislators assumed the ACA would protect kids.) “Federal funding could be extended,” the GAO notes. (My guess is that, if necessary, Congress would expand CHIP funding.)

Forbes’ example of a single-breadwinner family is the exception, not the rule. Among families earning $25,000 to $60,000, 67 percent of mothers and 85 percent of fathers work.

In these cases, couldn’t each parent purchase insurance through their employer? In an e-mail, health policy consultant and researcher Linda Bergthold (also a healthinsurance.org contributor) replies, “Yes. And since employers have to cover dependents (but not spouses), the parent with the better coverage should carry kids on his or her plan.”

Finally, the IRS’ decision will only affect families with income under $45,000. For those earning more, a $4,316 contribution toward a family plan wouldn’t exceed 9.6 percent of income. Even if the IRS had decided differently, they wouldn’t have qualified for a subsidy.

The claim that, as a result of the IRS ruling, “millions” will be left uninsured is fear-mongering, pure and simple.

As Washington & Lee law professor Timothy Jost points out in an e-mail, the IRS decision is “unfortunate, but not a disaster for Obamacare.” Moreover this is not the bombshell that gleeful conservatives suggest: “The Congressional Budget Office (CBO) has interpreted the statute this way all along” says Jost, “so these won’t be additional uninsured.”

Could Congress or the courts override the IRS rule?

“Congress could, but this Congress won’t,” says Jost. As for the courts, “it could be challenged in court, I would think, because it is an interpretation of the statute, one that I think is incorrect.”

Will a court address the issue? This remains to be seen.