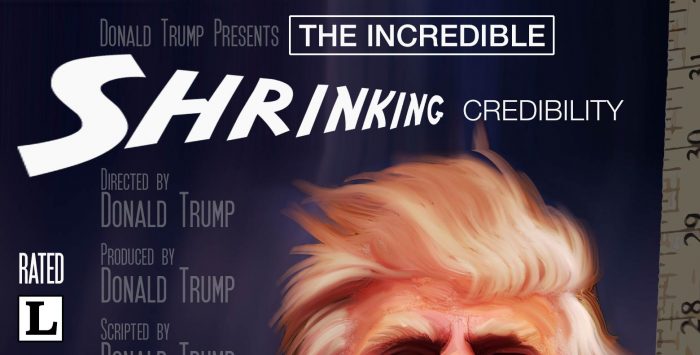 You could say that Donald Trump and his administration aren’t afraid to kick a man when he’s down. That’s probably what they were thinking today as HHS served up Obamacare’s final enrollment numbers and topped them off with this:

Obamacare has failed the American people, with one broken promise after another. As noted in the report today from CMS, premiums in the ACA marketplace have increased 25 percent while the number of insurers has declined 28 percent over the past year. We look forward to providing relief to those who are being harmed by the status quo and pursuing patient-centered solutions that will work for the American people.

The official statement from HHS – which went out to healthcare reporters – was trademark Trump. In fact, the only thing that could have made it sound more like it came straight from the Obamacare Hater In Chief’s lips would have been a single word at the end “Sad.”

But many reporters surely felt the zing of the cheap shot – which was announced as such in a “here it comes” intro from HHS spokesman Matt Lloyd:

Given Obamacare enrollment numbers released by CMS today, please feel free to include the following statement in your stories attributed to me as an HHS spokesman:

Yes, the administration probably felt like it was kicking Obamacare when it’s down. But it’s got to be clear to anyone who’s been paying attention since the very start of the debate over health reform that the GOP has had a single purpose: to actually bring the law down and then convince Americans that it was collapsing on its own.

It hasn’t been collapsing on its own. It’s had problems that were fixable all along, yes, but mostly, it’s been succeeding: enrolling millions of Americans who couldn’t get affordable comprehensive coverage before Obamacare was in place. You know – during the “good old days.”

But that didn’t stop an endless series of Republican pot shots – all through the law’s infancy, then at the hands of states that stonewalled it, then through Congressional moves to defund it. We thought one of the cheapest shots ever at President Barack Obama and his signature achievement would be the cancellation of already-paid-for ads promoting this open enrollment period – as enrollment was on a record-setting pace – in a desperate last-minute attempt to hamper burgeoning enrollment.

We were wrong. Republicans – who are now saying they’re going to “repair” the law as public outcry escalates over the impending disaster of reckless repeal – can’t resist calling it a failure. Even when it’s changed millions of lives for the better. The #alternativefacts continue to roll out. The credibility gap continues to widen.

We know what to expect: No matter what happens with the law … no matter how high its successes reach … they will always go low.