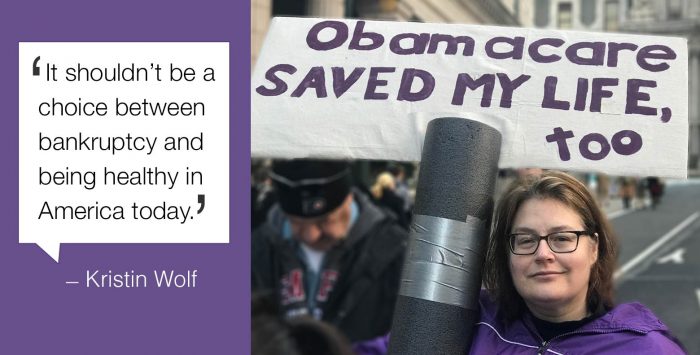 Who’s going to be hurt when the Affordable Care Act is repealed? If you consider yourself middle-class, like Kristin Wolf, the answer is you.

You’ve been told for years that Obamacare has been bad for the middle class. That’s it’s the reason premiums are increasing and why more people are in high deductible plans.

You’ve been told that once it’s repealed everybody will be “beautifully covered.”

That would be great. But Kristin Wolf isn’t buying it. And neither should you.

Wolf was one of thousands of protesters who turned out on the streets of Philadelphia on January 26 when President Trump met with Republican lawmakers, who were in the City of Brotherly Love for their annual policy retreat. She carried a sign that said, “Obamacare Saved My Life, Too.”

An all-too-familiar story in middle America

Wolf, a graduate of The Catholic University of America who now lives in Phoenixville, Pennsylvania, fits the description of “hard-working American.” She has a decent paying job at a medical equipment company, although, like many other Americans, there have been times when, through no fault of her own, she has been between jobs. I’ve been there, too, and chances are, you have, too.

Another thing Wolf shares in common with many of us is her less-than-ideal health status. For her, though, her health status has been less than ideal since she was a kid. Most of us have some kind of pre-existing condition. For Wolf, it’s Type 1 diabetes. It’s also called juvenile diabetes, and for a good reason: it often starts in childhood. Even infanthood.

Wolf said she was diagnosed with it when she was 11. About 15,000 children and teenagers are diagnosed with it every year in this country. People with Type 1 diabetes produce little or no insulin. There is no cure. You don’t outgrow it. If you have it, you have to have regular insulin injections for the rest of your life. If you don’t, you die. And insulin, which costs very little to make, is not cheap in this country. The cost has soared from $100 a month a few years ago to about $500 or even more now.

I have a cousin with Type 1 diabetes. I’ve seen her give herself shots at the dinner table. It’s not fun to watch. Not fun for her, either, of course. But at least she has Medicare, so her insulin is covered.

The son of a highly compensated executive at Cigna, where I worked for 15 years, also has Type 1 diabetes. His insulin is covered too because his dad, as you can imagine, has a terrific health plan.

Diabetes in the individual market before ACA

But if, before the ACA, you were not eligible for Medicare or some other government program or weren’t enrolled in an employer-sponsored plan, your situation could have been dire if you’d had a pre-existing condition like Kristin. You’d have to try to find coverage you could afford in the so-called individual market, and you would quickly realize that insurance companies really didn’t want your business.

The individual market back then worked just fine for insurance companies because in most states they could charge just about whatever they wanted. It didn’t work fine at all for a lot of people who needed insurance.

Insurers back then were able to take your health status into consideration when determining what to charge you. And they would charge you a whole lot more if you had a pre-existing condition. Even a condition you’ve had since childhood, like juvenile diabetes.

Insurance company underwriters didn’t care. Not only that, they could declare you “uninsurable” if they wanted to and just refuse to sell you coverage at any price. That was their prerogative. There was no law against it. That’s why many insurance companies – year after year – turned down about one of every three applicants.

They were happy to sell coverage to people they didn’t think would need much medical care but loathe to sell coverage to folks they assumed would be filing more than a few medical claims. You could beg and plead, but it wouldn’t make any difference. You could complain to your congressman or state insurance commissioner, but it wouldn’t do any good. Insurance companies were in complete control.

It gets worse for Kristin Wolf. Not only did she have Type 1 diabetes, but she also had the nerve to be diagnosed with leukemia 15 years ago. It’s amazing she’s still alive when you come to think about it. She probably would be long dead and buried if she hadn’t had a job with medical benefits when she got cancer. Her cancer is not curable but it is manageable, so long as she takes an expensive prescription medication.

But Wolf’s job with benefits didn’t last. She got laid off a few years ago and, consequently, faced the very real and terrifying prospect of also losing her health insurance at the same time. The only thing that saved her was COBRA.

COBRA coverage, as you may know, can be incredibly expensive. I know because one of my kids had to go on COBRA for a few months. COBRA essentially lets you keep your employer sponsored coverage for awhile, but without your employer’s contribution. Under COBRA, you have to pay both your and your former employer’s share of the premium. Not only that, you also have to pay a substantial fee to the company that administers the COBRA benefits.

It’s little wonder that only 10 percent of people eligible for COBRA take advantage of it. It’s just not an affordable option for many middle-income folks. Wolf said she wouldn’t have been able to afford it either if she hadn’t gotten help from her family.

When her COBRA coverage ran out, Wolf couldn’t find an insurance company willing to sell her a policy. She was categorized as “uninsurable.” After all, she had two chronic conditions, Type 1 diabetes and leukemia. So, for a while she had no alternative but to go “bare,” as they say in the insurance industry. That means she was forced into the ranks of the uninsured. She said she had to borrow diabetes supplies from friends. And she had no choice but to stop taking her cancer drugs. See, it’s a wonder she’s still with us and able to tell her story.

Joining the march to defend Obamacare

Wolf’s luck changed for the better when the ACA went into effect. She said she was able to enroll in an Obamacare plan and only had to pay a couple hundred bucks a month because she was eligible for subsidies to help cover the cost of the premiums. Her luck got even better last year when she got hired by a company that offered health insurance.

Now you see why Kristin Wolf decided to join thousands of other folks on the streets of Philadelphia last week. She wanted to let the president and members of Congress know that it is middle-class people like her – people who work hard but sometimes get laid off – who will be hurt if Obamacare goes away. She wanted to be with other folks who know they are alive today because the law doesn’t let insurance companies declare anyone “uninsurable” anymore.

Wolf said she didn’t think people should have to lose their home or life savings when they get sick, and they shouldn’t have to choose between bankruptcy and death.

We’ll have to see if any of the politicians who were in Philly last month feel the same way.