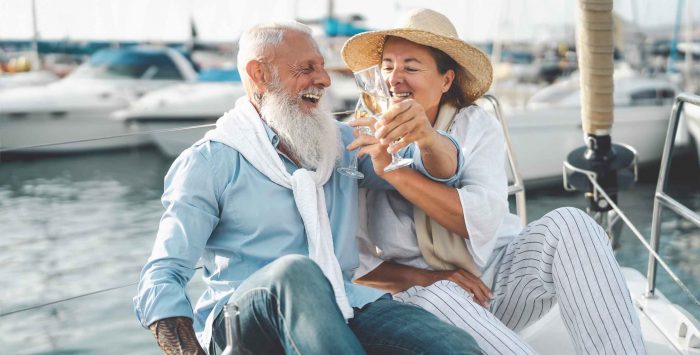 For most Americans, enrolling in Medicare benefits goes along with turning 65 years old. But nearly 10 million Americans under the age of 65 also have Medicare coverage. This is because Medicare eligibility is also triggered once a person has been receiving disability benefits for 24 months, or has kidney failure or ALS.

Medicare beneficiaries can choose to get their coverage through private Medicare Advantage plans, or directly from the federal government via Original Medicare.

Between late 2019 and early 2022, Humana saw a 116%% increase in Medicare Advantage enrollment in Georgia. With 254,305 Georgia residents enrolled in its MA plans in February 2022, the carrier had the highest market share – 32% – out of a field of 19 carriers selling MA plans. 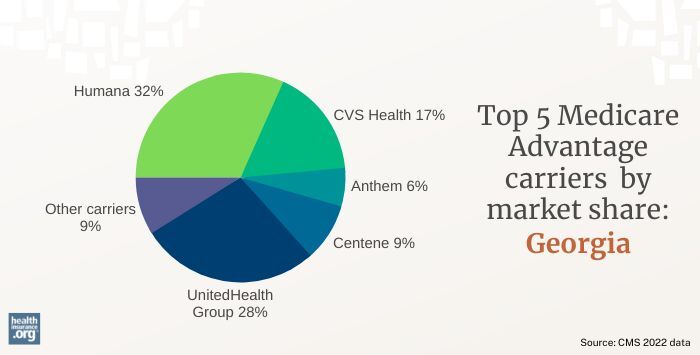 There are three ways Medigap insurers can set their premiums: Issue-age rating means that premiums are based on the age the person was when they enrolled in the plan, so a person who enrolls at age 65 will always pay a lower premium than a person who enrolls at age 80 (rates can still increase overall, but not based on a particular enrollee’s increasing age). Attained-age rating is the approach that most insurers use nationwide (except where prohibited), and it allows the insurer to increase premiums based on the enrollee’s current age, so rates go up as a person ages. Community rating means that premiums don’t vary with age, but there are only eight states that require this approach, and insurers rarely use it if not required to do so. In Georgia, issue-age rating is by far the most common approach, although some insurers use attained-age rating. This is the opposite of what we see in most states, where attained-age rating is generally the most common approach unless the state dictates otherwise.

Federal rules require Medigap insurers to offer plans on a guaranteed-issue basis during an enrollee’s open enrollment period, which begins when the person is at least 65 years old and enrolled in Medicare Part B (and Part A; you have to be enrolled in both to obtain Medigap, but some people delay enrollment in Part B if they continue to receive employer-sponsored coverage to supplement Medicare Part A). But despite the fact that nearly 10 million Medicare beneficiaries nationwide are not yet 65 (and are enrolled in Medicare due to a disability) there is no federal requirement that Medigap insurers offer plans to people who are under age 65.

But the majority of the states have addressed this with legislation that ensures at least some access to Medigap plans for people under age 65, and Georgia is among them. In Georgia, Medigap insurers must offer their plans on a guaranteed-issue basis to anyone who enrolls in Medicare Part B, regardless of age (see O.C.G.A. § 33-43-3). This rule took effect in 2011, and Georgia granted a one-time six-month open enrollment period to people who already had Part B; since then, people who enroll in Medicare in Georgia all have the same six-month open enrollment period for Medigap, regardless of their age.

Georgia’s statute clarifies that people under age 65 can be charged higher premiums, but that the premium variation “shall not be excessive, inadequate, or unfairly discriminatory and shall be based on sound actuarial principles and reasonable in relation to the benefits provided.” Even with that parameter, Medigap rates are substantially higher for Georgia residents under the age of 65; rate filings are available in SERFF and on Medicare’s plan finder tool. Most Georgia Medigap insurers are charging under-65 enrollees between three and ten times as much as they charge enrollees who are 65.

This is because disabled Medicare beneficiaries have costs that are much higher than the average costs for Medicare beneficiaries who are eligible due to age. For example, Blue Cross Blue Shield of Georgia (BCBSGA) filed an average 2019 Medigap rate of about $608/month for disabled (under-65) Medicare beneficiaries, and an average rate of about $198/month for non-disabled enrollees (65+). But even with premiums that were more than three times as high, BCBSGA noted in their filing that their loss ratio for the under-65 population was projected to be 136.8% (versus 71.2% for the pool of non-disabled beneficiaries). Loss ratio reflects the percentage of premiums that the insurer is spending on medical claims; for disabled beneficiaries in Georgia, BCBSGA projected that they would spend 137% of their premium revenue on claims costs.

Disabled Medicare beneficiaries have access to another Medigap open enrollment period when they turn 65. At that point, they can obtain a plan with the standard age-65 rates.

Although the Affordable Care Act eliminated pre-existing condition exclusions in most of the private health insurance market, those rules don’t apply to Medigap plans. Medigap insurers can impose a pre-existing condition waiting period of up to six months if an individual didn’t have at least six months of continuous coverage prior to your enrollment (although many of them choose not to do so). And if you apply for a Medigap plan after your initial enrollment window closes (assuming you aren’t eligible for one of the limited guaranteed-issue rights), the Medigap insurer can consider your medical history in determining whether to accept your application, and at what premium.

You can sign up for a PDP or MAPD (or change to a different one) during the annual enrollment period that runs from October 15 to December 7 each year, with the new coverage effective January 1 of the coming year.

There are 23 stand-alone Medicare Part D plans for sale in Georgia in 2022, with premiums that range from about $7 to $104/month.

As of late 2021, there were 552,959 Georgia residents with stand-alone Medicare Part D plans. That was down from more than 626,000 in late 2018. But during the same period, enrollment in Medicare Advantage plans with integrated Part D coverage had grown from about 610,000 people to more than 829,000 people.


How does Medicaid provide financial assistance to Medicare beneficiaries in Georgia?

Our guide to financial assistance for Medicare enrollees in Georgia includes overviews of these programs, including Extra Help, long-term care coverage, and eligibility guidelines for assistance.

Regardless of whether you’re about to submit your Medicare application in Georgia or have been a Medicare beneficiary for many years, you’re likely to have questions from time to time. The Medicare Rights Center website is a nationwide resource for information, with helpful content geared to Medicare beneficiaries, caregivers, and professionals.