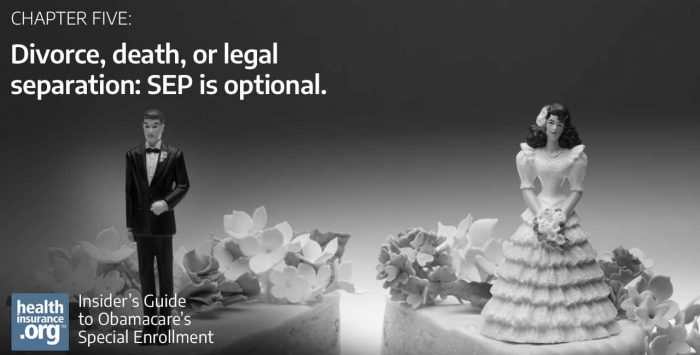 Originally, the plan was that loss of a dependent – or loss of dependent status — due to death, divorce, legal separation, or child support order was to become a qualifying event effective in January 2017 for people who were already enrolled in an exchange plan. But in May 2016, HHS reversed their position on this issue, stating that an SEP based on loss of dependent status or loss of a dependent would remain optional for the exchanges, and exchanges were no longer required to offer this SEP starting in 2017.

And in most states, the exchange has not adopted this SEP. So divorce, death, or legal separation generally doesn’t trigger an SEP unless there’s an associated loss of coverage.

Which exchanges offer an SEP for loss of coverage due to death, divorce or separation?

Prior to 2017, this SEP was already optional for exchanges, and that continues to be the case. HealthCare.gov does not provide a special enrollment period for people who experience death/divorce without loss of coverage. HealthCare.gov’s qualifying event screener for enrollees wishing to change health insurance plans notes that death or divorce/separation that does not result in a loss of coverage does not trigger a special enrollment period.

But it’s important to note that it’s common for people in these situations to simultaneously experience another qualifying event that also triggers an SEP, regardless of whether they’re already enrolled in a plan through the exchange.

For example, a person who divorces and subsequently moves to a new location would be eligible for a SEP as a result of the move (assuming different health plans are available in the new area, and assuming the person already had coverage prior to the move). Similarly, a person who is covered as a spouse or dependent on an employer-sponsored plan would lose access to the plan if they got divorced or if the employee were to die. Even if up to 36 months of COBRA were to be available to that person, he or she would also have access to a SEP in the individual market, triggered by the loss of coverage.

In both of those examples, there’s no requirement that the person was already enrolled in a plan through the exchange; those special enrollment periods are more flexible than the one that would have applied to losing a dependent or no longer being considered a dependent.

SEP limited to those already enrolled

For states that choose to offer a SEP triggered by losing a dependent or no longer being considered a dependent as a result of death, divorce, or legal separation, HHS had previously clarified that the special enrollment period would only apply to people who were already enrolled in the exchange plan and whose coverage was impacted due to the death, divorce, or legal separation.

This is in contrast to the special enrollment period triggered by birth, adoption, or marriage (gaining a dependent or gaining dependent status), which applies to the whole family, regardless of whether they were already enrolled in a plan at the time of the birth.

Tip: When reading through the official regulations on special enrollment periods, you’ll notice that in some cases, the authors use the term “qualified individual” while in others they use “enrollee.” If they say “enrollee,” it means individuals had to already have a plan through the exchange in order for the SEP to apply. If they say “qualified individual,” it means the SEP is available to people who were not already enrolled in a QHP at the time of the qualifying event.

But keep in mind that if the death, divorce, or separation results in a loss of coverage, that SEP applies both on- and off-exchange, and it applies regardless of where the person had obtained their prior coverage (eg, if a person is losing access to a soon-to-be ex-spouse’s employer-sponsored health plan due to a divorce, the person would be able to obtain coverage in the exchange or outside the exchange during the loss-of-coverage SEP).

If states choose to offer this SEP, here’s how it works:

In the case of death of an enrollee or dependent, the remaining enrollees on the QHP have 60 days from the date of death to enroll in a different plan. Coverage will be effective the first of the month following the new plan selection, or the first of the second following month, depending on the state and the effective date rules/deadlines that it uses (keeping in mind that this SEP is not available in any states that use HealthCare.gov unless the death or divorce result in a loss of coverage, and the majority of the states use HealthCare.gov as their exchange).

In states that opt to implement a SEP triggered by loss of a dependent or loss of dependent status, the SEP is only applicable for people who are already enrolled in plans through the exchange, so it doesn’t apply to plans purchased outside the exchange, or to people who are uninsured at the time of the death/divorce/separation.