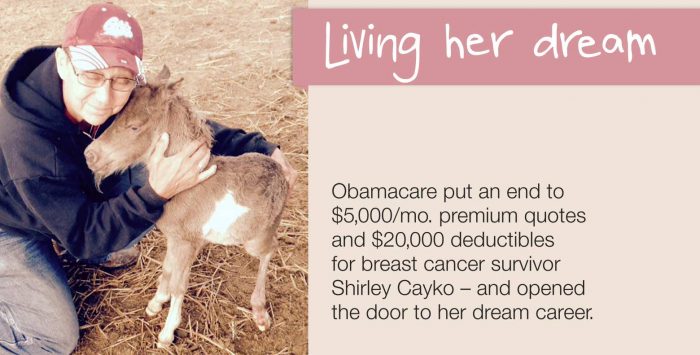 The last decade hasn’t been easy for Shirley Cayko. She’s survived breast cancer, was laid off work, and struggled to pay down her student debt because of the cost of having to buy her own health insurance before the Affordable Care Act (ACA).

But today, she’s living her dream of running her own mental health practice – something she couldn’t have done if it wasn’t for the ACA, or Obamacare.

“My dream has always been to be in private practice, and that wouldn’t be possible without the ACA,” says Cayko, a 61-year-old licensed clinical social worker (LCSW) in Great Falls, Montana. “With the ACA, there was hope my dreams could be fulfilled.”

The specter of financial disaster

Denial of coverage because of pre-existing conditions had been a “black umbrella” over her dreams for many years, Cayko says. During the 1980s, she was denied coverage because of her history of depression and post-traumatic stress disorder. Still, she persevered. She went back to school to earn her bachelor’s degree and eventually graduated with a master’s degree in Social Work in 2003.

In 2005, Cayko was diagnosed with breast cancer. The only silver lining was the fact that she had insurance at the time, through the mental health center where she worked.

“I never knew what happiness was until I survived cancer,” Cayko says.

After her treatment, she was more determined than ever to pursue her dream. Cayko earned her LCSW certification in 2007, hoping at that point to go into private practice. But she decided against it because she was quoted health insurance premiums of $5,000 a month with a $20,000 deductible. So she stayed put until 2013, when her job ended.

With $25,000 in student debt and no job, Cayko ate up most of her savings keeping up with her monthly COBRA payments of $608. Fortunately, the launch of the Obamacare insurance marketplace was just around the corner, bringing with it an end to discrimination against people with pre-existing conditions and help paying for coverage.

Tax credits are a saving grace

“I’d checked into potential options available through the ACA and was anticipating the roll-out,” she says. “I just had to hold my breath and wait.”

With the help of tax credits, Cayko was able to sign up for an affordable plan – in 2015, it cost her $257 a month with a $1,500 deductible – that covered everything she needs to manage multiple chronic conditions. This includes high blood pressure, osteoporosis and atrial fibrillation, a serious but manageable heart condition that was diagnosed in 2014.

“Without health insurance, I wouldn’t be able to get healthcare and wouldn’t be treated,” says Cayko, whose atrial fibrillation puts her at an increased risk of stroke and other complications. “I would probably die if I didn’t get coverage. It’s a matter of life and death.”

Just the diagnosis and treatment of her atrial fibrillation alone would have cost her $100,000 if she’d had to pay for it without insurance, she estimates – a nearly impossible task for someone in the midst of setting up her own business.

“I never would have gotten through this period without the ACA,” Cayko says. “I wouldn’t have been able to work.”

In 2014, Cayko’s dream became a reality when she opened her private practice. She’s building up her clientele, and starting to earn enough to chip away at the debt that piled up between student loans and out-of-pocket healthcare costs.

Although she likes her current insurance plan, especially its wide network of providers, Cayko’s insurance company is discontinuing it for 2016. “I won’t automatically enroll in the plan they’re is offering me as a replacement,” she says. “My partner and I are both shopping around to find the plans that work best for us.”

Cayko is grateful that Obamacare gave her the freedom to pursue her career in private practice, instead of having to work for someone else just to get insurance – or quit working and go on disability, as many people urged her to at one point or another.

“I don’t want to be on disability – I want to keep working,” she says. “I wouldn’t be helping others and I wouldn’t be happy. If a person has a purpose in life, they have a better quality of life.”

In addition to her private practice, Cayko volunteers in the community, including serving on the Board at a local LGBTQ center.

“I’m glad to do what I can to help, which I wouldn’t have the energy to do if I wasn’t getting the care I need,” she says. “My dream is coming true, and it wouldn’t be possible without the ACA.”

Thanks to Families USA for bringing Shirley Cayko’s story to our attention. We’d love to hear your Obamacare success stories and invite you to send them to us.