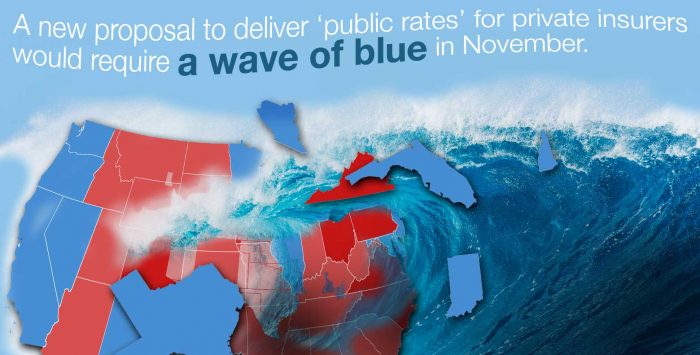 The fourth open enrollment season for the ACA marketplace, kicking off on November 1, is emerging as a shakeout season. Major insurers are cutting back their participation, and premiums are rising sharply. Many insurers assert that they are paying out far more in medical claims than they anticipated; an industry study by McKinsey and Co. found that 70 percent of insurers participating in the marketplace lost money in 2014, with performance likely worsening in subsequent years.

Marketplace enrollment in 2016 is about half what the Congressional Budget Office forecast, and enrollees have proved to be older and sicker than most insurers anticipated. Too many of the uninsured still don’t know about the subsidies on offer, and too many who do know still find the offerings too expensive.

As policymakers look for fixes, the so-called “public option” – a government-run health plan competing with private plans in the marketplace – has re-entered the conversation. Heavily debated while the ACA was being drafted in Congress, the public option was dropped late in the process at the behest of the most conservative Democratic senators, all of whose votes were needed to overcome a Republican filibuster of the legislation.

For its progressive proponents, the public option always had a kind of dual charter: it would keep private insurers honest, or it would squeeze them out entirely. Its primary advantage over private plans would be to pay hospitals and doctors at Medicare rates, or something close to them. Private insurers usually pay more – often much more. That compels them to charge higher premiums, and raises out-of-pocket costs for plan members.

For more business-friendly public option proponents, the hope was that Medicare-range payment rates would effectively become the norm in the marketplace. The public option would implicitly license private insurers to pay comparable rates – as they would tell providers, “we can’t compete if we pay you more than the PO.”

Getting public rates for private insurers

Are there other means to establish “government rates” as a marketplace norm? Jon Kingsdale, a health insurance industry veteran who was the founding executive director of the Massachusetts health insurance marketplace launched under Governor Mitt Romney – the precursor of the ACA marketplace – has floated a proposal that he believes might accomplish substantially the same end.

Kingsdale proposes to adapt to the ACA marketplace a provision that helps control costs in Medicare Advantage plans, the private-market alternative to “traditional” Medicare. The new rule or law would require healthcare providers who accept Medicare rates for Medicare patients – i.e., almost all providers – to do the same for marketplace enrollees who obtain care outside their insurer’s provider network.

In a limited form, such a provision would provide balance billing protection only to patients who obtain emergency room care, or who are confronted with “surprise” bills by out-of-network providers who participate in their treatment at an in-network facility – for example, when an out-of-network anesthesiologist attends an operation arranged with an in-network surgeon. In a more expansive version, affording more leverage to insurers, it would apply in any case when the insurer approves out-of-network care – for example, at a specialty hospital offering a complex service not available in-network.

In addition to providing strong balance billing protection, Kingsdale told me, “the rule would create a BATNA – a Best Alternative to a Negotiated Agreement – for everybody. That is, the Medicare rate. That’s the best a provider can do by refusing to sign up with an insurer, and the best the health plan can do by refusing to sign providers up – which means that the agreements are going to be negotiated based on something like those rates.”

In fact, low rates paid to providers would not be a novelty in the ACA marketplace. Some insurers have made profits in the marketplace, and the most prominent among them have been those whose primary business is Medicaid managed care. These cut-rate insurers are probably paying providers well below Medicare rates. They are underselling larger rivals, gaining outsized market share in many regions in which they compete – and they are profitable. But their networks are narrow – like Medicaid networks. Competitors that started with larger networks are perforce imitating them. Preferred Provider Organizations (PPOs), which provide enrollees with a wide choice of doctors and hospitals, are disappearing from the marketplace.

Kingsdale argues that a mandatory Medicare rate for out-of-network care would broaden the provider networks available at reasonable cost in the marketplace. “There would be broader networks than we currently see because the financial advantage to the plan of channeling business to a few select providers in order to get more competitive payment rates would not obtain.”

Doctors and hospitals would doubtless strongly object to Kingsdale proposal, which reduces their leverage in their perpetual tug-of-war with insurers over payment rates. In recent years, several states have passed a variety of protections against balance billing. Last November,, the National Association of Insurance Commissioners (NAIC) adopted a “model act” for states that requires would-be balance billers go to mediation if they don’t want to accept either the insurer’s in-network rate or Medicare plus a certain percentage, to be filled in by individual states. That rule was protested by the American Medical Association, which wanted a more physician-friendly “default” rate prior to mediation. More fiercely opposed was the American College of Emergency Physicians, who protested that ER doctors provide “more uncompensated care than any other physician specialty” and are relentlessly squeezed by insurers.

Timothy Jost, a law professor at Washington & Lee University and a consumer representative to the NAIC, doubts that the Center for Medicare and Medicaid Studies (CMS), which regulates the ACA marketplace, has the authority on its own to impose Kingsdale’s proposed out-of-network rule. “CMS has been timid in addressing balance billing, and I don’t see any authority for them to control provider rates,” he says.

Sabrina Corlette, a professor at Georgetown University’s Health Policy Center, is emphatic when asked whether CMS could implement Kingsdale’s rule on its own. “Even if they could do it administratively, given the micromanagement of Medicare by Congress, I can’t imagine CMS doing it without congressional sanction. Plus, the AMA and the provider community would go absolutely ballistic.”

What about legislation to implement Kingsdale’s rule? “Congress could of course do that,” Jost says. But he finds it hard to imagine a political world in which a U.S. Congress would consider it. As a sort of outer bound of the politically possible in the U.S., Jost points to a balance billing protection law just passed in California, which sets a baseline for out-of-network payment as the greater of the insurer’s in-network rate or 125 percent of Medicare. That’s a long way from establishing Medicare rates as a payment norm in the ACA marketplace.

On the merits, though, Jost agrees that “if you required providers to accept Medicare rates for out-of-network service they would have no reason not contract with insurers” at roughly those rates. And he believes that “not only slowing the increase of provider prices but driving them back down again is essential” to getting U.S. healthcare costs under control.

Corlette and her Georgetown colleague Jack Hoadley recently published a widely cited report laying out Lessons from Medicare as a source of strategies to stabilize the ACA marketplace. That reports notes that when Congress changed the rules for the plans it renamed Medicare Advantage in 2003, the program was hurting as badly as the ACA marketplace is now. Hoadley points out that when Congress added the balance billing rules at that time, the goal was to enable insurers to form PPOs as an alternative to more restrictive HMOs by increasing insurers’ leverage to create robust networks. That’s similar to what Kingsdale is proposing to do in the ACA marketplace.

The political environment was very different, though. In 2003, Republicans, eager to shore up Medicare Advantage as a private-market alternative to traditional Medicare, showered the program with largess, raising payment rates, and providing the balance billing mechanism that keeps provider payment rates closely tied to Medicare’s. Today, with the entire Republican party sworn blood enemies of the ACA marketplace, legislative fixes seem beyond reach.

Kingsdale’s proposal is imaginable in a world in which Democrats have retaken control of Congress and are once more debating the public option. At that point, as in 2009, pressure from providers, insurers and the more conservative Democrats whose votes will doubtless be needed will once again make that progressive’s grail a very heavy lift. At that point, a rule change that might have a comparable effect (as proponents would argue) might seem an acceptable compromise. But probably not before.