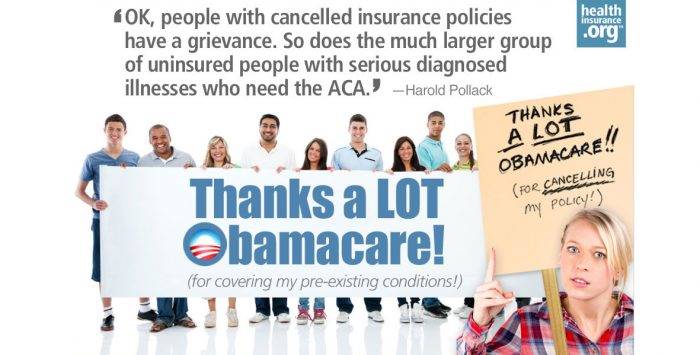 President Obama told Americans: “If you like your insurance, you can keep it.” That statement was correct for the vast majority of Americans who receive coverage through their employers, Medicare, or Medicaid. Yet it oversimplified the likely changes to the individual and small-group market.

The President was right to apologize for this unequivocal statement. When you combine that reality with the botched rollout of HealthCare.gov, the result is a political firestorm. Still, much of the harsh criticism seems disproportionate, or at least selective in its indignation.

As Jonathan Cohn reports, the number of people left worse off by ACA is surely overstated. Many anecdotes are misreported. Many supposed horror stories turn out to be simply wrong. Many people who are having policies cancelled can obtain better coverage on the new health insurance exchanges.

Others are eligible for Medicaid or for premium subsidies. Many policies being cancelled wouldn’t actually protect you if you got sick. Others provide good coverage right now, but no one can count on these policies for more than a few years. Other people obtained cheap insurance because they are relatively healthy and are eligible to buy plans that discriminate against people with preexisting conditions.  Sound social and regulatory policies would reform such plans, even if it means that some healthy and affluent people are required to pay more.

Who feels worse off?

The winners will outnumber the losers within insurance markets as a result of health reform. No one knows how many people will be worse off. MIT economist Jon Gruber guesstimates there are about 4.4 million Americans who will receive cancellation notices, and whose incomes are too high to receive subsidies through the new exchanges. Maybe half of this group will have grounds to believe that they were tangibly made worse off.

2.2 million is a large number, about one percent of the adult population. Of course, this group isn’t randomly drawn from the U.S. population. These are reasonably well-off people who are especially aggrieved because they are losing something they believed they had before health reform: Good coverage. Austin Frakt, Ezra Klein, and Evan Soltas note the political potency of this combination: identifiable people with resources who experience a tangible loss relative to the status quo.

Hence the lack of perspective when we consider the mix of winners and losers from health reform. Before ACA was passed, about 50 million people lacked health coverage. They were part of an unacceptable status quo, but one whose worst harms were inflicted on disorganized, low-income, and politically marginal people, and thus most readily ignored.

About 5 million uninsured poor people have had their coverage snatched away by a Supreme Court majority that made ACA’s Medicaid expansion optional, and by Republican governors who then rejected this expansion. This may be the most poignant failure of health reform.

Then there are the people among the 50 million uninsured who face particular health needs. Although Republicans deployed the slogan “repeal and replace,” every politically operative Republican proposal analyzed by nonpartisan scorekeepers would have left virtually that entire group of 50 million uninsured. Some proposals included provisions for high-risk pools to address severe medical needs. Yet these proposals failed to include the expenditures required meet these needs.

10.3 million with a huge stake in reform

I recently examined data from the 2011-2012 wave of the National Health and Nutrition Examination Survey (NHANES). This is a sophisticated, nationally representative survey that captures detailed health status and insurance information for nearly 10,000 people across the country. As these data make plain, many millions of uninsured people face significant medical (and thus financial) need.

If one widens the net to include burdensome but less severe current conditions such as chronic bronchitis, active asthma, liver, and thyroid conditions, roughly 10.3 million people are uninsured and face significant physical health issues.

NHANES is not a great dataset to capture psychiatric disorders. Data from other sources indicate that about 4.8 million uninsured people satisfy screening criteria for substance use disorders. Millions more experience major depression or related disorders. Of course I also haven’t addressed significant issues of under-insurance that are such a specific focus of the Affordable Care Act. You get the picture.

It’s proper for ACA’s critics to ask why the President didn’t prepare the public more transparently for these changes in the individual and small-group insurance market.

But it’s equally fair to ask politicians who oppose health reform to explain why they wax so indignantly regarding the transitional difficulties facing one group, yet prove so conspicuously unwilling to specify how they would help the far larger groups of people within the ranks of the uninsured who face serious needs.

The Affordable Care Act, whatever its specific unpopular provisions or imperfections, is a real law which is helping millions of real people. Until its critics offer credible specific alternatives subject to independent evaluation, their indignation regarding cancelled policies will be hard to credit.

Postscript: Reihan Salam reminds me over Twitter that ACA will not achieve universal coverage. Depending upon governors’ decisions on Medicaid expansion, implementation of the individual mandate, and immigration policy, we can expect at least 25 million Americans to remain uncovered.

That’s a huge achievement, but we still have work to do to ensure that these 5.7 million people (and others) achieve basic security. I’ll investigate what can be said about post-ACA prevalence of uninsurance among those with serious illnesses. I’ll add a link.