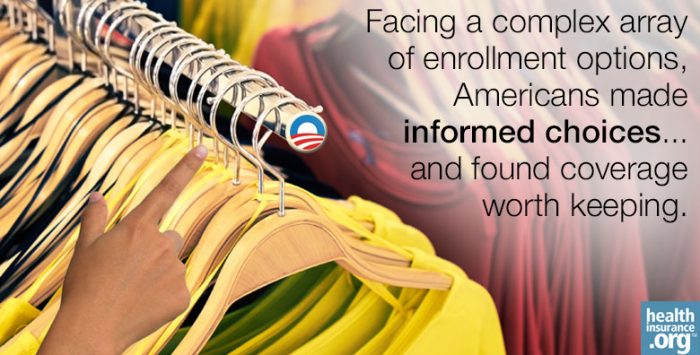 Shopping for a health insurance plan is hard. Too many of those who visited HealthCare.gov or their home state’s exchange but remained uninsured may not have realized that they were eligible for subsidies or Medicaid. Among those who did enroll in qualified health plans (QHPs) on ACA exchanges, however, evidence is mounting that most made informed choices and were reasonably satisfied.

Here’s three facts about the market that indicate as much:

Yesterday, the Department of Health and Human Services released some fresh snapshots of buyer behavior on HealthCare.gov, the federal exchange serving 37 states. Of the 4.2 million QHP buyers in the first open season who renewed coverage for 2015, 53 percent shopped anew rather than opting for the default “auto-renewal” in the plan that covered them in 2014. Of the 2.2 million who checked out their options afresh, a bit more than half, 1.2 million, chose new plans. The Huffington Post’s Jonathan Cohn explains the main reason this is important:

While it’s impossible to know (at least from these data) exactly why people switched plans, price was likely a big factor. With new insurers entering the market and others adjusting premiums based on their data from last year’s business, lots of Obamacare consumers had opportunities to save money. But many had to change policies in order to realize those savings. In some cases, those who stuck with the same plans were subject to significantly higher costs because – under the formula the government uses to calculate Obamacare’s tax credits – the level of available financial assistance declines when cheaper plans become available in a particular location.

That is, if the “benchmark” Silver plan that the government uses to calculate premium subsidies was lower in a given region this year than last, the subsidy amount in that region went down. If the price of the buyer’s current plan in turn went up, that was a double whammy – lower subsidy, higher premium.

HHS recognized this problem last fall, when prices for 2015 plans were announced and showed lower average increases than expected, but also more volatility. (Some plan prices up, some down, with lots of new entries.) HealthCare.gov began bombarding existing customers with messages to comparison-shop before renewing. A week before open enrollment began, HealthCare.gov launched, and placed prominently on the home page, a revamped “shop-around” feature that made it easy to answer a handful of questions and get price quotes for all available plans within a minute of logging on. Whether or not these efforts were a primary cause, more existing customers than expected did end up “actively” renewing coverage.

On the eve of the Affordable Care Act’s just-finished second open enrollment period, November 15, about 4.5 million QHP holders were enrolled via HealthCare.gov, according to ACA numbers guru Charles Gaba. That was down from 5.4 million enrollees at the end of the first open season last April, some of whom never paid a premium, and some of whom dropped QHP coverage between April and November.

Of those 4.5 million who were enrolled via HealthCare.gov as of Nov. 15, about 4.2 million re-enrolled or selected a new plan on the exchange. That means that about 77 percent of HealthCare.gov’s original customers remain enrolled in a QHP.

To put those numbers in perspective, it’s important to keep in mind that Americans’ health insurance status is in constant flux. The majority of adults under age 65 get insurance through their employers; every month, many lose coverage and many gain it. Here’s a snapshot of the pre-ACA situation from healthcare scholars Rick Curtis and John Graves:

Those who bought plans on the ACA exchanges (87 percent of whom obtained government subsidies) may have come disproportionately from the ranks of the long-term uninsured and so may remain in private coverage for longer periods than those who bought coverage in the pre-ACA market (or buy it now off the ACA exchanges). But the relatively high retention rate in the ACA marketplace indicates reasonable levels of satisfaction and affordability, not to say need.

For QHP buyers with household incomes below 200 percent of the federal poverty level (FPL) the ACA offers cost-sharing reduction (CSR) subsidies that dramatically reduce deductibles, co-payments and maximum yearly out-of-pocket costs. (Much weaker CSR is available for those with incomes from 200-250 percent FPL.) CSR is available only with Silver-level plans, however.

For CSR-eligible customers, buying Silver was not necessarily an intuitive or easy decision, as the premiums could be much steeper than for Bronze. The price spread between the cheapest Silver and cheapest Bronze plan varies widely by location and buyers’ ages, but it was rarely less than $30 and sometimes more than $100 per person per month. But Bronze plans carry average per-person deductibles over $5,000, often offering little more than catastrophic coverage; they are designed to cover just 60 percent of the average user’s yearly out-of-pocket costs.

The best evidence indicates that more than 85 percent of buyers under 200 percent FPL selected Silver plans; on HealthCare.gov, the percentage was probably closer to 90 percent. At 201 percent FPL, where CSR becomes almost negligible, Silver plan selection falls off a cliff.

Rational choice in the ACA marketplace

Many healthcare professionals and scholar worry that a market providing choice from a large selection of private health plans with a complex array of features and coverage rules offers too much complexity for typical buyers, most of whom are on the lower end of the income scale.

That may well be true for many, and the marketplace has a long way to go on the transparency front – for example, making clear exactly what doctors and hospitals are in each network, or what drugs are covered (this information is provided, but is often out of date and can be difficult to access). But the facts noted above provide some evidence that most buyers are making rational decisions and finding coverage worth keeping.