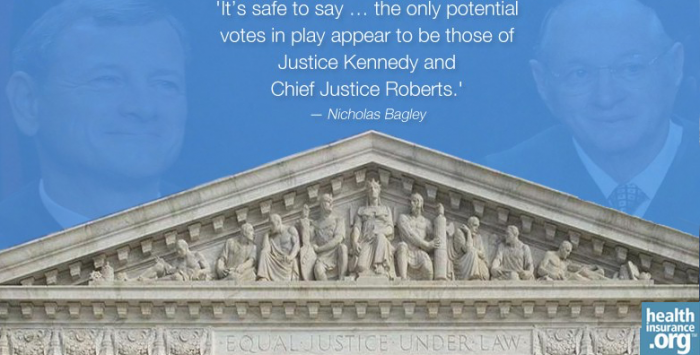 This morning, the Supreme Court heard oral arguments in King v. Burwell, the lawsuit that claims that the Affordable Care Act only allows health insurance exchanges “established by a state” to credit premium subsidies to qualifying buyers of private health insurance plans. According to the plaintiffs, the law did not authorize the federal exchange, now known as HealthCare.gov, to credit those subsidies.

Since 37 states currently rely on HealthCare.gov, a finding for the plaintiffs would cut off subsidies and so render coverage unaffordable to the majority of current holders of health plans purchased on the exchanges. An estimated 7 million people would lose their subsidies, and so probably their coverage, if the Court agrees with the King plaintiffs.

What did the oral arguments tell us about how the judges may rule? I asked Nicholas Bagley, a health law scholar at the University of Michigan and a close student of the King lawsuit who has become one of the most widely quoted experts on the legal issues it raises.

Bagley is coauthor of two amicus briefs filed in support of the government in King. The core argument in one of those briefs addressed a focal point of today’s oral argument. That brief, co-written with Bagley’s fellow law professors Abbe Gluck, Thomas Merrill, and Gillian Metzger, argues that the part of the ACA that establishes the state exchanges and the “backup” federal exchange is not structured like the many laws that impose conditions on states that fail to take specific action.

Such “conditional” grants clearly spell out the consequences of state inaction. The ACA provision establishing the federal exchange does not do this; it rather follows the form of a “cooperative regulatory scheme” in which the federal government simply acts for the state if the state declines to act on its own.

An edited transcript of our conversation follows.

Andrew Sprung: What did we learn from today’s oral argument?

Nicholas Bagley: We learned a few things but not much more than we knew already.

It’s safe to say after the oral argument that the only potential votes in play appear to be those of Justice Kennedy and Chief Justice Roberts. The Chief was more or less silent which doesn’t give much insight into how he’s thinking about the case. It wouldn’t be unreasonable for him simply to watch the fireworks knowing that his concerns would be thoroughly ventilated by his colleagues, as I think they were.

Justice Kennedy was more interesting because he clearly had a view about serious federalism concerns that would be raised by accepting the plaintiffs’ interpretation. [That is, their claim that states would forfeit premium subsidies if they did not establish their own exchange might suggest that the law unconstitutionally coerced the states into forming their own exchanges.] But he also left room for himself to say that the statute is unambiguous and thus there’s no room to avoid those federalism concerns [that is, even if the law is potentially unconstitutional, it may be unambiguously written that way.] I read him too as being at least somewhat equivocal.

Sprung: What about Justice Kennedy’s other moment in which he voiced arguments put forward by the plaintiffs – to the effect that if the statute is ambiguous, the IRS might not have the authority to resolve the ambiguity?

Bagley: That Chevron point should be getting more attention. [Chevron is a case in which the Supreme Court held that if a statute’s language is ambiguous, courts should defer to the agency charged with resolving the ambiguity.] The upshot of that argument is that the question of whether the federal exchange is authorized to credit subsidies to qualified buyers of private plans is too important to leave to the IRS – we shouldn’t lightly assume that Congress delegated the authority to the IRS to resolve that ambiguity. That’s especially so, he said, in the context of tax credits, which are a kind of exemption from taxation. There’s a canon of statutory interpretation suggesting that exemption from taxation ought to be construed narrowly.

Justice Kennedy was picking up on those arguments in the petitioners’ brief, I filed an amicus on behalf of the government that disputes all those points But if you buy those arguments you’d be skeptical of the claim that Congress meant to give the IRS the authority to craft the rule. I don’t think those arguments are convincing or that they will carry the day.

Sprung: What about Solicitor General Verrilli’s response – that a specific section of the ACA’s amendment of the tax code [Section 36b (g)] gives the IRS explicit authority to make any decisions necessary to implement the tax credits?

Bagley: It was an important response. It’s one that the government made in its brief and that Justice Kennedy is surely aware of. Look, I find that argument convincing – I submitted a brief endorsing it. Whether Justice Kennedy buys it is very hard to say from the transcript.

All of this is as much to say: don’t make too much of individual statements in oral argument. Yes, he expressed some skepticism about the federalism argument, but Justice Kennedy is always going to signal that he takes both sides seriously. You can’t read too much into any question he asks, whether of the government or of the plaintiff’s attorneys.

What to make of Roberts’ joke

Sprung: What about one of the few points where Roberts did speak – where he seemed to catch out attorney Michael Carvin, arguing for the plaintiffs? [ed note: Justice Ginsburg challenged Carvin’s claim that the federal exchange could function without crediting premium subsidies, claiming that back in 2012, Carvin, arguing before the Supreme Court that the whole ACA should be struck down if the individual mandate were found unconstitutional, asserted that the exchanges could not function without the subsidies. Justice Roberts chimed in that since Carvin lost the 2012 case, “maybe it makes sense that you have a different story today.”]

Bagley: It’s hard to know what to make of that. On the one hand, it was a lighthearted crack, he was just making a joke. On the other hand I think he was maybe signaling to his colleagues not to make too much of arguments made by a lawyer zealously defending his client’s interests. The fact that a lawyer made one argument that’s inaccurate and is asked in a future case to make a different argument shouldn’t independently cut against him. a change in argument from an advocate zealously arguing his case. I don’t think the “gotcha” is going to weigh heavily on the Court.

Sprung: Were there any noticeable weak points in either of the attorneys’ performances?

I think Verrilli handled the Court’s questioning somewhat better. Carvin at one point claimed that there’s absolutely no evidence that there would be any adverse effects associated with the elimination of the tax credits. And I think that’s just irresponsible, and the Court knows that. But these are I think minor points.

Sprung: Were the any surprises for you? Did you learn anything?

Bagley: The only big surprise was seeing Justice Alito being mildly open at least to the possibility of a entering a stay [a delay before the federal government must stop paying tax credits to those who bought plans on HealthCare.gov]. I’d be surprised if Justice Scalia were willing to along with that, but he might be.

Sprung: Did the hearing open up the possibility of a ruling that would neither simply disallow the credits through the federal exchange nor wholly uphold the government? Any possibility of measures (other than a stay) other than thumbs-up or thumbs-down?

Sprung: So what is the final takeaway?

Bagley: Two justices came in with question marks over their heads. I don’t think we learned much from either about how they’re thinking about the case. So, although it’s interesting and it sounds like the Court understands the case and is grappling with it seriously, I don’t know that we learned a great deal.