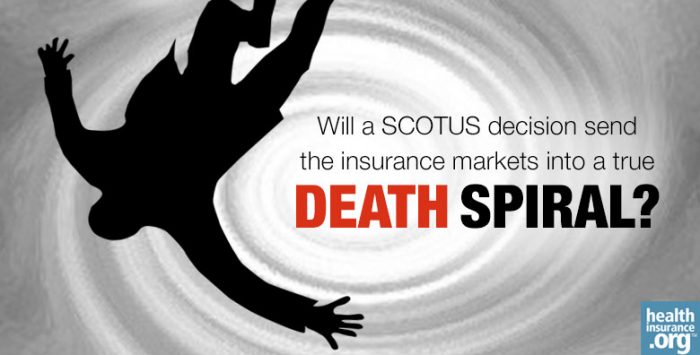 I mentioned in my last post that a Supreme Court decision in favor of the plaintiffs in King v. Burwell would likely lead to a collapse of the health insurance market in more than two-thirds of the states. History bears this out.

In the years before the Affordable Care Act was passed, several states tried to bring an end to some of the health insurance industry’s anti-consumer practices, most notably insurers’ unwillingness to sell coverage to a large percentage of the population because of preexisting conditions.

In my home state of Tennessee, Blue Cross Blue Shield of Tennessee turned thumbs down on one of every three applicants, according to published reports, primarily because those folks had been sick in the past or had developed a condition that might result in high medical bills sometime in the future.

Tennessee was not alone. In fact, before the Affordable Care Act, insurers in every state were once able to refuse to sell policies to people that their actuaries considered “uninsurable.”

Another state I used to call home is Kentucky, where one of the country’s largest health insurers, Humana Inc., is based (and where I used to work). In 1994, Kentucky’s lawmaker decided it was time to make it illegal for an insurer to turn down any applicant because of health status. So they passed legislation that mandated what is known in the industry as “guaranteed issue” and “modified community rating.”

As a consequence, every one of the more than 40 health insurers that did business in the state had to offer coverage to every applicant, and they were restricted in how much they could vary premiums based on an individual’s age, gender, health status or occupation. They were not able to charge women more than men, for example, or to charge older people a lot more than younger people for the exact same policy.

Sounds fair, right? Well, the problem was that the lawmakers decided not to pass a bill insurers lobbied for that would have required residents of the state to buy coverage, as the Affordable Care Act does. The insurers warned of “adverse selection,” but they were ignored. In retrospect, the lawmakers should have listed to the insurers.

Without a requirement to purchase coverage, many of the youngest and healthiest Kentuckians decided not to enroll in a health plan. They knew that because of the guaranteed issue requirement, they could just wait until they got older and sicker before buying coverage.

What happened in short order was that the pool of customers in Kentucky willing to buy coverage became considerably older and less healthy. Adverse selection did indeed occur. When it happens, insurers have no choice but to raise rates on everyone in the risk pool in order to remain solvent. When they raise rates even more people choose to go uninsured. That eventually causes something that sounds (and is) even more ominous: a death spiral.

Anatomy of an actual death spiral

In a death spiral, the number of young and healthy people in a given market continues to diminish, causing insurers to raise the rates even more. You get the picture. Eventually, the pool of customers willing and able to buy coverage becomes tiny.

When all of this began to happen in Kentucky, all but two of the more than 40 health insurers deserted the market. And the rates being offered by the remaining two were so high, very few of Kentucky’s residents could afford coverage (unless, of course they were fortunate enough to work for an employer that provided subsidized benefits).

Keep in mind that unlike the federal government does under the ACA, Kentucky did not provide any subsidies in the form of tax credits to help people pay their premiums if they had to buy coverage on the state’s individual market. (It is the legality of those subsidies being challenged by the plaintiffs in King v. Burwell.)

Because of adverse selection and the resulting death spiral, Kentucky lawmakers had no choice but to repeal the guaranteed issue legislation. Even with the repeal of that law in 2000, the individual insurance market did not return to its former size, and many of the insurers continue to steer clear of Kentucky.

(To its credit, Kentucky was one of the few states to set up and run its own health insurance exchange. And it’s a good one. It has frequently been cited as one of the best in the country.)

Other states, including Washington and New York, experienced a similar dynamic. In New York, the individual market shrank from 1.2 million to just 31,000 between 1992, when the lawmakers passed a guaranteed issue bill, and 2010.

As America’s Health Insurance Plans, the industry’s largest trade group, noted in the amicus brief it filed in support of the government in the King v. Burwell case, “At that point, the only people who participated in the market were those who were very sick and affluent.”

AHIP warned that eliminating the subsidies for the newly insured in the 34 states that defaulted to the federal government to operate their health insurance exchanges would quickly lead to the collapse of the individual health insurance market in those states just as it did 20 years ago in the states that tried guaranteed issue without an individual mandate.

To explain to the justices how this would affect real people and the states where they live, AHIP used a hypothetical 27-year-old earning $24,000 and living in Florida, one of those 34 states that defaulted to the feds to operate their exchanges, if the Supreme Court rules in favor of the plaintiffs.

Here’s how AHIP explained it:

That individual would be eligible to purchase a bronze-level plan for $90 per month (after a tax credit of $93 per month). On an annualized basis, the individual’s out-of-pocket cost would be $1,080 (12 monthly premium payments of $90) but he or she also would have avoided a shared responsibility payment of $325, which results in an effective economic cost of $755 per year compared to not obtaining health insurance.

If tax credits were unavailable, the same individual would have to pay $183 per month for the same policy and would be exempt from any shared responsibility payment (because the insurance cost would exceed the 8% threshold). Thus, he or she would face a choice between purchasing health insurance and paying a $2,196 annual premium (twelve monthly premium payments of $183) or not purchasing health insurance and paying no penalty.

That same dynamic,” AHIP predicted, “would play out across different age groups, in different states, and in different low- and middle-income brackets. The ACA’s tools for balancing the risk pool would be ineffective, and, would resemble the ‘death spiral’ phenomenon accompanying the failed state reform efforts of the 1990s.

If the justices have time to read only one of the many amicus briefs filed in King v. Burwell, I hope they will read AHIP’s.