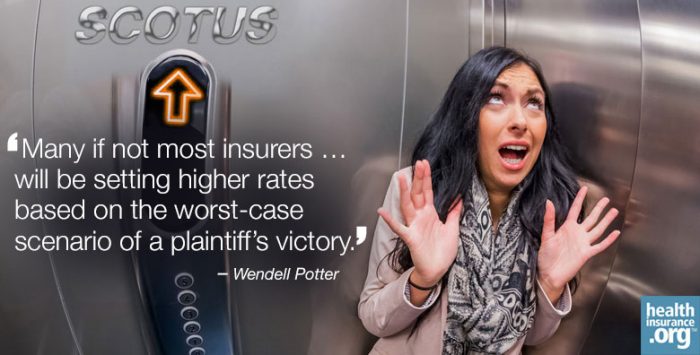 You may have heard that the Supreme Court will be hearing arguments on Wednesday in yet another case challenging the Affordable Care Act.

What you probably have not heard is that regardless of how the Court eventually rules in King v. Burwell, your premiums will likely go up next year simply because the justices agreed to take the case in the first place.

As illogical as that might sound, here’s what’s going on behind the scenes that will make the cost of coverage more expensive in most of the country next year than it would have been if the Court had not taken the case.

But first some background. Although the lead plaintiff in the case is a Virginia man named David King, the money behind the lawsuit is the Competitive Enterprise Institute, a conservative organization that would like to see the ACA abolished one way or another. (The named defendant in the case is Health and Human Services Secretary Sylvia Burwell.)

The plaintiffs argue that because of the way the ACA is worded in a few places, the subsidies the government is providing to residents of all but 16 states are illegal. If the plaintiffs prevail, those subsidies – which make coverage more affordable to millions of low- and moderate-income individuals and families – can no longer be paid unless Congress or the states act promptly to keep them in place.

The people who will be directly affected by the Court’s decision live in the 34 states that defaulted to the federal government to set up and operate their health insurance exchanges.

What the plaintiffs have seized upon is the use of the word “State” in some references to the exchanges in the ACA. In those references the law says that folks who enroll in a health plan “through an Exchange established by the State” are eligible for subsidies in the form of tax credits if they earn less than 400 percent of the federal poverty level.

Members of Congress who drafted the law insist that it was never their intention to limit the subsidies to residents of states that set up their own exchanges. The Obama administration agrees with them. And so have all the federal appellate courts that have ruled on this and similar cases. In fact, when King v. Burwell reached the Fourth Circuit Court of Appeals in Richmond last year, the justices unanimously upheld the government’s position that the subsidies are legal in every state, including the 34 that have what are referred to as Federally Facilitated Exchanges (FFEs).

Nevertheless, the Supreme Court decided to take the case, leading some Court watchers to speculate that at least four of the justices will likely rule in favor of the plaintiffs. Justice Anthony Kennedy and Chief Justice John Roberts are expected to cast the deciding votes.

A shock to the industry’s rate-setting system

The decision by the high court to hear the case has added a level of uncertainty in the health insurance marketplace that the industry’s executives never expected. It has been the equivalent of throwing a huge wrench into the works of their rate-settings operations.

A big part of the problem is the timing of what the Court will ultimately decide to do. Although the nine justices are expected to vote within days of Wednesday’s hearing, the Court’s is not expected to announce its decision until June. That’s just how the high Court does things.

The problem for insurance companies is that by June, many if not most of them will already have told state and federal regulators how much they plan to charge customers for policies they will sell on the exchanges in 2016.

That’s causing a lot of consternation among insurance company actuaries – the people who analyze financial risk – because, if the Court sides with the plaintiffs, a very high percentage of their exchange customers won’t get any more to reduce the cost of their premiums.

And if the government can’t legally continue providing subsidies in those 34 states, the actuaries expect a very high percentage of their youngest and healthiest customers to drop their coverage. The only people who would keep their policies, they believe, would be people who are older and sicker. And those folks are far more likely to need expensive medical care.

If this happens, insurance companies would have no choice but to hike premiums substantially to stay solvent.

America’s Health Insurance Plans, the industry’s biggest trade group, wrote in an amicus brief supporting the Obama administration that “the lack of tax credits in the (34) FEEs (Federally Facilitated Exchanges) would alter the fundamental dynamics of those markets in a manner that would make insurance significantly less affordable even to those who would not rely on the subsidies.”

Will rates be based on worst-case scenario?

What that means is that everyone who buys coverage in the individual market in those 34 states – not just those getting subsidies – may see big spikes in their premiums.

The American Academy of Actuaries has asked the Department of Health and Human Services to allow insurers to submit two sets of rates for 2016: one assuming the subsidies will still be available, and the other assuming they won’t.

Insurers don’t know if the feds will allow them to do that. Meanwhile, they’re having to begin the work of setting rates for next year. Because of all this uncertainty, insurers reportedly are thinking of pricing their policies higher for 2016 than they would if they knew today which way the Court will rule come June. Many if not most insurers – maybe even all of them – will be setting rates based on the worst-case scenario of a plaintiff’s victory.

And those rates will be higher than they would have been if the Court had never agreed to take King v. Burwell.

In my next post, I’ll explain why a Court decision in favor of the plaintiffs would likely lead to a collapse of the individual marketplace most if not all of those 34 states.