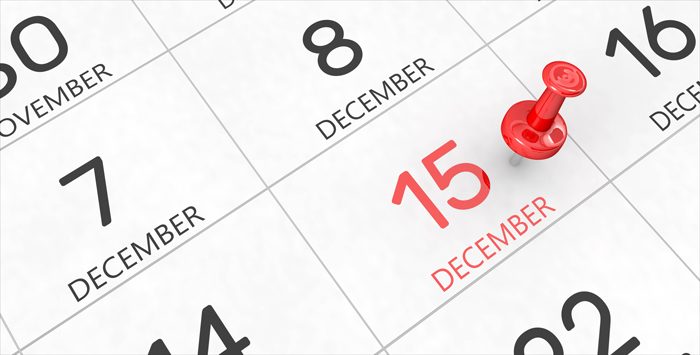 Reasons to enroll in an ACA health plan by December 15?

Open enrollment for 2023 individual/family health coverage began on November 1. The enrollment window continues until at least January 15 in nearly every state. (Idaho will end its open enrollment period on December 15, but Idaho also started early, allowing people to enroll starting in mid-October.)

For several years, open enrollment ended in mid-December So the extended open enrollment period does give people some extra wiggle room during the busy holiday season. But for most people, December 15 is still the soft deadline you’re going to want to keep in mind. In most states, that’s the last day you can enroll in coverage that will take effect January 1. And that’s important for several reasons.

1. Currently uninsured? Delaying your enrollment will mean no coverage in January.

If you’re not already enrolled in ACA-compliant coverage in 2022, the current open enrollment period is your chance to change that for 2023.

But if you wait until the last minute to enroll, you won’t have coverage in place when the new year begins. Instead, you’ll be waiting until at least February 1 for your coverage to begin.

2. Currently uninsured or enrolled in a non-marketplace plan? Delayed enrollment might mean missing out on free money.

If you considered marketplace coverage in the past and found it to be unaffordable, you might currently be uninsured or enrolled in a plan that isn’t regulated by the ACA. Or you might have opted to buy ACA-compliant coverage outside the exchange, if you weren’t eligible for premium tax credits (subsidies) the last time you looked.

But thanks to the American Rescue Plan, many people who weren’t eligible for subsidies in previous years will find that they are now (these subsidy enhancements have been extended through 2025 by the Inflation Reduction Act, so they continue to be available). Those subsidies are only available if you’re enrolled in a marketplace/exchange plan, and the current open enrollment period is your chance to make the switch to a marketplace plan.

In addition to being more widely available, premium subsidies are also larger than they were before the American Rescue Plan. People who didn’t enroll in the past due to the cost may find that coverage now fits in their budget.

Four out of five people shopping for coverage in the 33 states that use the federally-run marketplace (HealthCare.gov) will find that they can get coverage for $10/month or less. And millions of uninsured Americans are eligible for premium-free coverage in the marketplace, but may not realize this.

Waiting until the last minute to enroll in coverage will mean that you leave all that money on the table for January. You can use our subsidy calculator to get an idea of how much your subsidy will be for 2023. Then, make sure you enroll by December 15 so that you’re eligible to claim the subsidy for all 12 months of the year.

3. Letting your plan auto-renew? You might be in for a surprise.

If you already have coverage through the marketplace in 2022 and are planning to just let it auto-renew for 2023, you might wake up on January 1 with coverage and a premium that aren’t what you expected.

Even if you’re 100% happy with the plan you have now, you owe it to yourself to spend at least a little time checking out the available options before December 15. The premium that your insurer charges is likely changing for 2023. And your subsidy amount might also be changing, especially if there are new insurers joining the marketplace in your area (a lot of states have new insurers for 2023, and there are also some exiting insurers).

Your insurer might also be making changes to your benefits, provider network, or covered drug list — or even discontinuing the plan altogether and replacing it with a new one. In short, the plan and price you have on January 1 might be quite different from what you have now.

This is part of the reason HHS opted to extend the open enrollment period as of 2022 – in order to give people a chance for a “do-over” if their auto-renewed plan isn’t what they expected. In nearly every state, you’ll have until at least January 15 to pick a new plan. But that plan selection won’t be retroactive to January 1 if you enroll in the final few weeks of open enrollment.

What if you’re enrolled in a marketplace plan in 2022, let it auto-renew for 2023, and then decide after December 15 that you’d rather have a different plan? Thanks to the extended open enrollment period, you can do that, and your new plan will take effect in February (or potentially March, if you’re in one of the state-run exchanges with the latest enrollment deadlines).

But it’s important to understand that you’ll be starting over with a new plan in February or March. This means the out-of-pocket costs counted against your deductible and out-of-pocket maximum will reset to $0, even if you ended up with out-of-pocket expenses in January.

Out-of-pocket expenses reset to $0 on January 1 for all marketplace plans, so your auto-renewed policy will start over with a new deductible at that point. But if you need medical care in January (and have associated out-of-pocket costs) before your new plan takes effect in February, you’ll potentially have a higher out-of-pocket exposure for the whole year than you would have if you’d picked your new plan by December 15 and had it start January 1.

All of this is a reminder that while most enrollees have until at least mid-January to sign up for 2023 coverage, it’s in your best interest to get your plan selection sorted out by December 15.