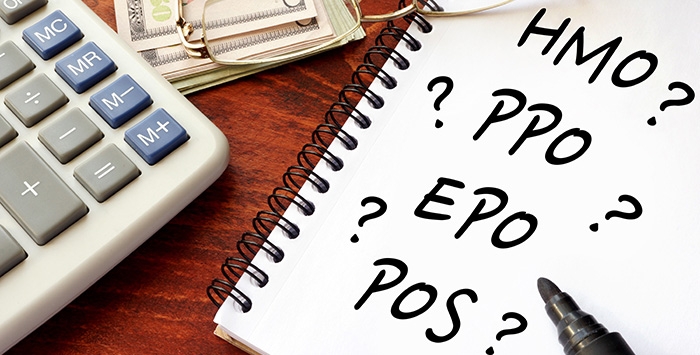 And – regardless of where you shop – you’re going to end up making a decision about a type of managed care that works best for your situation. As you’re selecting a health plan – whether it’s ACA-compliant or not – you’ll notice that the plans are labeled as either an HMO, PPO, EPO, or POS.

(The alternative is an indemnity plan, which doesn’t have a provider network. Indemnity plans are almost unheard of in today’s major medical health insurance market.)

Why do health plans have managed care designations?

Managed care is a medical delivery system that attempts to manage the quality and cost of medical services that individuals receive. Each type of managed care limits, to varying degrees,

What’s the difference between an HMO, PPO, EPO, and POS plan?

To a large degree, the differences involve access to providers. All HMO, PPO, EPO, and POS plans have networks of medical providers (doctors, hospitals, etc.) that have a contract with the health plan in which the carrier agrees to accept a negotiated price for the services they offer. Some plans will only pay for non-emergency care if you receive care from an in-network provider, while other plans may cover some of the bill if you see an out-of-network provider.

You’ll often see simple comparison charts that show the “rules” for the different types of managed care. In a nutshell, they’ll generally say that HMOs and POS plans require a referral from a primary care doctor in order to see a specialist, while PPOs and EPOs do not, and that PPOs and POS plans cover out-of-network care, while HMOs and EPOs do not. They will also often tend to say that HMOs have lower premiums, lower deductibles, and smaller provider networks, while PPOs have higher premiums, higher deductibles, and broader networks.

In reality, the lines tend to be more blurry, and these types of plan management have evolved over time. For example, this POS plan from Blue Cross Blue Shield of North Carolina does not require a referral to see a specialist. Neither do these HMOs from Friday Health plans. And while it’s often true that employer-sponsored HMOs tend to have lower deductibles and premiums and potentially smaller networks, that does not hold true in the individual/family (self-purchased) market.

(The ACA requires health plans to cap out-of-pocket costs for essential health benefits obtained from an in-network provider – the cap is $8,700 this year – but there are no limits on how high out-of-network costs can be, even if the plan provides out-of-network coverage.)

Should you consider managed care designation?

When you’re shopping for a health insurance plan – either through the health insurance marketplace or off-exchange – there are many factors to keep in mind. (This is also true if you’re selecting from among options offered by your employer, although there are likely to be far fewer choices in that case.) We’ve covered some of them here, and also have a detailed summary of things to keep in mind when deciding which metal level is right for you.

So should the HMO, PPO, EPO, or POS designation matter when you’re selecting a plan? Maybe, but it’ll depend on the specifics of the plans that are available to you and the coverage details that are important to you.

In general, you’ll want to have a general understanding of the different types of managed care, and understand whether your choice will include any coverage for out-of-network care (that’s generally only available on PPOs and POS plans). And you’ll want to make sure you understand whether your health plan will require referrals from a primary care provider. But as described below, there are several points to keep in mind as you’re comparing plans.

First, it’s important to note that the availability of the various managed care options differs quite a bit from one area to another. In general, when we look at individual/family plans available through the marketplace, POS plans are very rare, and PPO plans are much less common than HMOs and EPOs.

To give you an idea of how this varies from one area to another in the marketplace, there are, as of 2022:

So where you live will determine which types of managed care plans are available to you. Once you know what’s available, you can certainly take the managed care designs into consideration.

But there are several factors to keep in mind:

1. Make sure you understand your plan’s coverage of out-of-network care

Although a PPO or POS plan will “cover” out-of-network care, it’s important to understand how that works. Be aware of the deductible (which is likely to be quite high) and the out-of-pocket exposure (which could be unlimited).

This means that although your health plan may pay for some of the service (assuming you’ve met the out-of-network cost-sharing requirements), the provider can bill you for the portion of their charges that were above the amount the health plan paid.

All four types of managed care plans can have broad, narrow, or mid-size provider networks. Don’t assume anything. Instead, you’ll want to actively compare the provider networks of each plan you’re considering, to see whether your specific providers are in-network.

If you don’t currently have any providers, it’s a good idea to see whether each plan you’re considering has in-network hospitals and medical offices that would be convenient if you ended up needing medical care.

3. Managed care is different in the individual market

Individual/family plans aren’t the same as employer-sponsored plans, and that includes the provider networks and managed care rules. You may have had an employer-sponsored plan offered or administered by a particular insurer, but don’t assume that individual/family plans from that insurer will have the same provider network or managed care rules (for example, whether or not a referral is required).

Although you may have heard that HMOs and POS plans require a referral from a primary care physician in order to see a specialist, that’s not necessarily true. Again, you’ll need to check the specifics of the plans you’re considering. (And there are pros and cons to referral requirements. On one hand, they mean an additional office visit, which adds to your costs. But on the other hand, your PCP can help to ensure that you’re seeing the correct specialist, and can coordinate the care you receive from multiple specialists.)

So it’s important to understand your plan’s rules, and to ensure that your doctor has your health plan information so that they can submit prior authorization requests on your behalf. And if in doubt, it’s best to contact your health plan before a particular service is scheduled, to make sure you know whether prior authorization is necessary, and if so, whether it has been granted.

An HSA is not a type of managed care

If you’ve read this far, you may be wondering why a health savings account (HSA) isn’t listed here. It’s common to see comparison charts that include PPO, EPO, HMO, POS, and HSA (Health Savings Account). That leads many consumers to assume that the HSA acronym is a form of managed care – but it’s not.

HSA-qualified high-deductible health plans (HDHPs) allow enrollees to contribute pre-tax money to an HSA (you cannot contribute to an HSA unless you have active coverage under an HDHP). And HDHPs must conform to specific IRS rules. The IRS sets minimum deductibles and maximum out-of-pocket limits (which are lower than the maximum out-of-pocket limits that HHS sets for other plans), and limits the services that the plan can pay for before the deductible is met.

However, HDHPs can be PPOs, EPOs, HMOs, or POS plans. So this is an “and” scenario, rather than an “or” scenario. An HDHP will also be either a PPO, HMO, EPO, or POS plan.

The HDHP designation means that the plan conforms to the IRS rules for HSA-qualified plans. And the HMO, PPO, EPO, or POS designation describes the plan’s approach to managed care.

Don’t hesitate to ask questions about your managed care options

As always, you can turn to a broker or navigator if you need assistance with the process of comparing health plans and picking the one that will best meet your needs. Depending on when you’re applying for coverage, our guide to open enrollment and our guide to special enrollment periods will answer many of your questions.