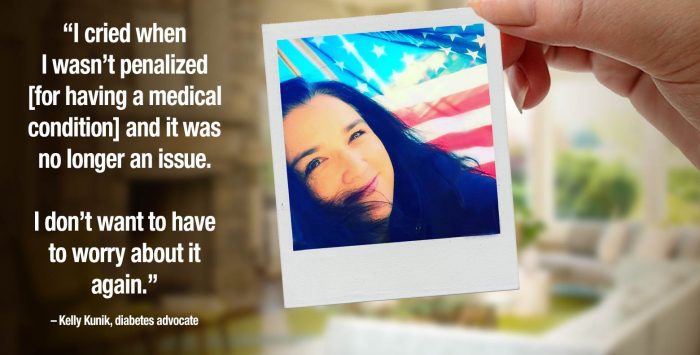 Kelly Kunik is watching Republican efforts to repeal Obamacare very closely. A diabetes advocate and blogger who was first diagnosed with Type 1 diabetes at the age of 8, she’s all too familiar with the challenges of buying health insurance with a pre-existing health condition before the Affordable Care Act became law.

Kunik says she fears that the bill currently under development in the Senate could be a real threat to people like her who rely on health insurance to cover the costs of managing a chronic illness.

“This [could] mean [once again] being labeled as someone with a pre-existing condition and paying for it in so many different ways, whether it’s through higher cost prescriptions or paying more for insurance every month,” she says.

Senate Republicans are currently writing a health care bill they hope to pass by the end of this month, before the July 4th recess. Deliberations are taking place behind closed doors, and the latest reports suggest the Senate has no intention of releasing a draft of the legislation before sending it to the Congressional Budget Office to be scored. Still, an outline of the Senate bill under development has started to emerge.

As both Axios and the New York Times reported last week, the Senate’s legislation is likely to allow states to waive some of the ACA’s regulations, though it departs from the House bill passed last month by ensuring that people with pre-existing conditions are guaranteed insurance coverage without having to pay higher rates.

This weekend, Vice President Pence reinforced the GOP’s commitment during a speech in Milwaukee by saying, “We’re going to make sure that every person with pre-existing conditions has access to the coverage and the care that they need, no exceptions.”

That’s a high bar to meet, and a promise that could come back to haunt Republicans.

Though members of the Senate claimed they’d scrap the House bill and start fresh, reports so far suggest not many changes are being made. Keeping the guarantee to cover pre-existing health conditions is of little value if other ACA protections don’t also remain in place.

“Not being able to discriminate against people with pre-existing conditions becomes pretty much meaningless when you get rid of other benefits,” says Sandy H. Ah, associate research professor with Georgetown University Health Policy Institute’s Center on Health Insurance Reforms. “They go hand in hand.”

Here, we talk about three ACA protections reported to be on the cutting room floor that could undermine coverage for people with pre-existing health conditions.

The Senate plan is likely to allow states to adopt waivers that would let them opt out of Obamacare’s requirement to cover 10 essential health benefits, such as preventive care, prescription drugs and mental health services. The goal is to lower insurance premiums, but it does so by making coverage less comprehensive, which would further shift costs to the chronically ill.

Consider what this could mean for someone like Kunik.

Prior to the ACA, many health plans didn’t cover services that were essential to the long-term health of people with chronic illness, such as prescription drugs – or, they excluded medications for which no generic alternative exists, such as the insulin Kunik relies on daily.

The pressure on the insurance industry to offer health plans with cheaper premiums and skimpier benefits will be high given the likelihood of much smaller tax credits available to purchase coverage. That dynamic is likely to play out even in states that don’t opt for a waiver to side step Obamacare’s essential health benefit requirement, as Urban Institute’s Linda Blumberg points out in the Washington Post.

In the individual market, Ah says, eliminating essential health benefits is likely to lead to a race to the bottom.

“No health insurer will want to offer a robust plan because they’ll get all the sick people. That’s the thing the ACA does, it levels the playing field for insurers,” Ah says.

The end result is that even patients with chronic illness willing and able to pay more for insurance could find plans with robust benefits increasingly scarce.

Like the House bill, the Senate may give states the ability to relax the ACA’s requirement that older people be charged no more than three times what young people pay for coverage, increasing the ratio to 5-to-1, or even higher in some cases.

The result is higher premiums for older, poorer people with less financial assistance to cover those costs.

According to the Kaiser Family Foundation’s comparison of tax credits between the ACA and the American Health Care Act, a 60-year old living in Nebraska earning about $30,000 per year would see an increase in premiums of 791% and be forced to spend 74% of her income on health insurance.

The Senate has signaled an interest in working income-based subsidies into the final bill, which would make financial assistance more generous than the House bill, but there’s no indication yet how it would compare to current law.

Finally, early reports suggest the Senate bill may lift the ACA’s requirement that plans provide consumers a rebate if insurers spend too high a percentage of premium dollars on non-medical expenses. According to the Congressional Budget Office (CBO), insurers paid a total of $2.4 billion between 2011 and 2014 in consumer rebates, and cut back on overhead spending by $1 billion in 2012 and 2013.

The impact the ACA’s medical loss ratio requirement may have been modest, but Ah says it’s just another provision that if eliminated, gives insurers greater freedom to deny claims.

The Affordable Care Act removed a burden for Kunik, who as a freelancer, depends on being able to get health insurance on the individual market.

“I cried when I wasn’t charged more for having a medical condition and it was no longer an issue,” she said. “I don’t want to have to worry about it again.”