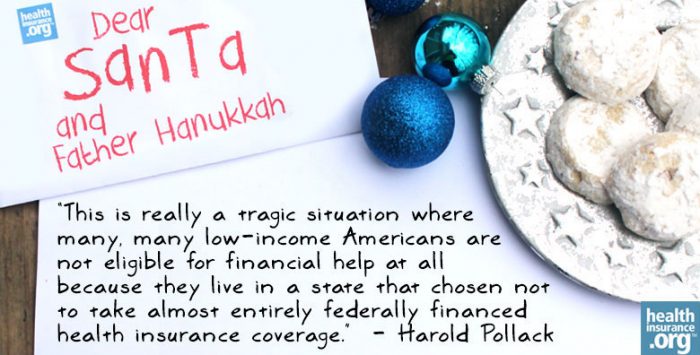 In a series of video “letters,” our blog contributors explain to Louise Norris the one gift they’d ask Santa – or perhaps Father Hannukah – to deliver that would build on recent health reform gains and extend Americans’ access to comprehensive, affordable coverage.

We’ve come a long way recently with health reform in this country but there are definitely still some changes and improvements that I think we’d all like to see that would make affordable health care more accessible and realistically available for more Americans.

Today I’m with Dr. Harold Pollack. He is the Helen Ross Professor at the School of Social Service Administration and he’s also president of the health politics and policy section of the American Political Science Association. And he frequently focuses on poverty and public health in his writing and is very widely published. His work has appeared in the New York Times, The New Republic, the Washington Post Wonkblog, and the Los Angeles Times among many others.

So welcome, Harold, and what would you like from Santa this year?

Harold Pollack: Great to talk to you. In the Santa-Father Hanukkah partnership, I’ve got a couple of things that I want to throw into the gift bag. The biggest one, of course, would be that every state embrace the Medicaid expansion that is made possible by the Affordable Care Act but made optional by the Supreme Court two years ago.

This is really a tragic situation where many, many low-income Americans are not eligible for financial help at all because they live in a state that chosen not to take almost entirely federally financed health insurance coverage and this has been a real problem for people with incomes below the federal poverty line and it’s also been a real problem for states, cities and counties that provide safety net health services and that are not getting paid because people are remaining uninsured.

Louise: Absolutely … great request. I think that there’s so much misunderstanding about the Affordable Care Act but one thing that I notice frequently in reading about the states where they haven’t expanded Medicaid is that in most of them – even very conservative states – there’s generally public support for Medicaid expansion. You know, it seems like the sort of thing that the public supports, that common sense supports and yet it’s still certainly a big problem. How many people are we talking about who are impacted by this?

Harold: Well there are different estimates … 4 or 5 million … and it depends a little bit on how many people … what happens with some states with Republican governors that are now looking to make compromises with the Obama administration … which I think is great.

Right now, almost 90 percent of the people affected live in the South and so some of the states that we really have to reach are the most conservative states in the country … and that may happen after President Obama leaves office. It took about seven years for Medicaid in the late 1960s to really reach all of the states except Arizona. So it may take awhile, but I’m convinced that Father Hannukah and Santa will eventually bring that in their gift bag … but there are a lot of people who can’t wait.

Louise: Absolutely. There really is no good option for people in that position. Paying full price for health insurance certainly is unrealistic when you’re living below the poverty line and you know I think that’s a commonly misunderstood part of this all is just how few options there are for people in that situation. When you’re on the outside looking in people who aren’t in that situation I think it’s sometimes hard to understand just how dire that situation can be.

Louise: Well, thank you very much, Harold. I think it’s a great request and hopefully Santa and all the powers that be are listening.

Harold: I certainly hope so. Nice to talk to you.

Louise: You, too. Thanks, Harold.