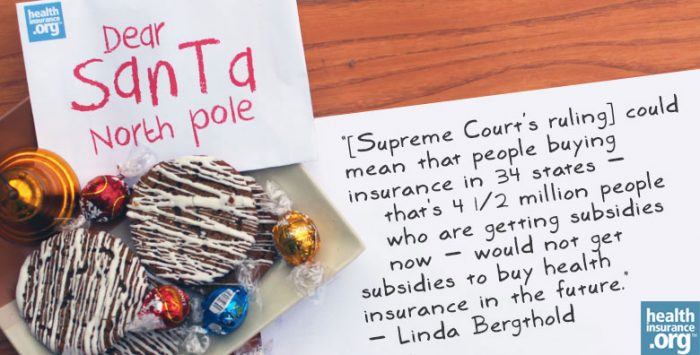 In a series of video “letters,” our blog contributors explain to host Louise Norris the one gift they’d ask Santa – or perhaps Hanukkah Harry – to deliver that would build on recent health reform gains by further improving the health reform law and, as a result, extend Americans’ access to comprehensive, affordable coverage.

In this segment: Linda Bergthold, healthcare consultant, former member of both the Clinton and Obama health reform teams, and blogger at Huffington Post.

Although we’ve come a long way with healthcare reform, there are changes and improvements that I think we’d all like to see in order to make affordable health care and health insurance more accessible to more Americans.

So today I’m joined with Dr. Linda Bergthold and she’s been a healthcare consultant and researcher for more than 25 years. She worked on the Clinton health reform plan and was also the head of the Obama healthcare blog team in 2008 and she also writes for the Huffington Post.

So Linda, welcome, and what would you ask Santa for.

Linda Bergthold: I would ask Santa to help keep the “affordable” in the Affordable Health Care Act. And the way Santa can do this – by the way, Santa probably is eligible for Medicare so he’s very lucky; he doesn’t have to worry about this – but for a lot of other people in the United States, there’s a wording issue in the Affordable Care Act that has come before the Supreme Court that has a lot of danger for the affordableness of healthcare in the future.

The Supreme Court has agreed to hear a case about some language in the act that suggests – and legal scholars will disagree about the details here – but that suggests that only people buying health insurance through a state-based exchange – such as one in Colorado or California or somewhere else – can get subsidies.

Louise: Absolutely, I agree. What would you … as far as people in all of these states that are run by HHS right now where their exchanges are using HealthCare.gov … what would you advise them to do right now. I mean we’re right in the middle of open enrollment. How does this impact them for the time being?

Linda: Buy insurance. Absolutely. Enroll and get insurance. Because we don’t know what the Supreme Court will decide. I mean, the Court could say, “Congress needs to fix this” and give it back to Congress, but Congress is going to be, the majority will be Republicans and it’s not clear that they would actually do something about that.

The Supreme Court could also decide that it was clear – reasonably clear – that the administration meant for everyone to be able to get subsidies whether they buy it federally or through the state. So we don’t know what will happen but in the meantime, people really ought to enroll because they will not roll back the subsidies you got this year.

Louise: Right. Ok. That’s a … I think that’s a really important point … so people don’t need to worry that their subsidies they get right now would be retroactively taken away … it would only be going forward?

Linda: Yes, and I would say there’s … worrying isn’t going to help, frankly. Nor will political action do much because the Court is pretty insulated from that kind of thing but from what I’ve read, legal scholars on both sides of this are concerned.

So I would just ask Santa, “Give everyone what you’ve got under Medicare. [laughs] That would be a good wish … and be sure that everyone who needs to get insured gets insured.

Louise: That’s a great request so hopefully, Santa AND the Supreme Court are listening.

Louise: Well thank you so much, Linda. I appreciate it.

Linda: You have a Happy Holiday!