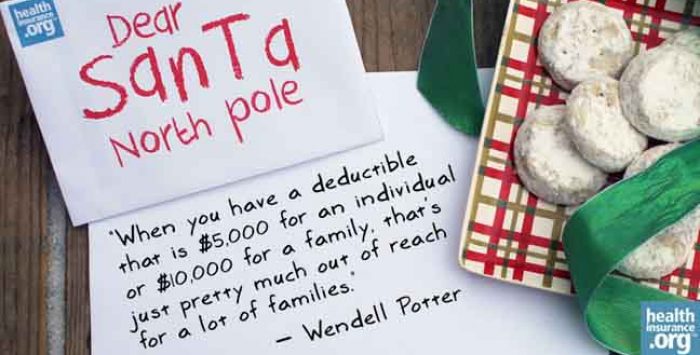 In a series of video “letters,” our blog contributors reveal to host Louise Norris what they’d request in a letter to Santa – or in Charle’s Gaba’s case Hannukah Harry – one gift that would build on recent health reform gains by further improving the health reform law and, as a result, extending Americans’ access to comprehensive, affordable coverage.
First up: health insurance industry whistle blower, author and health reform advocate Wendell Potter.

And today, I’m with Wendell Potter, who had a 20-year career as a corporate insurance executive and he was the head of communications at Cigna when he left that job in 2008 to advocate for comprehensive health care reform. And he went on to write a book called Deadly Spin which was awarded the Ridenhour Book Prize for Outstanding Work of Social Significance in 2011.

And he is now an analyst at the Center for Public Integrity and president of Wendell Potter Consulting. So Wendell, welcome, and tell us what you’d like from Santa.

Wendell: Well, thank you, Louise. What I’d like from Santa is for him to bring the American people some relief from the high deductibles that so many of us are having to pay. And one of the reasons I decided to leave my job in the health insurance industry was because of the trend toward moving more and more individuals and families to the high-deductible plans.

The reason I left was because they were being held out as something that really would work and be good plans for everyone almost pretty much depending on your income. But that’s just simply not the case for a lot of families … low- and middle- income families … those whose incomes are too high to for them to qualify for Medicaid but they’re not so high that they can get subsidies under the Affordable Care Act on the exchanges.

A lot of those folks are just not able to get the kinds of affordable coverage they would like to get and then when you’re faced with making high deductibles, it’s more than a lot of people can afford. So I think that’s one reason we’re going to be seeing that more and more people … well a lot of people … will simply not sign up for coverage and they choose to pay the penalty even though the penalties get higher each year for not getting coverage.

Louise: Absolutely. I think that’s a great point and, you know, the cost-sharing reductions … the cost-sharing subsidies in the ACA … are really beneficial for that particular reason in terms of lowering deductibles and lowering out-of-pocket expenses but of course they only extend up to 250 percent of poverty level and the really strong ones only extend up to 200 percent.

So maybe a possibility would be just extending those cost-sharing reductions higher, you know, to a higher income range to cover more people who definitely fit the definition of what you’re describing as median household income but maybe could have some relief from the deductibles in that regard.

Wendell: I think you’re exactly right. I think we need to have some changes to the legislation that would enable that kind of change to be made. Because … just as a situation … a lot of people are finding themselves buying coverage but really being underinsured because of these deductibles and their annual incomes.

And there’s no doubt … we’re seeing a lot of studies that are showing people are foregoing the care that they need. Sometimes they’re not picking up their prescriptions or getting the care that they need from their physicians just simply because they don’t have the out-of-pocket … they don’t have the money to spend to meet the deductibles before their coverage starts to kick in.

Louise: Absolutely. Great request. Here’s hoping that Santa and the people in charge are listening. So thank you very much, Wendell. Great talking with you.